The Tired Passion of Ricky Gervais

Despite the fact that Gervais has no trouble at all offending everyone, his courage is selective. 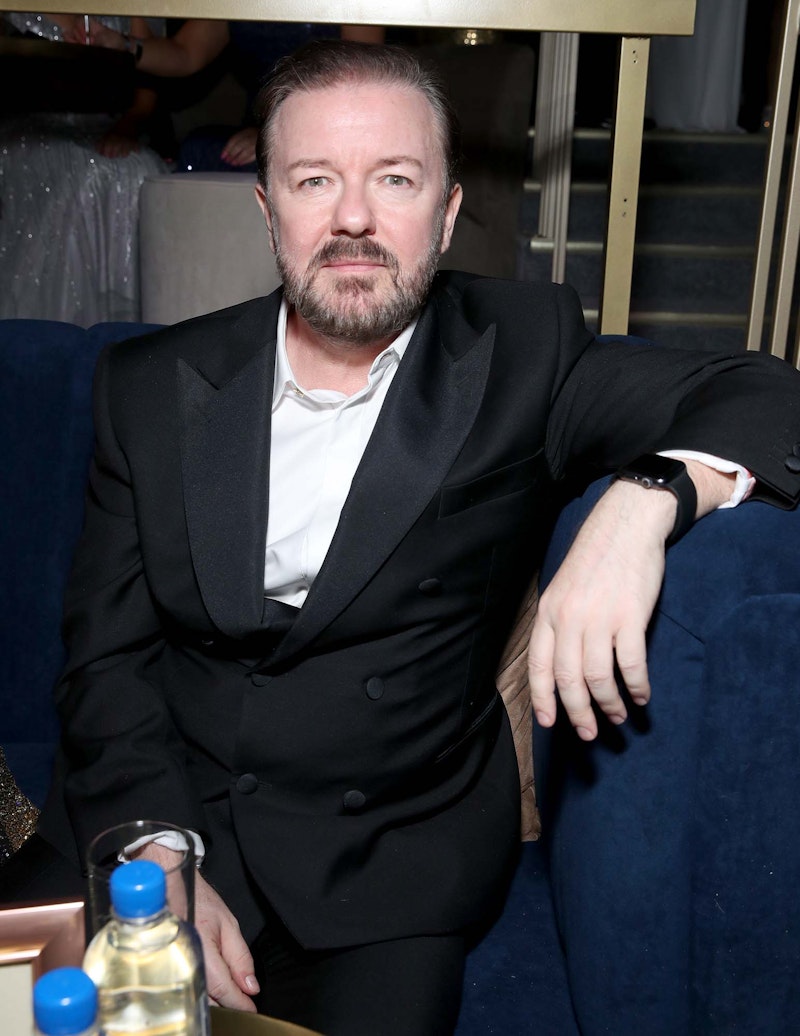 You don’t need a higher degree or training as a profiler to observe today’s patterns of politically correct society. Someone is bound to be offended but instead of complaining to a friend or just choosing to remain quiet, the offended parties take to social media and make aggressive announcements about how offended they are. In addition, the offense takes on a form of a pre-post-traumatic stress disorder. The offended parties are anticipating that they’ll have to seek a therapist in order to deal with the pain and suffering caused by… a joke.

It wasn’t surprising that the comedian Ricky Gervais received backlash (a phrase I detest and find repetitive and unimaginative) for his jokes about transgender people. After his new Netflix special, SuperNature, began streaming, GLAAD (among others) issued a statement about how awful Gervais is. This wasn’t an aesthetic judgment. Rather, GLAAD’s statement was warning the audience about the “graphic, dangerous, anti-trans rants” that Gervais was supposedly spouting.

It’s true that Gervais’ special was mostly a commentary on gender, which is a hot topic currently. The jokes weren’t polite, but then again, what joke is? Do GLAAD and other offended people want comedy to be polite? Hardly. The issue here is that Gervais said too many truthful things.

Almost immediately, he made fun of trans women: “Oh, women!,” Gervais said. “Not all women, I mean the old-fashioned ones. The old-fashioned women, the ones with wombs. Those fucking dinosaurs. I love the new women. They’re great, aren’t they? The new ones we’ve been seeing lately. The ones with beards and cocks. They’re as good as gold, I love them. And now the old-fashioned ones say, ‘Oh, they want to use our toilets.’ ‘Why shouldn’t they use your toilets?’ ‘For ladies!’ ‘They are ladies—look at their pronouns! What about this person isn’t a lady?’ ‘Well, his penis.’ ‘Her penis, you fucking bigot!’ ‘What if he rapes me?’ ‘What if she rapes you, you fucking TERF whore?’”

Gervais didn’t stop there. He made fun of gay men and AIDS too, saying that “all diseases let you down” at some point. Although that wasn’t the main thrust of his show, Gervais also touched upon religion. He’s repeatedly said he’s an atheist and doesn’t like anything that’s supernatural. “Nature is already super,” says Gervais. Being an atheist is neither here nor there, and shouldn’t play a part in comedy, but Gervais’ insistence that there’s nothing beyond this earthly realm gets repetitive. Just as some Christians may have been working hard to “save his soul,” Gervais works just as hard to “convert” the believers into unbelievers.

The trouble with comedy today is that it’s lost its main component, humor. We watch someone like Gervais because we know that he will “tell it like it is” and that he’ll have no issue offending everyone. In fact, he delights in it. But does this mean that it is funny? Because of the woke brigade’s (which is a minority) speech censorship, stand-up comedy has devolved into a game of “Who can say statements about the normality of life and not get canceled.” We laugh at simple statements, like “women don’t have penises. Women have vaginas.” Or, “men don’t have vaginas. Men have penises.” Culturally, we’re a dis-eased society because we’re arguing over basic biology.

Despite the fact that Gervais has no trouble at all offending everyone, his courage is selective, which is to say, his courage ceases to be courageous, and turns into sheepishness. Much of Gervais’ special deals with the notion of a comedian's distance from a joke. Most people take what comedians say to heart, and assume that the joke and the comedian are one and the same. This isn’t the case in any art form, and certainly not in comedy. Gervais makes a point in explaining what comedy ought to do, which in itself is not an enviable position. Comedians don’t have much material to work with because the society is so repressed as to not allow laughter.

In one instance, he uses “God’s voice” to make a joke about gay men, AIDS, and lesbians. “It’s not me,” he says, “That’s God.” In another, he makes sure to disclaim that he is pro-choice before making a few jokes about abortion. And finally, the biggest disclaimer was that he’s in full support of trans rights: “Full disclosure: In real life of course I support trans rights. I support all human rights, and trans rights are human rights. Live your best life. Use your preferred pronouns. Be the gender that you feel you are.”

These disclaimers are milquetoast, pre-emptive apologies, and I don’t think he should’ve done it. Perhaps he wants to assure us that he’s still a liberal and atheist, or perhaps to hear a few whoops in the audience from a few women who’ve had an abortion and are ready to shout it. The trouble is, all the jokes that he did make about trans people revealed the absurdity and contradictions of such an existence, so we’re left to wonder, why does Gervais insist that he supports trans rights if he thinks it’s absurd for a man to call himself a woman. Perhaps it has to do with the fact that comedy today, for the most part, is tied up in ideology, and Gervais is stuck in a loop of his own contradictions.