What happens when the chronicler of institutions becomes an institution unto himself? 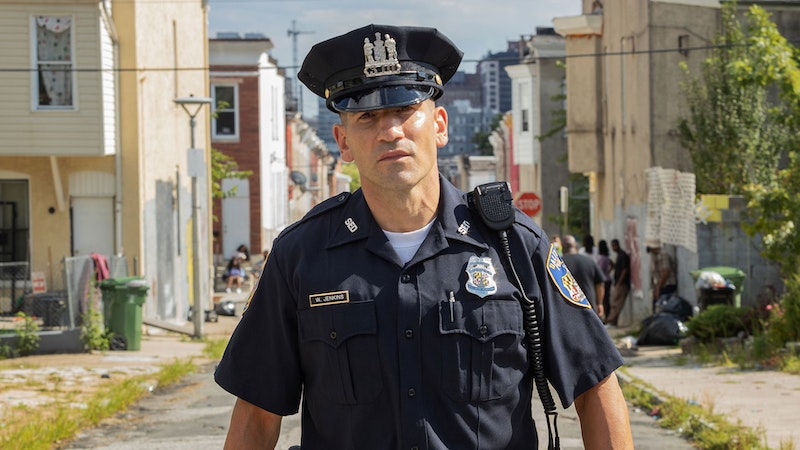 “Look at The Shield. Not to get into The Shield specifically, but nothing is more the quintessential American dramatic impulse than to make the individual bigger than the institutions which he serves. Vic Mackey, he is the id that rages well beyond the L.A.P.D. It’s ‘What is he capable of? What is he not capable of?’ The Wire has not only gone the opposite way, it’s resisted the idea that, in this post-modern America, individuals triumph over institutions. The institution is always bigger. It doesn’t tolerate that degree of individuality on any level for any length of time. These moments of epic characterization are inherently false. They’re all rooted in, like, old Westerns or something. Guy rides into town, cleans up the town, rides out of town. There’s no cleaning it up anymore. There’s no riding in, there’s no riding out. The town is what it is.”—David Simon, Interview with Undercover Black Man.

A friend alerted me the other day to a news article from The San Francisco Gate about a police officer caught masturbating at the scene of a domestic disturbance. After getting our laughs in at the grim absurdity of the story, I questioned what could possibly motivate such behavior. Was he dosed with LSD? Does he have a tumor that’s affecting his brain chemistry? “Of course not!” she laughed, unable to conceal her ridicule for my obtuse speculation when the simpler, more plausible explanation was right there in plain sight: he’s a cop who thought he could get away with it.

My harebrained conjectures are at least partially the byproduct of too much TV. Occam’s razor has no place in the trials of Law and Order or the forensic investigations of CSI, where obvious solutions to cases are never correct and only the most esoteric explanations prevail (as was the case in a recent, especially ludicrous Law and Order episode). This not only makes for better TV; it’s an essential component of televised copaganda, which depends on a portrayal of police work as highly specialized and methodical, suited to the likes of an Olivia Benson or Gil Grissom—neither of whom, to the best of my knowledge, ever jerked off at a crime scene.

The Baltimore-set cop dramas of David Simon—Homicide: Life on the Street, The Wire, and now We Own This City—have always felt like a blessed respite from mainstream network copaganda. True to his above sentiments, Simon avoids sensationalism, his focus rarely deviating from powerful institutions and their indifference toward those they govern. (My favorite line from The Wire: “It’s Baltimore, gentlemen. The gods will not save you.”) Even Homicide: Life on the Street, the most traditional cop show of the three (and for my money, Simon’s best series), punctuates every episode with shots of a white board, the names of homicide victims listed in black and red marker. Dramatic stakes aside, it’s still a game of numbers.

Aside from the great documentarian Frederick Wiseman, Simon is our preeminent chronicler of American institutions—an institution unto himself at this point. However, Simon’s chumminess with certain institutions, particularly the Baltimore police—dating back to his time chasing the police beat for the Baltimore Sun and shadowing the Homicide Unit for his book Homicide: A Year on the Killing Streets—does have its way of coloring his depictions. Further, his contention that The Shield is only interested in the “epic characterization” of Vic Mackey sounds like the words of someone who’s never watched the show. For all its faults, The Shield captured the militarization and escalating corruption of American police much more candidly than The Wire. Far from some sort of western hero or even antihero, Mackey’s a bully who internalizes all that bullshit American West mythology and enacts its violence onto those he’s sworn to protect. (He doesn’t triumph over any institutions. Apparently the gods won’t save you in Los Angeles, either.)

It’s therefore fitting that We Own This City (co-created with longtime collaborator George Pelecanos) ends up sharing so much in common with The Shield, its factual account of Baltimore’s real-life Gun Trace Task Force eerily mirroring the illegal escapades of The Shield’s fictional LA “Strike Team.” Like the Strike Team, the members of the GTTF received explicit encouragement from their superiors for their aggressive approach—carried out almost exclusively in poor neighborhoods of color—and were only taken down when their brazen misconduct ran afoul with the Feds. One could maybe chalk it all up to life imitating art were it not for the fact that The Shield was originally titled Rampart, a nod to yet another real-life police corruption scandal that served as inspiration for the series.

After seven seasons of The Shield, We Own This City ends up feeling like familiar territory, failing to serve much of a purpose beyond what author Justin Fenton (who appears as a reporter) already achieved with its source material. It’s a kick to watch Jon Bernthal make the most of his mid-Atlantic accent work as Sgt. Wayne Jenkins, or Josh Charles play against type as the thuggish Det. Daniel Hersl (a cop familiar to Baltimore rap heads for his targeted harassment of Young Moose, who appears as himself), but beyond obvious aesthetic differences and a 20-year time gap, there’s little that separates the prestige drama of We Own This City from the basic cable exploitation of The Shield. What Simon was all too quick to dismiss as “epic characterization” turned out to be business as usual for the cops in Baltimore.

To assume such bold corruption was exclusive to GTTF members would be naive, as Simon would probably agree, but he still can’t help himself from the borderline sanctification of “Good Police”—here personified by the late Det. Sean Suiter (Jamie Hector)—that characterizes much of his career, engaging in the same #NotAllCops, qualified pro-police discourse that he frequently takes part in on social media. The series seems to concede that Suiter wasn’t squeaky clean—but nevertheless depicts him as “one of the good ones” by its showrunner’s criteria, namely his eagerness to solve murders and his dissatisfaction with the drug war. Suiter bemoans the money spent on the drug war while murders go unsolved. A teacher at the city’s police academy (Treat Williams) echoes Suiter’s sentiments to Nicole Steele (Wunmi Mosaku), the DOJ civil rights lawyer appointed to oversee the city’s consent decree, calling the drug war “fucking stupid.” The essence of these scenes, supported by many of Simon’s own public statements, is that the drug war ruined police—never mind that American police were enforcers for the rich and powerful long before Richard Nixon.

I might not take such issue with the show’s politics if the dialogue wasn’t pedantic speechifying that seems lifted from its creator’s Twitter, like this exchange between Steele and poet/activist Tariq Toure after a poetry reading at The Bun Shop:

TOURE: Anybody who could keep Gray's killers on payroll, plus those brutal cops who are plastered in that long article in the Sun with their crimes on display, city payouts, right? And you cannot clean the floor with a bucket of dirty water, can you?

STEELE: Dirty water can still put out a fire.

I didn’t know you were allowed to change the premise of a metaphor like that. Forget the suggestion that the Baltimore Police could be meaningfully reformed without some fairly radical changes; this kind of dialogue offends me more as a writer than a proponent of defunding the police.

Simon and Pelecanos’ The Deuce suffered similarly from its characters’ not-so-subtle exchanges on social issues (mostly the ethics/politics of pornography and sex work), and much like that series, We Own This City fares better when it emphasizes the human impact of its hot-button topic, in this case the havoc that corrupt police wreak on the citizens they’re supposed to serve. In a later episode, Steele interviews James Otis (Thaddeus Street), a HVAC repairman who lost his job after Hersl arrested him and robbed him of a recently cashed paycheck. When Otis surmises that Hersl likely just blew the money at a bar, there’s a brief cutaway of Hersl doing exactly that, laughing it up with his meathead friends. The point is as straightforward as it is infuriating: one man’s livelihood becomes another man’s beer money.

Unfortunately the show rarely exhibits this level of clarity. There’s too much plot, awkwardly cramming several seasons’ worth of exposition into a mere six episodes. It’s competently made and entertaining enough, yet hamstrung by its confused relationship with the police department it depicts. Strangely, even more than The Shield, We Own This City reminds me of Magnum Force, Ted Post’s 1973 sequel to Dirty Harry. The premise of that film is that Harry Callahan (Clint Eastwood) is hunting a gang of traffic cops carrying out extrajudicial killings of known criminals. It’s a sequel that mostly feels like a half-apology for the “fascist medievalism” (per Pauline Kael) of its predecessor, torn between the old trigger-happy vision of policing and what might be called a conscience. Confronted by the corruption of the GTTF and its implications about the BPD and beyond, Simon’s likewise conflicted: has his career-long focus on institutional power given cover to the individuals those institutions protect? Does his dependence on cooperation with these individuals compromise his work? Is the drug war the main problem, or is the power of the police too intoxicating for anyone not to abuse? Is there such a thing as a good cop?

The show feels like Simon’s honest attempt to grapple with these questions. As anyone familiar with his work will attest, that’s the best we can hope for from any institution.