After Musk buys Twitter, who’ll stand as the final artist of the medium? 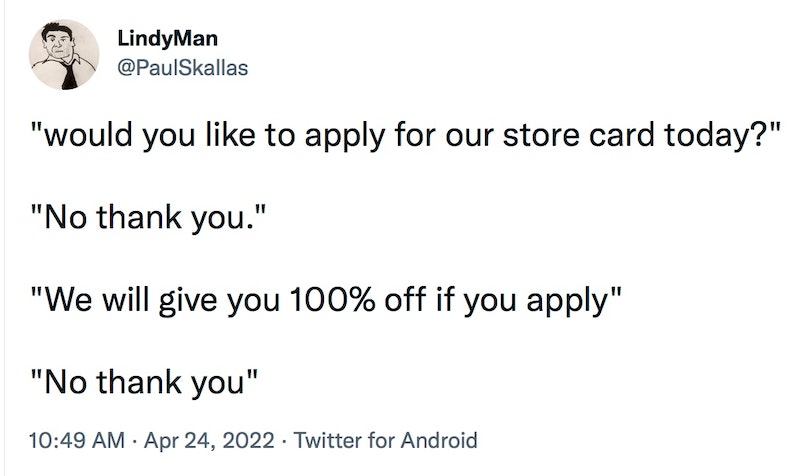 The longer something—whether it’s a car, a country, or clinical depression—has been around, it’s more likely to stick around, if you believe in the “Lindy effect.” A fairly obvious observation has recently created a very, very small group of people to “live Lindy”—in other words, taking walks, cooking your own dinner, and starting a family. What might appear or manifest as familiar conservatism or “trad” values are mostly just the slightly bent musings of one man, @LindyMan. He assures us that, “owning a dog as a pet is objectively Lindy,” but so is OnlyFans: “A woman taking her clothes off for money? I'm not sure that's going away anytime soon.”

Don’t worry about “living Lindy” or anything else Paul Skallas told The New York Times last year. Ezra Marcus’ profile wasn’t hostile but circumspect: “‘Back then’ is the ancient world, from which Mr. Skallas draws an inexhaustible supply of practical lessons. ‘No breakfast,’ he said. ‘Breakfast was unknown in early history, Rome, Byzantium, ancient Greece, breakfast wasn’t really a thing.’ He’s written about the anti-breakfast positions of Plutarch and Thomas Aquinas… In a 2020 Substack post outlining his ideas, he wrote, ‘Lindy exists chiefly for your protection, for risk/survival strategies in the modern world,’ with its constant onslaught of ‘new products, new academic disciplines, new books, new technologies, new foods, new living arrangements, new “theories” on life, new postures.’”

All you need to know about Paul Skallas, aka @LindyMan, is that he’s one of the last Twitter artists. If @dril jumpstarted the form in September 2008, @LindyMan is one of few originals left on the site. Jose Canseco and Cher’s calculated insanity is no longer novel; a reply from Ice-T isn’t the same; Donald Trump still hasn’t returned. @dril himself has long since lapsed into self-parody, and if Elon Musk’s perilous bid to buy Twitter actually goes through, the balance between high and low that makes the site what it is will be destroyed, and it’ll become something worse and less original. Whether it’s a food court-cum-hospice center like Facebook, or a graveyard like MySpace, it won’t have anything left to offer. Crazy people will no longer be able to tweet at CNN anchors, major corporations, celebrities, and politicians and actually get attention. This is a problem.

Lost in mergers and purges are true weirdos like Skallas, certainly not a luddite but idiosyncratic to say the least. As far as I know, he’s not selling any snake oil yet, so as a private citizen giving lifestyle advice that leans “trad,” he’s harmless, not a vulture. Selling “Lindy merch” wouldn’t be “lindy” in the first place. That’s not important: his Twitter is his canvas. Because of the lack of line breaks and the absence of the avatar, the effect is impossible without embedding, but here are some recent examples:

Mexico has a 100 million people

It borders the United States

But you don't anything about the country

What states. What provinces. What types of people.

It's all a mystery.

"but lindyman I can tell you about lughansk and odessa and the crimean tatars and the..."

Yes, LindyMan. What about Mexico?

Skallas’ writing is meant for Twitter, not a book or a high-profile interview. This tweet is a work of art:

"would you like to apply for our store card today?"

And then this: “Every ancient depiction of a man reclining is always to the left. There is a reason for that.” I don’t want any elaboration, I just want continued access to this man’s thoughts. They’re more amusing than anything on TV. The New York Times and others may have taken him too seriously and robbed a bit of the mystery (even though he’s been doxxed, @dril still hasn’t been profiled with a picture), but he’s not selling brain pills or LindyWater to plenty of people who would gladly buy anything with his name and endorsement. People go on “Lindy Walks”—also known as walking around—and whether or not they’re doing it “ironically,” they’re getting exercise. They’re living their lives. They’re being Lindy. I don’t think Twitter is Lindy, but he’s probably addressed this already—I’ll still keep drinking on that sweet, sweet garbage.