The Skin of Elizabeth Wurtzel

It's great and she'll tell you why. 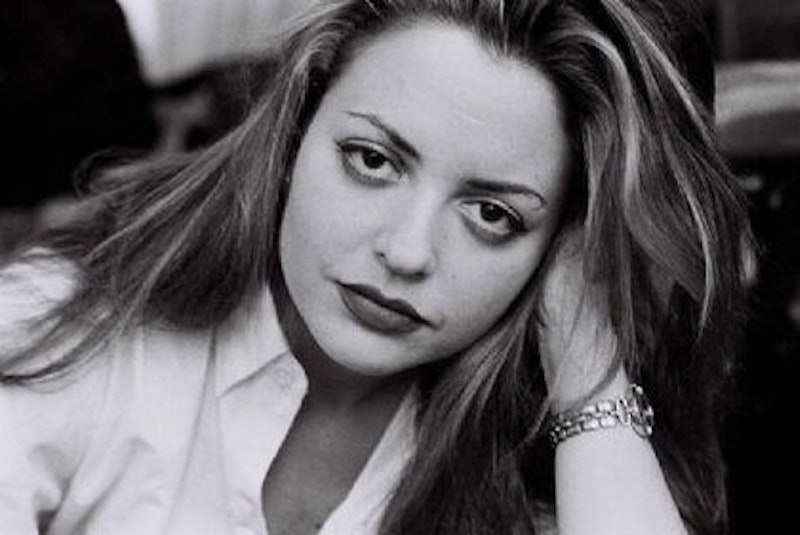 Nowadays we don't hear too much from Elizabeth Wurtzel, but she just shot a stream of poetry out of her throat at The Atlantic. She looks so young, she says. “When I told a gentleman that I am 45, he was shocked.” Why does she look so young? The answer: 1200 words of what sounds like an epic Scotch ad aimed at women in the 1990s. “I tell people what I need,” Wurtzel says. “I insist. I say what I want, which is the same as what I need.” She wears “very short skirts and very high heels whenever it is appropriate, and sometimes when it is not.” She puts Vitamin E on her lips, and she is “fiercely loyal” and “preternaturally truthful.”

Twenty years ago, when Wurtzel was 25 and not just looking it, people spoke her name because she wrote about her bold, bare-legged experiences on Prozac.

Twelve years ago they spoke her name, a little bit, because she said seeing the World Trade Center go down had been like watching an art project. Now she speaks her name, and she tells us about being a masterpiece. Live in the me would seem to be her advice: “Sometimes, maybe even a lot, I say things that are ridiculous. Sometimes I am ridiculous. There are worse things.”

Wurtzel says not to make predictions (“Only an idiot would prognosticate at all”) and not to ask what work people do. The advice is implied, of course. She tells us that she doesn't do these things, and she's the one with the young skin. Really, the premise of the article is that her way of life is admirable because of how she looks. Having decided that's her qualification, she then lets any damn thing out of her mouth. She looks the same throughout, so it must all be worthwhile. It's all her. “I wear sunscreen during the day and Retin-A at night. I do what I want.”

The Zen of her life is a tango danced atop a bar, with glasses splintered underneath and the chips dashing through her hair. She describes a hot spirit with a cool slouch, a passion freak who knows how to let those chips fall. Do what comes naturally and the small stuff gets winnowed out. “I do not worry about what is going to happen; I enjoy what is happening.”

She drinks red wine, but not for breakfast, and she likes it to have pomegranates because, hey. Admittedly, that cuts against the article's resemblance to a Scotch ad. But we also have this: “I choose my principles over my desires. But I will lose an argument over a matter of principle sooner than I will give in over a matter of honor.” Commercials for hard alcohol tend to get into the weighty stuff.

Wurtzel has no time for petty political games: “I have never spent days arguing over one or two percentage points that don't matter while lives really do hang in the balance—I mean: by nooses, from rafters, in barely lit basements, for real, out of actual despair, because of the failure of what is not a system at all.” She always votes liberal, as liberal as the system can get, nothing else will do. That's why she voted for Rudolph Giuliani, who was on the Liberal Party ticket. An “ex-boyfriend” explained to Wurtzel that the Liberal Party is not all that super-liberal, that really it's a front used by various New York politicians in their search for patronage. Wurtzel spends a couple hundred words arguing back. It was okay to vote for Giuliani because Steve Jobs was a crook. “I will let the train in vain of corrupt politicians run down someone else's track,” she says, winding up.

The gal-woman with the kicky lifestyle has a lot to teach. “Nothing is more bracing than not being concerned about what other people think,” Wurtzel says. Nobody's paying attention, she says, they're all too stuck on themselves. “Knowing this, I have no trouble being myself. It works well. I will die screaming.” Screaming at what? To tell the truth, I think she threw that in.

The gentleman who asked about Wurtzel's age was at a party in Williamsburg, a party where everyone but her was a kid. I imagine the guy backing away, eyes blank above his chin hair, as her answer rattles along. “I solve most problems with duct tape, and most problems can be solved with duct tape,” Wurtzel tells him. “I live with a wolf and a panther,” she rushes on. “Actually, a dog and a cat, both black, both very wild, it's better that way.” The young man nods, looks in the direction of the bar. “I am interested,” Wurtzel says. “I am interested in everything, except the things that aren't interesting, which is too much lately.” She says this last bit in a dying fall; her audience has flown. She's by herself with her great skin.