The Pathetic Desperation of Daniel Tosh

We all know the difference between funny and just plain ignorant. 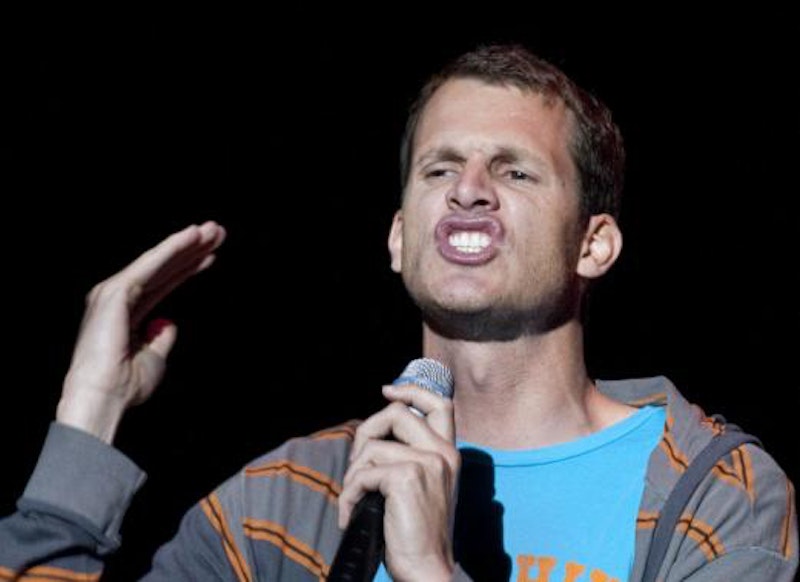 Despite all the justified outrage and shock over this week's incident involving media personality Daniel Tosh and a female audience member, there's a sad inevitability to these recent events. Tosh has cemented his role as an allegedly media-savvy humorist by hosting a low-rent Comedy Central program that recycles viral YouTube videos (often years old by the time the program airs) and in his own way has perfected what could be described as the Web 2.0/cable TV equivalent of a "Chinese waiter routine."

Whether someone is non-white, overweight, female, attractive, unattractive, poor, disabled, gay, transgender, or above or below an ideal height, Tosh takes it upon himself to make the easiest and crudest jokes mocking the subject for being different than him. His delivery typically displays a complete obliviousness towards any harm he might be causing, and he has legions of equally thoughtless fans.

So it's little surprise that after years of blandly offensive hack-comedy he’s graduated to simply threatening an audience member with rape. It's more direct than his perfunctory set-ups and punchlines and accomplishes basically the same goal. There are now petitions being circulated to remove him from the air and everyone appears to be weighing in on the matter. Curiously, perhaps because he made the threat while performing at a comedy club, much of the controversy has conflated what he did with the more common practice of "making rape jokes." Even more progressive publications such as Jezebel have taken this angle, publishing a helpful piece titled "How to Make a Rape Joke."

Meanwhile, the old comedy guard has dug in its heels as a clown car of overpaid white guys has plowed into the conversation, ensuring that nothing approaching constructive dialogue will occur. Comic after comic (so far virtually all white, male and heterosexual) have been regurgitating the same "comedy sheds light on the darkness" arguments that always arise when one of their own is in hot water. They constantly invoke the names of long-dead comedians like Lenny Bruce and George Carlin, misattributing all sorts of attitudes and philosophies to their lives and work like something out of Animal Farm.

Stand-up comedy is not the same socially subversive forum it once was. If "button pushing" was ever an effective method of exploring taboos and hypocrisies, that time has long since passed. What has remained is a rigid and unyielding informal caucus of supporters for the right of comedians to operate without fear of criticism. A threat (even an empty one) is not a joke, and it is not protected speech. Of course, that doesn't stop the cries of "censorship" and the usual game of rally-around-the-shithead.

That's because while these comedians ostensibly make their livelihoods from entertaining people, they nevertheless form a powerful and deeply influential institution not unlike the military and law enforcement. Shutting down dissent and using their platforms to dismiss and drown out any criticism is crucial to maintaining the niche they've carved out for themselves. Comedy might be art, but it's also a multi-billion dollar industry with roots in every imaginable form of media. And it's something these bloated dinosaurs are rightfully afraid is in the process of changing.

Though the loudest voices in the Twitterverse might suggest otherwise, comedians and comic performers are coming from an increasingly diverse array of backgrounds. More women, people of color, and members of the LGBTQ community are involved in comedy than ever before, and achieving the mainstream success their straight and white male counterparts have taken for granted for decades. The worst thing one can call a comic is not "offensive" or "disgusting" or even "unfunny." What they fear most is irrelevancy. They're relics of a tradition that was much less inclusive than today, and their desperation shows that deep down they know their days are numbered.