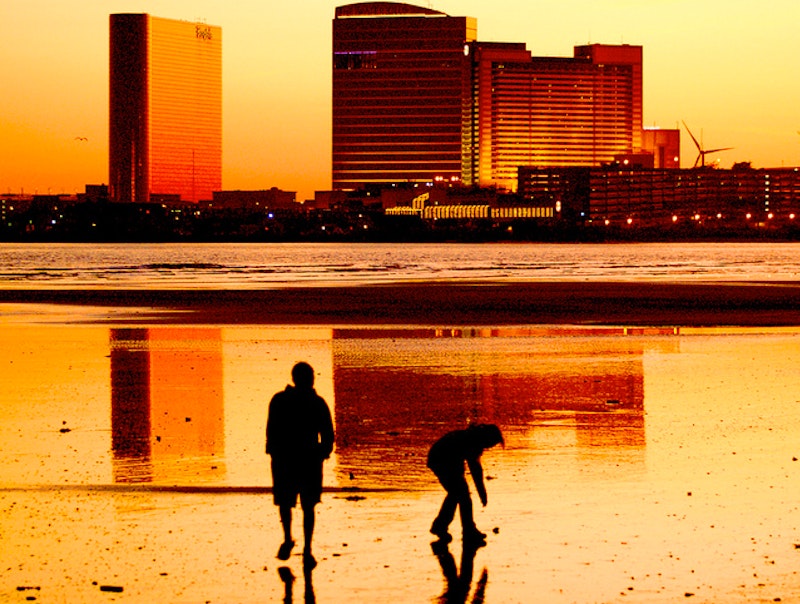 Head north over the bridge from Atlantic City, across Absecon Inlet, past the Borgata and Harrah's and the other uptown casinos and you'll end up in Brigantine, a quiet beach town not unlike dozens of others all up and down the East coast: renovated condos, a couple of surf shops, bait and tackle stands, culinary options that range from broiled crab cake to fried crab cake. I spent five days there last week with my girlfriend and her family, avoiding the sun in favor of the 1/1 no-limit game at Bally's, taking money off drunk tourists who've only played poker in their friend's kitchen.

I'm not much for the beach. As a kid I spent part of every summer at the Jersey shore, usually in Sea Isle City, about an hour south of Brigantine, where my uncle's parents owned a run-down rental. I'd go with my parents, aunt and uncle and my two cousins, one a year younger than me, one a year older, and I loved it. But skee-ball is more fun when you're 10 and that rental was torn down years ago. So until last week I hadn't been to the beach in probably ten years, which really is okay with me: I don't sun bathe, I hate sand and seaweed, I don't even own shorts. But I do gamble, hence my agreeing to this trip.

When Atlantic City legalized casino gambling in 1976, the unemployment rate was nearly 20 percent, more than twice the national average. About a third of the city's residents had left. Luxury hotels like the Traymore and the Marlborough-Blenheim had been demolished. Poverty reigned. What was once perhaps the country's premier resort town looked devastated. The casinos were supposed to fix all that.

The Resorts Casino Hotel was Atlantic City's first casino, opened on May 26, 1978, the construction so rushed that the casino lacked enough licensed dealers to run more than a few of its 80 table games. Gov. Brendan Byrne cut the ribbon, though he refused to make the first bet (in fact it was Sinatra-wannabe Steve Lawrence who made the first bet, losing $10 in craps in very un-Sinatra fashion).

In 1988, the year the last of 12 casinos opened, more than 33 million tourists visited Atlantic City. The number of jobs had nearly tripled, with most of them provided directly by the casinos. Then the recession hit, Las Vegas made a (family-friendly) comeback and Connecticut legalized gambling on Pequot tribal lands (Foxwoods and Mohegan Sun are currently the two largest casinos in the U.S.). By the early 90s, nearly every casino in Atlantic City was down in revenue. Still, construction went on. The Atlantic City Redevelopment Authority struck a deal with mogul Steve Wynn to build a new casino on the barren shores northwest of the Marina. The Borgata opened in 2003, and is, without a doubt, the nicest casino in Atlantic City. Many of the downtown casinos—Bally's, the Tropicana—are squalid. Walk past the overpriced retail stores at the Tropicana, for example, and into the casino and you'll think you've fallen into some kind of carny gulag. Not so at the Borgata. I spent a couple of days there at the Racebook, the only simulcast room where I've ever felt underdressed.

My girlfriend's parents actually met in Atlantic City. Her mom was a dancer and her dad had done lighting and sets back when the casinos still had huge variety shows. Those are all gone now. Instead, billboards on the Atlantic City Expressway advertise Kathy Griffin and Carlos Santana. As we drove around downtown her mom talked about unkept promises: neighborhoods that were never re-habbed, families never lifted out of poverty. A survey in 2000 found that nearly half the residents living in Bungalow Park and the Marina, more than 90% of them black and Latino, had no high school diploma. 47% of kids lived in single-parent homes. Unemployment and violent crime remains high. Later that day I read a newspaper article about yet another murder, this one a 21-year-old father of two, active in the local Boys and Girls Club, shot twice near Brigantine Boulevard Playground. "It's another sad tragedy in our community," City Councilman Mo Delgado said. "We have to find a way, a solution somewhere." A few blocks away, the lights flash, waitresses make the rounds, and the money never stops.