It's Heave-Ho Time For Flo

The joke’s over, but it never really began. 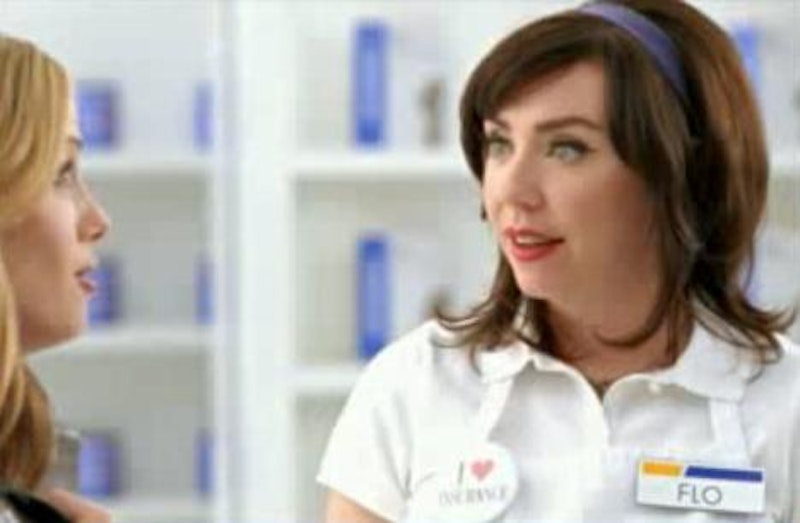 Oversaturation is death for televised novelty. This is why the Geico cavemen were played before their NBC sitcom had a chance to bomb, and why Old Spice Guy never got the chance to fully wear out his welcome. Too much is too much. Too much, for the perkily neurotic Progressive mascot Flo—first introduced in 2008, if you can believe that—was at least a dozen commercials back down the trail.

Consider this: a “Flo-bot” was been introduced to shadow Flo on some Small Wonder bullshit. All across the Internet, hobbyists, collectors, and losers are enquiring as to where they can acquire Flo bobble-heads. One of Flo’s associates is tasked with prancing around in gigantic dollar sign outfit. Two or three constellations of minor supporting characters, including a pair of gray-suited insurance competitors/Organization Men, are part of a recurring cast, and there is a commercial where those dudes appear in a “men of competing insurance company” calendar. Flo has a Wikipedia entry. We’ve actually seen Flo’s horrible driver’s license picture.

At some point, the Flo ads evolved from a gimmick into their own separate pseudo-sitcom reality where customers really did wander into a glowing, pseudo-Beyonder-verse realm to buy coverage—as opposed to just shopping for it online, which I guess is what the retail setting in these ads was originally supposed to simulate on some level. I think the word I’m looking for here is “overkill,” because I’ve reached a point where I feel like I know way, way too much about a tableau of purportedly one-dimensional characters invented to sell insurance because a zillion commercials were made and broadcast infinitum. Worse, the concept was never funny to begin with; it was merely tolerable. At least Allstate’s “Mayhem” spots are darkly, anarchically humorous, and the ones where random actors start talking like Dennis Haysbert while pimping the brand are mesmerizingly uncomfortable. Flo and her vanilla retinue just make me wanna put my head through my television screen.

If the dude from the “Why Ask Why” ad campaign can trade up for semi-movie stardom, there’s no reason Stephanie Courtney can’t transcend that without breaking a sweat—which is just a small part of why it’s high time that Flo and her good-natured corniness shipped out permanently.