From Halle Berry to Cate Blanchett, Fab to Drab. 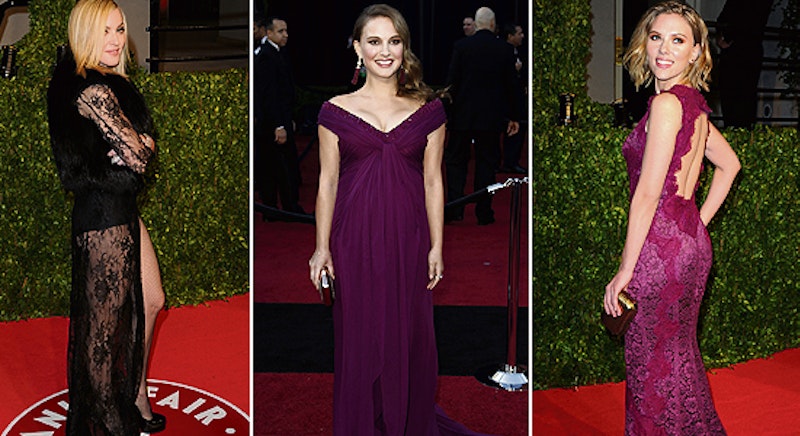 The best part about watching The Oscars is picking on everybody’s outfits the next day. Were they FAB or DRAB? Who wore it better? I’ve seen so many award shows, and I just do not understand DRAB red carpet outfits. How could your stylist/make up artist/gay possibly let you out of the house looking like that? You are going to The Oscars, not the local Big Lots, people.

We want our favorite stars to look great, and Sharon Stone, Gwyneth Paltrow, and Hilary Swank all looked amazing. The more you think about it, it’s like the Red Carpet is a petting zoo, and celebrities are like really fabulous, very expensive animals we get to pet from the other side of our television screens. Read on to find out which celebrity animals were fab or drab last night. Lash out about your picks for best and worst dressed in the comments!

Academy Award winner J. Hud looked stunning last night in her voluminous, tangerine Versace gown. She’s totally working her brand new figure. Only, her face was a smidge darker than the rest of her body, so just lighten up on the bronzer next time, girlfriend. And what’s the story with that major pancake boob? Sometimes I wish I could be Jennifer Hudson. She’s all, Hello, America. I was a contestant on American Idol and I was so about to win. But then you bitches voted me off when I was in the Top 7. That’s okay, though. Because I played a starring role in a movie next to Beyoncé and like won an Oscar and everything. Now I’ve lost 50 pounds and I look fabulous!

Everybody knew Natalie Portman, Harvard ’03, would capture the Best Actress Award for her performance in Black Swan. Her acceptance speech was lucid, compelling, and heartfelt. But why didn’t her people get her in a better outfit? Don’t come at me with the “she’s pregnant” excuse. There are fabulous maternity gowns out there. I didn’t really mind her purple Rodarte look, but I hated those tassel earrings. I don’t care if they’re Tiffany’s—what is this, a graduation ceremony?

You know, it’s really hard for dudes to make a fashion statement at any awards ceremony. We’re just supposed to show up in a black tux and STFU. But Academy Award nominee Jesse Eisenberg rolled in to the Oscars super low-key in a penguin suit designed by Band of Outsiders. He just looked so cool, and his disheveled hair gave him a cool edge. He’s like, Oscars? Whatever, dude. When’s the after party?

An Oscar-snubbed Andrew Garfield, of The Social Network, showed up extra dapper in a Louis Vuitton tuxedo and matching shoes. He was definitely one of the best-dressed guys at the awards ceremony, which doesn’t really say much as far as tuxedos are concerned. But I do have a thing for tall skinny white dudes, so there’s that.

Everybody’s favorite spaz Christian Bale won the Oscar for Best Supporting Actor for The Fighter, an award he got for basically losing a ton of weight. How’d he do it? "Oh I do a lot of coke whenever I lose weight. I'm not sure if it's so funny for this movie, to say that" he “joked” to The Huffington Post. This Oscar win is great, so congratulations and everything. But somebody please tell dude he’s gotta get rid of that facial hair. I mean, unless he’s preparing for a new role as a gay leather daddy in San Francisco, circa 1973.

A golden, statuesque Halle Berry killed it in a nude-colored, bedazzled explosion of organza designed by the house of Marchesa. Why can’t all red carpet ladies look this fierce? The nude color easily complimented Halle’s skin tone, a lesson that pale white people everywhere should learn right now about wearing nude colors: IF YOU’RE TOO PALE IT WASHES YOU OUT. (This is for you, Hailee Steinfeld and Mandy Moore). I love Halle’s short ‘do. What an excellent way to show off her long neck. I would so be lesbian with Halle Berry.

Reese Witherspoon hit the Red Carpet in a simple but elegant formfitting black 1960s inspired gown with white detailing, designed by the eternally fabulous house of Armani Privé. Girlfriend accessorized with emerald jewelry, which kicked the look up a couple notches. But what is really going on with that clip-on ponytail? That god Beyoncé’s wind machine wasn’t there to snatch that ponytail right out. Red Carpet Rule # 1: MAKE SURE YOUR WEAVE IS IN TIGHT.

The secret to living a successful life is having as many outfit changes in one day as possible. Anne rocked out with her tits out in all eight of her outfit changes Sunday night, but I especially loved the Lanvin tux. And, wow, that stone colored, Vegas-style Oscar de la Renta piece de resistance with all that fringe was the bomb. And my last favorite Anne Hathaway look was that electric blue Armani Privé piece. I am wearing it right now. The thing to remember with any fashion is it’s not about the body, because the same dress on two different people is really two different dresses. The gay who styled Anne last night deserves his own Oscar.

But the real question on the tip of everybody’s lips re: Oscar fashion is: what exactly did James Franco take on Sunday, and how can I get some?