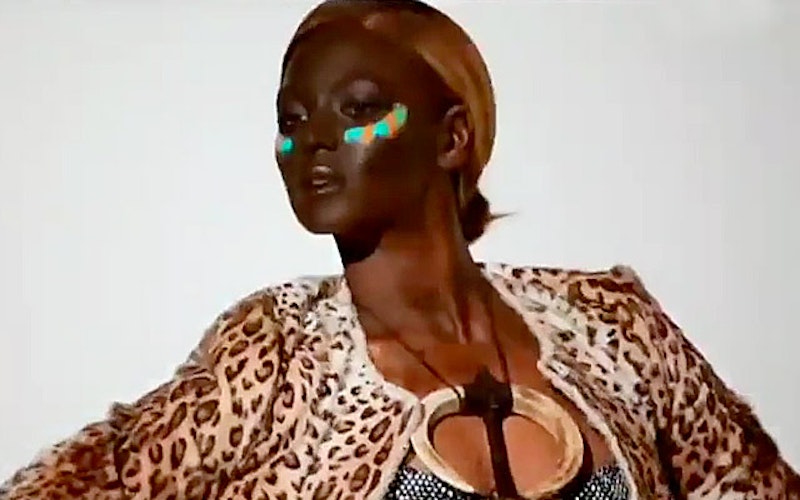 Girl, Beyoncé’s ass got herself into some real trouble this week. The cause is her controversial March cover of the French high fashion glossy L’Officiel, a special 90th Anniversary issue meant to pay tribute to Nigerian musician and human rights activist Fela Kuti. That’s Fela of the musical Fela!, of course, which Beyoncé’s baby daddy Jay-Z produces. The spread features images of an Africanized Beyoncé returning to her “roots,” which as usual can only be done by wearing animal print and bones, and by painting her face several shades darker than it actually is.

But how racist is all this, really?

Bloggers from high and low have panned the spread as yet another insensitive attempt by the fashion industry to use “race” and skin tone to achieve a certain kind of edginess and avant-gardism in fashion editorial. Dodai Stewart of Jezebel had this to say: “It's fun to play with fashion and makeup, and fashion has a history of provocation and pushing boundaries. But when you paint your face darker in order to look more ‘African,’ aren't you reducing an entire continent, full of different nations, tribes, cultures and histories, into one brown color? What makes someone black—or African, for that matter—is not her skin tone. The African diaspora reaches from Brazil to Haiti to the United Kingdom and Pakistan.”

It’s true that fashion all-too-readily relies on racial stereotyping to drum up buzz. A very sexy looking Daria Werbowy sweltered in a room full of black people in a “controversial” May 2010 editorial in Interview. Lara Stone, Chanel Iman, and other top models have all shot a picture in blackface. Hell, they even did it on America’s Next Top Model once where the models each had to be a different race.

On the one hand, fashion people who complain about blackface are simply tired of the gimmick. It’s just too easy to pretend to make a statement by throwing your models in a pool of chocolate and calling it shocking. Historically speaking, blackface was used not only to make fun of black people, in films such as Birth of A Nation, but it was also about portraying/characterizing black people on stage at a time when black people weren’t allowed to be there in the first place.

When Dorothy Dandridge was set to play the role of Cleopatra in the 1963 film of the same title, Hollywood studios were nervous about having the role be played by a black woman, even one as transracial as Dorothy Dandridge. As we all know, the role ultimately went to Elizabeth Taylor, but the irony is that the role only went to her after the famed make up artist Max Factor developed a particular shade of make up, “Egyptian,” that really convinced the studios that the white Elizabeth Taylor could play the role and still look just as exotic. So exoticism is something you can put on and take off?

With blackface, the insult is that it’s cool to play black if you’re white. But at the end of the day you get to wipe off your make up and go back to having excellent credit, a big house, and being white overall. But the more I look at the image, the more I wonder if it’s as bad as everybody says it is. Does this mean that anytime somebody paints their face dark, people are going to scream racism?

I was at a Subway in New Haven yesterday and two black ladies were arguing about the Beyoncé controversy. And they were dead serious about it. “People always gotta be saying something is racist. Why can’t they just leave her alone? Leave Bey alone!” For these black women, whether or not they had read Henry Louis Gates or Manning Marable, the Beyoncé images were beautiful. They didn’t perceive any racism, and were more concerned with “the media” trying to bring a “sista down” than they were with the illusion of Beyoncé trying to plug herself back to her roots. Their conversation really stuck with me, because it made me wonder if the offended population doesn’t see the pictures as racist, are they? Is it racist to accuse anything Africanized as racist?

The real issue for me is that the only time black women ever make news in fashion is when there are too few of them and people are talking about how we need more; when they’re too light, as in the 2008 Beyoncé L’Oréal ad where her skin was lightened and her features Europeanized. Then there’s the other extreme, where black women only make the news in fashion when they’re in blackface or too dark. Why are we so extreme when it comes to race?

Anyway. Do these blackface Beyoncé images remind anybody else of King Jaffe Joffer from Coming to America, one of the most iconic movies in the black community? After seeing the spread, I kind of want to put on a huge headdress and get followed around by scantily clad dancers everywhere I go. “The royal penis is clean, your highness.”