The Lost Lure of Hitchhiking

It was back in the early 1970s, I was in my teens, and I went from Chippewa Falls, Wisconsin to New York City. 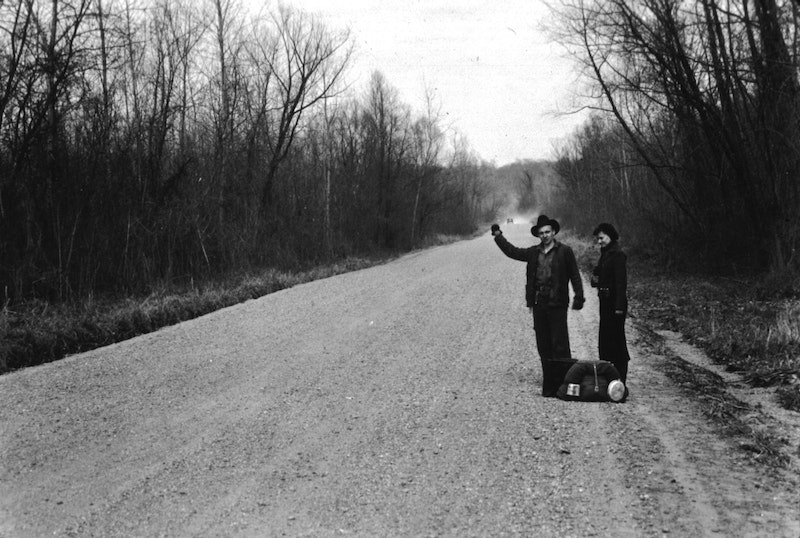 Maybe I don’t get around enough anymore, but I have the impression that members of today’s youth not only have never hitchhiked, they have no idea what hitchhiking was all about.

Was hitchhiking ever a real thing? is the hidden question when the issue comes up. Rather like: Did hobos really steal pies from windowsills?

The answer is yes—and yes. But you can see why the under-40 kiddies might imagine hitchhiking to be romanticized fiction. The Wall Street Journal recently ran a misty-eyed column on the subject, all boomer nostalgia (“My children will never hitchhike… never know the adventure or the mystery.”) without any clue about why people did it or why it went away.

Popular impressions of hitchhiking today come out of old movies. There’s Clark Gable munching carrots and striking a wiseguy stance in It Happened One Night (1934) as he shows off thumb techniques to Claudette Colbert on a quiet country road. Clark fails with couple of tries, whereupon Claudette hikes her skirt and shows off a shapely knee and calf. A flivver screeches to a halt.

A few years later we get Henry Fonda as cloth-capped Tom Joad in the opening scene of The Grapes of Wrath (1940). Okie Tom is hitching his way from state prison to his sharecropper homestead, and spots a truck driver at a roadside eatery. The uptight trucker points to the NO HITCHHIKERS sign on his windshield, but then Tom wheedles him, saying the driver he looks like the kind of good guy who’ll give a fella a lift, even if the boss-man forces him to wear a sign.

Young people today would probably offer a pat explanation for all this ride-begging. “It was the Depression, and everyone was poor, and that’s how people had to get around.” Which is nonsense in so many ways. At least through the 1970s hitchhiking was a popular and accepted form of travel. It flourished among backpackers, college students, and servicemen. If you were on a long drive and spotted a swabbie with his thumb out, you might very well stop to pick him up. It was your patriotic duty. “Hello sailor—going far?”

Hitchhiking served the driver as much as the hitcher. Long hours alone on the road with nothing but fuzzy AM radio frequencies to keep you company—no podcasts, Sirius, CD players or even cassette tapes—was mind-deadening and brought on white-line fever. You got starved for company, wanted someone at least mildly chatty to share your boredom, recount convivial adventures in Subic Bay, and maybe explain the economic underpinnings of Elkhart, Indiana (RV and trailer manufacturing) or Sandusky, Ohio (machine tools).

Hitchhiking faded out for two main reasons, and prosperity was not one of them. Neither was fear of abduction and sexual assault. A root, long-term reason was the dominance of interstate highways. While it was usually okay to thumb a ride on a state road or U.S. highway, on interstates that was a no-no. You had to find a spot a little ahead of an on-ramp. It was safer than standing on the highway, but it cut down drastically on your available rides when you were in the middle of nowhere.

The other big reason is that military enlistees were the backbone of hitchhike culture, and generosity toward them dried up during the Vietnam era. People saw army privates loitering at the crossroads, and suspected they were dangerous lowlifes up to no good. They might well be junkies who fragged their sergeant back in Canh Cho. Quite a paradigm shift there; one more legacy of Vietnam.

I made only one hitchhiking trip of any meaningful distance. It was back in the early 1970s, I was in my teens, and I went from Chippewa Falls, Wisconsin to New York City. It was a decent trip, not too much sleeping-rough. I visited a well-off young couple in Evanston, Illinois—friends of friends—for a couple of nights, and 30 hours later I was crossing the pedestrian walkway of the George Washington Bridge. I can recall a dinner of turkey and gravy at a Howard Johnson’s someplace in Ohio, a breakfast of coffee and doughnuts on the Pennsylvania Turnpike (where my driver had stopped for something more substantial), and finally a long wait near a truck stop in Bethlehem, PA.

My last leg was with a young guy who was appalled at the idea of dumping me off near the GWB in Fort Lee. A true North Jersey suburbanite, he was terrified at the idea going into the Big City, and couldn’t fathom that someone hitchhiking from Wisconsin would be able to find her way around.

The only hard part was getting out of Chicago. My Harvard MBA friends in Evanston had checked their roadmap and told me I should catch a ride out of the city via the Dan Ryan Expressway. I despaired and sweated for an hour near a freeway ramp by Comiskey Park. This was around July 1, with a blazing late-morning sun. Hitchhiking wasn’t done on the South Side of Chicago, apparently. So different from central Wisconsin, where plump, apple-cheeked schoolteacher ladies were happy to drive you as far as the shopping center in Eau Claire or La Crosse, and even told you a good place to catch your next ride.

So I waited near Comiskey, and at long last a black man in a yellow bell-bottomed suit and matching Superfly hat stopped, and got me to Indiana. He was much more wary than I was: “You don’t have a gun, do you?”

My next ride was with a freshly commissioned West Point graduate with his new wife and friend. They were driving either to or from Michigan from whence they were moving furniture. The new lieutenant had to report to duty the following week, and they were in a rush and full of fun, telling me their own adventures of the road. Inevitably, one of them had a story about hitchhiking to Woodstock in 1969.

Only once did I come close to being killed, and that was just because the driver was a stoner. This was near the Wisconsin-Illinois border. I was hitching alongside a backpacking couple outside Janesville, and we got picked up by a shirtless surfer guy in a wood-paneled VW Camper. Not a local. Somebody aboard had marijuana, and it got passed around in a Dr. Grabow-type tobacco pipe. With one hand on the wheel, our blond, tanned driver kept turning around to take the pipe and joke with his passengers. We were on a two-lane blacktop, looking for the freeway, when a car from the other direction jumped across the dotted line to pass a lumbering RV. Surfer dude glanced ahead just in time, and swung the Camper hard to the right, halfway onto the shoulder. “Oh wow,” somebody said, as the dude pulled back onto the road and handed back the pipe.