Welcome to the Post-Comedy Era

Laughs are rare, but maybe it can make you a better person. 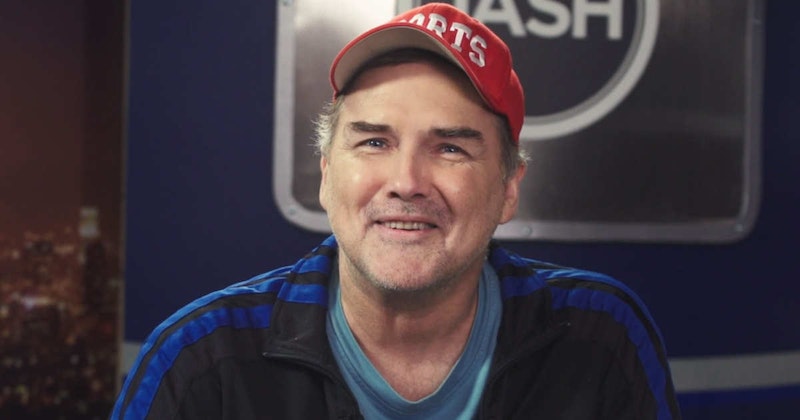 Comedian Norm Macdonald’s been very funny for decades now, but his humor isn’t particularly political. Now that Trump’s president and fear is rampant, many of his fellow comics have felt compelled, as society’s truth-tellers, to enlist as soldiers in the #Resistance. The Canadian comedian declined to join the pack. He’s not a liberal, so it’s hardly surprising, but according to New Yorker staff writer Troy Patterson, this choice of working apolitically “is itself a political stance that may require, at present, a defense more robust than he cares to muster.”

When Patterson disingenuously states that Macdonald not doing political comedy is a political stance, he’s really saying, “If you’re not with us, then you’re against us.” Strident, anti-Trump comedy’s the only acceptable approach “at present.” If he did conservative-leaning comedy and made pro-Trump jokes, this would also be a political stance that Patterson would say “required” a defense. In other words, all comedy—even the nonpolitical variety—entails taking a political stance, but only anti-Trump comedy doesn’t require a defense. Such is the logic of the New York City media, which believes it has the job of making new cultural rules and calling out iconoclasts like Macdonald who don’t give a damn what they think.

This is the same elite group that believes the perfect response to today’s dizzying and often depressing news environment is to have all the NYC-based late-night comic shows bombard us with anti-Trump material because we need to restore some balance before we go to bed. No longer can we be allowed to kick back before bedtime and escape the political grind with a few good laughs. There’s just too much at stake now to engage in such frivolity.

Trevor Noah and John Oliver dish out smugness disguised as humor nightly, but don’t bother accusing them of being unfunny because they have a higher calling than merely cracking us up, at present. Making us laugh isn’t their main job any more. Jimmy Kimmel performed his duty by holding his recovering son during a monologue while making a political speech about health care. Only a callous ogre would ask why he couldn’t have a website or make public appearances to address this issue, or why he couldn’t get back to being funny like he used to be. Not everyone needs a comedian’s opinion on such an issue to sort things out, especially when he’s employing such an emotion-laden prop.

Welcome to the “post-comedy” era, when just getting laughs is for lightweights. Vulture, dedicated to cultural matters, explains this new concept: “Like post-rock, post-comedy uses the elements of comedy (be it stand-up, sitcom, or film) but without the goal of creating the traditional comedic result—laughter—instead focusing on tone, emotional impact, storytelling, and formal experimentation.”

The way that analogy’s stated is confusing (post-rock uses elements of comedy?), but perhaps the author means that post-rock omits the vocals like post-comedy omits the laughs. So that would mean that post-comedy is to comedy what Sigur Rós is to the Rolling Stones? Generally, I’d prefer that the laughs and the vocals be left in, although I can enjoy a rock instrumental song along the lines of the Allman Brothers’ “Jessica” or a comedian who can critique society’s foibles without getting bellylaughs—Lenny Bruce, for example. Bruce wasn’t really that funny, but what he said was worth listening to, and it was entertaining.

In addition to Bruce, plenty of great, innovative comics over the years have veered from the straight joke-laugh format and explored the story-telling aspects of the form. The problem with enforcing a mandatory anti-Trump agenda on all comedy is that it interferes with the mechanics of comedy, which relies on juxtaposing discordant ideas while skirting the line of offending the audience. Where are the discordant ideas when you’re only allowed one angle and where’s the potential to offend? When you become predictable and slavishly reflect progressive talking points, your comedy falls short of its potential. One of the reasons Dave Chappelle’s perhaps the greatest working comedian is that he refuses to please people as he’s expected to. Put in Freudian terms, Chappelle doesn’t allow his superego to render his comedy toothless—he brings the id in.

Comedian (or ex-comedian?) Hannah Gadsby’s highly-touted Netflix show, Nanette—which hits a number of liberal sweet spots, including growing up as a lesbian in a straight male–driven culture—is held up as an exemplar of the post-comedy form, although some observers see it as more of an extended TED talk than a stand-up comedy special. Far from being laugh-driven, the show’s an extended explanation of why she’s quitting comedy.

Critic Matt Zoller Seitz, writing for Vulture, posits that Gadsby’s post-humor represents the future of comedy, while Bill Maher, who works in what Gadsby calls “an art form designed by men for men,” embodies its past. According to Seitz, Maher’s a relative lightweight who can’t explore the emotional depths of the human condition like Gadsby’s capable of. If you’re looking at comedy primarily as an important vehicle for social change in the progressive direction, then this is an important comedic distinction.

Eighteen days after 9/11, Saturday Night Live featured a subdued cold-open with Lorne Michaels asking New York City mayor Rudy Giuliani, "Can we be funny?" That’s how it feels now. As long as Trump’s in the White House, it’s always going to be too early, in certain circles, to be funny again. Certainly there’s a place for Gadsby’s variety of humor. Innovators like her have always been essential to guaranteeing that the art form doesn’t become stale and self-satisfied, as Bill Maher’s material has become. The problem is when you start telling proven comics that they have to defend their choice of material because it doesn’t advance your own political cause. Norm Macdonald doesn’t live in New York City, and doesn’t have to defend something he doesn’t do to a scolding writer for The New Yorker. Post-comedy’s fine to experiment with, but it’ll never replace a good laugh.