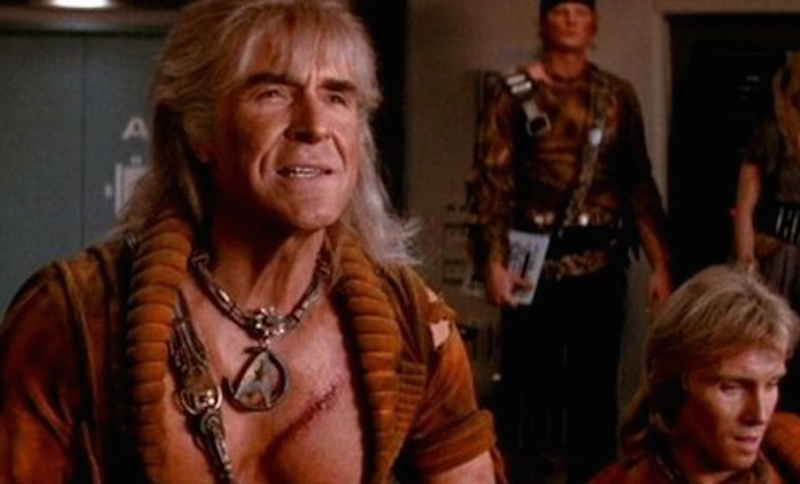 The world has bigger problems than racism, but that’s no reason to shy away from tracing racism’s impact on culture—including on science fiction, where some of the results are pretty amusing.

You probably won’t be seeing a faithful 100-year-anniversary adaptation of the original Buck Rogers novellas anytime soon, for instance (even if complex intellectual property rights issues are ironed out). The novellas were heavily influenced by eugenics theories of the 1920s. The conscious premise, not quite stated explicitly on the 80s TV version, was that a white man from the 20th century gets frozen and wakes up 500 years later to discover the world taken over by Asiatic hordes, led by a conqueror named Kane (clearly an homage to the real Genghis Khan, whose family conquered more of the globe than any other in history).

As the novellas progress, we learn that instinctively anti-individualistic, anti-democratic Asians are partly of extraterrestrial lineage and thus can be killed without serious moral qualms. The last free and democratic city—populated by whites and defended by Buck—is able to destroy the yellow peril once and for all. Hurray!

Weirder, though, in real life it may be that the line of descent runs the other way, with the classic look of alien “grays” influenced by Westerners’ view of East Asians, as first pointed out to me, I swear, by an East Asian friend. I’ve since learned that the century-ago occultist Aleister Crowley was obsessed with the mystical and mysterious Far East when he sketched what some think was the first instance of a “gray” image, claiming it appeared to him in a vision in Greenwich Village during World War I and represented his ideal, mystically-enlightened self.

The racism doesn’t end there, though it becomes a bit less dehumanizing. In the 1930s, the creators of space hero Flash Gordon longed for their own version of Kane, and thus was born Ming the Merciless, evil ruler of Mongo. You wondered why that planet sounded so Chinese, and now you know. You cannot un-know. But face front, true believers, because Kane’s futuristic conquests almost certainly inspired those of Marvel Comics’ 40th-century Avengers foe Kang the Conqueror as well!

Back in the 20th century, according to the original Star Trek TV series, an Asiatic conqueror named Khan took over a third of the Earth, after which, in tellingly Buck Rogers-like fashion, Khan was frozen for centuries, making him a sort of dialectical synthesis of Buck and Kane (and originally played by a Latino to boot). His early conquests, set in the 1990s, were later retconned to take place in the late 21st century, then retconned again in Star Trek novels to be a stealth-conquest, in case you were wondering how you missed it all in the newspapers (I’d now be tempted to reveal he controlled all the jihadists if I were writing this stuff and had to shoehorn Khan into real history).

Khan was retconned yet again in comics taking place in the J.J. Abrams films’ timeline so that in that universe, Khan really did devastate the planet in the 1990s, then get frozen for centuries, then receive plastic surgery from the Federation intelligence agents who unfroze him, making him look like white guy Benedict Cumberbatch so that no one in the future would see that the intelligence services were working with history’s greatest monster.

All this is further proof that the Abrams timeline is a thing unto itself—and indeed, it has just been officially dubbed “the Kelvin timeline” after the starship attacked in the opening of the 2009 Trek film, with the producers promising that the forthcoming new Trek TV series by Bryan Fuller, by contrast, is officially set in the original timeline where Patrick Stewart et al. live/lived/will live. I’m glad that Trek staffer Mike Okuda, at least, keeps track of this stuff. Let’s hope the xenophobic Democrats never put him in an internment camp, the way they did his fellow Japanese-descended Trek veteran, George Takei.

Speaking of the phrase “history’s greatest monster,” the show that helped popularize that phrase, The Simpsons (which used it to refer to Jimmy Carter), has its own “Kang,” one of the two tentacled aliens who periodically menace Earth on the show, the other one being named Kodos—both names taken from conqueror characters from Trek TV episodes, Kang a Klingon and Kodos a human.

It’s as if people are having a hard time taking all this conquerors-from-space stuff seriously after a century or so of it. Don’t they realize the topic of menacing aliens will be discussed by real scholars across the globe this coming Saturday, July 2, on what is officially designated World UFO Day? Well, I’ll leave the real-world implications for another time (and for a piece from me in another venue, as I hope to reveal at a later date). For now, we have our pleasant fictions—warped though they may be by the unpleasant conflicts out there in the real world.