The Final Act of the Holiday Season 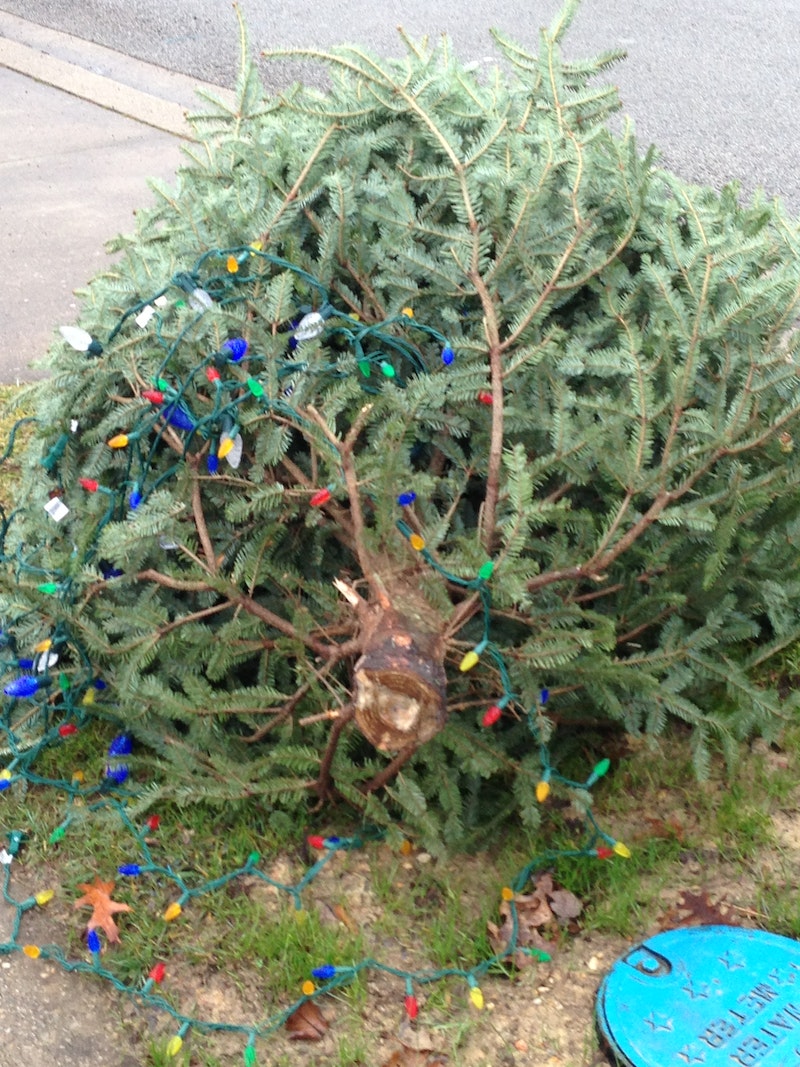 There’s no question that the most onerous task during the holiday season is taking down the Christmas tree. As one who wishes, by some impossible alchemy, that the New Year would begin on Dec. 26, in order to avoid that dreaded dead zone, I admit it’s a bit contradictory that in our household we wait, and wait, to get rid of the temporary but splendid sunroom decoration. But the reason is twofold: it’s a pain in the neck dismantling the darn thing, especially with those prickly pine needles, and, frankly, if I had my druthers, the tree would remain in its spot by the window all year round. Obviously, it has a relatively short shelf life, and besides, my wife would have a conniption.

So, my son Booker and I—we’re the enthusiasts in the family—split the job over two nights last weekend, and now the dead tree’s lying in our front yard, and, with luck, will get picked by the city’s sanitation workers—formerly known as garbage men—sometime this week. By Baltimore standards, where Christmas wreaths are in evidence until March, jettisoning a tree on Jan. 13 is fairly quick, but in all honesty, it’s a big fat example of procrastination on our part.

We started the job last Saturday night, just as the hometown Ravens started overtime against the Broncos in Denver. I’m a one-sport guy—baseball, specifically Red Sox baseball—but I root for the Ravens since it seems to put everyone in the city in a wonderful mood, and besides, I turned on the New England Patriots several years ago when showboat Tom Brady was photographed with his girlfriend or wife (I forget which, don’t keep track of that stuff) wearing a New York Yankees cap. Really, think Eli Manning could survive in NYC if he were snapped by the Boston Herald in a Red Sox hat? Booker, on the other hand, does not like it when the Ravens win, primarily because his school requires “Purple Friday” before a Baltimore playoff game. He’s prickly that way.

The two of us did get a hearty guffaw on the Sunday leg of removing ornaments from the tree when my older son Nicky, touting his enthusiasm over the Ravens’ breathtaking win over the Broncos, said, “Love the Ravens! Who do they play tomorrow?” Apprised that football isn’t at all similar to baseball, my bandwagoneer (bless his big heart) just shrugged, and then segued into a rant—more in his wheelhouse—about what a terrible film Zero Dark Thirty was.

I didn’t agree, and was inclined to like the Kathryn Bigelow production just because the left-wingers are giving her a hard time for depicting torture, but did have to agree that Zero Dark Thirty is more than 30 minutes too long. It’s probably been said already—I haven’t read any reviews—but the movie seemed to take longer than finding and knocking off bin Laden. It was rather uncomfortable in the sold-out theater when yahoos started laughing at the killing of enemy combatants, as if the film was just another ludicrous Tom Cruise thriller or brain-dead Will Ferrell comedy. By contrast, Quentin Tarantino’s Django Unchained, around the same length, flew by, but then that film didn’t have the same quasi-documentary intent as Bigelow’s.

Oh, and not really off-topic: thinking about today’s cultural sensitivity, I was surprised, upon reading Anthony Lane’s review of Django in the Jan. 7 New Yorker, that he’s joined the touchy crowd. Lane writes: “What really grips Tarantino is the chance to bait us, as he has done before, with metronomic mentions of the N-word…” Lane happens to be my favorite film critic, and so was disappointed that he couldn’t have written “nigger” rather than “the N-word,” not because I like the word, but because it’s more honest than resorting to grade-school euphemisms. And Lane’s British! I doubt he’d have any compunction of printing the word “cunt” (more common in the UK than the USA); and The New Yorker, at least in the past couple of decades, isn’t shy about using “motherfucker,” “shit,” “asshole” and the like.

Well, I ramble. In any case, the tree came down, and this year we lost just two ornaments—although favorites that my wife and I purchased in Santiago more than 20 years ago—which wasn’t so bad. I suppose it’s not good form to let you know that Booker and I don’t bother untangling the strings of colorful lights, lousy economy and all. But really, the lights were a bargain at Target and it’s worth the extra bucks each year to just let them rot on the sidewalk with the tree.