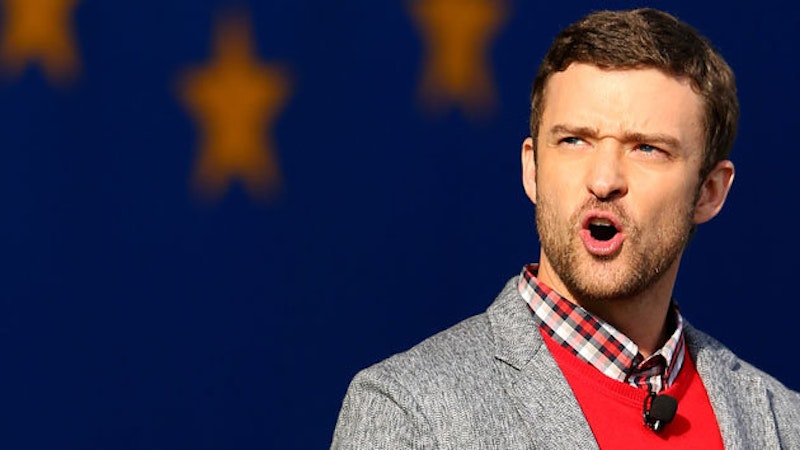 0:42—"You ready, JT?" Timbaland croaks, and a couple of seconds later, Timberlake takes the microphone and we're all giddily imbibing falsetto. But: don't you wish the wait had been a little longer, maybe a little more dramatic? Maybe an overly pregnant pause, or a weird extended interval where Timbaland keeps trying to coax Timberlake into the vocal booth, and Justin lightheartedly retaliates with "hang on, I'll be right in after once I'm done with my McRib" or "but I'm killing this Sudoku round, dog"?

0:48—Have you ever watched Timberlake dance? He's an amazing dancer. Why would anyone, man, woman, or machine, choose to dance with him over just watching the guy throw down on the floor?

2:05—I wonder, does Beyonce feel like maybe her 2013 thunder has been stolen, a little, like she's been upstaged?

2:10—Be serious: you know that I know that Timberlake knows that we know he knows that a "fatty" is a joint, not a woman's posterior. But look, how does one approach a fatty, provided that one isn't part of the law-enforcement community. One smokes a fatty. See what he did there?

2:56—A part of me wishes this had been a tutorial on how to select the right suit as a young, modern professional/ex-Maxim reader. So, you know, I kind of feel shortchanged in that sense, because everybody involved in the creation presumably owns tons of suits and has a lot of knowledge to impart about the best cuts and accessories and how to judge the quality of suits. A missed sartorial opportunity, to be sure. Sucks.

3:20—"All black at the white shows." This is probably the closest Grizzly Bear will ever get to Grammy immortality: a sub-Fabolous throwaway verse.

3:30—Would anybody be upset if 2013 was the year that critically-fellated rappers finally stopped posing unanswerable, rhetorical questions on "event urban pop" singles in attempts to appear "introspective"?

3:49—Hov sounds so bored here. Con: that boredom is contagious. Pro: I stopped being bored the moment he stopped rapping.

4:15—In a really weird way, this reminds me of the Chemical Brothers circa Come With Us: just its joyous, distended lightness of being, of free-floating feathers rising and falling and melting into snowflakes, the promise of candy-coated hooks and chocolate-laced cocaine, like, forever, no pain and no heartbreak and now harsh comedowns and no economic distress and tailored Dolce & Gabbana tuxedos where the seams never, ever split.

4:26—Some interesting devolutions at work in the rhythms at this point, with the glitter bombs and glow-stick swish sabotaged by synth squelches and stutters, implying that this might be one of those instances where re-mixers can only make this more awesome.

4:45—Another way of looking at it: "Suit & Tie" is like the other side of the alcoholic coin Kendrick Lamar flipped with "Swimming Pools (Drank)."

5:15—Did Timberlake actually school anyone on the particulars of love? Do you feel educated? Edutained, even?