The Ever-Shifting Dynamic of Tattoos

Angelina Jolie is just the latest celebrity to sport a heavy dose of ink. 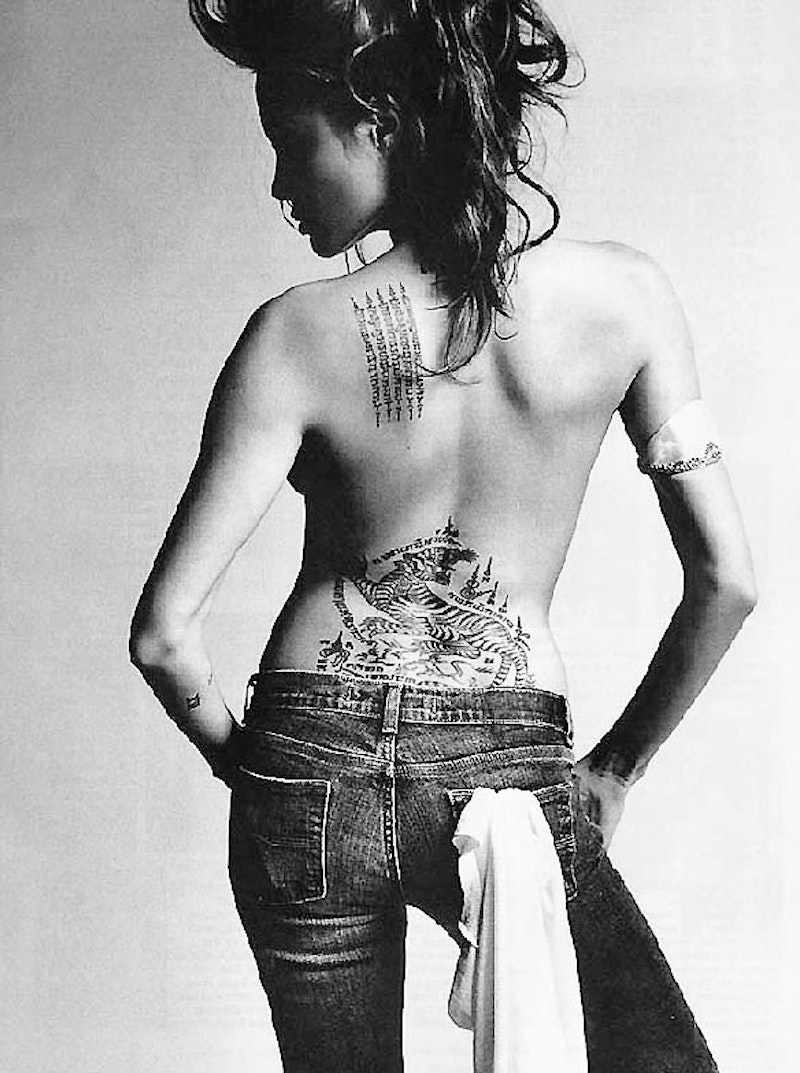 Reports that Angelina Jolie has added another tattoo to her famous physique have celebrity watchers buzzing. A profile photo of the former model, Academy Award winning actress and humanitarian in a recent issue of Vanity Fair shows words tattooed on Jolie’s right inner thigh, but not what they say. Popular conjecture suggests different things, including the words, “Whiskey Bravo,” military code for the letters W and B, the initials of Jolie’s significant other, William Bradley Pitt. Jolie will not reveal what the tattoo actually does say, commenting only that it is, indeed, “for Brad.”

Jolie, obviously, is not the first person to have words, numbers or images inked into her flesh. Oetzi, the Iceman, whose body was found in the Alps in 1991 and who probably lived in Neolithic times somewhere between the fourth and fifth millennium BC, had over 57 tattoos, including ones on his spine, his knee and his ankle. The mummified remains of Amunet, an Egyptian priestess of the goddess Hathor who lived between 2160 BC and 1994 BC, were discovered in 1891 and had dots and dashes tattooed on them in intricate geometric patterns. In ancient times, tattooing spread from Egypt to Crete, Greece, Persia and Arabia, and eventually to China and Japan.

In the West, according to historical records, Germanic and Celtic tribes in northern and central Europe prior to the Christian era were often heavily tattooed. The Norse and Danes, for example, tattooed their family crests on their bodies. In Britain, early ethnic groups like the Picts were known for their blue tribal tattoos. But tattooing died out in Britain after the Conquest in 1066 because the Norman invaders disliked the practice.  Sometime after the 12th century, tattooing disappeared completely from western culture.

Tattooing was re-introduced to the West during the Age of Exploration when Captain Cook came into contact with the Polynesians. After returning from one of his voyages in 1769, Cook brought to London a heavily tattooed Polynesian named Omai, who became a sensation among the upper classes. Tattooing became the latest fad, and for a time, many had small tattoos placed in discrete locations.

Ultimately, however, the upper classes turned away from tattooing, and by the 20th century, it increasingly became socially unacceptable. By this time in the United States, tattoo artists had to practice their craft covertly, out of the public eye. Individuals known to have tattoos were either circus performers, working in “freak shows,” Naval men, who used tattoos for identification purposes, or perceived social deviants, like “bikers” or “juvenile delinquents.”

By the late 1960s, public opinion about tattoos once again began to turn positive, due in large part to the handsome, charismatic tattoo artist, Lyle Tuttle, who set up his first shop in 1949. A seminal moment for the art came when Tuttle tattooed a Florentine bracelet in black ink on rock star Janis Joplin’s wrist. Joplin’s tattoo helped to bring the art into the mainstream, and women began to have tattoos placed on them as a signal of feminine empowerment. Tuttle himself credited the increasing number of women who received tattoos to the women’s liberation movement.

Today, there are many reasons why people choose to get tattoos. Certain cultures such as the Maori in New Zealand see tattoos as signs of status and rank. Others see them as symbols of religious or spiritual devotion, marks of courage, or signs of love. Sailors, prison officials and criminal gangs have used tattoos as identification or a mark of belonging to a particular group. Some receive tattoos for protection against evil forces, while others have them done purely for cosmetic purposes.

Studies have shown that tattooing is a form of self-expression, a means of defining personality, demonstrating rebellion, and expressing devotion to or done in memory of a loved one. Women who receive tattoos often do so to make themselves feel attractive, unique, or special. College student have found tattoos are a great means of expressing oneself. Many also believe that tattoos improve or enhance their physical appearance.

Angelina Jolie’s reasons for getting tattoos are her own; at last count, the actress has around 15 tattoos on various parts of her body. For the American public, having a celebrity of Jolie’s status and influence sporting them demonstrates tattoos are a socially acceptable means of expressing oneself.