Hey! You're Not Done Here, There Is Always More.

An interview with Rio Babe International. 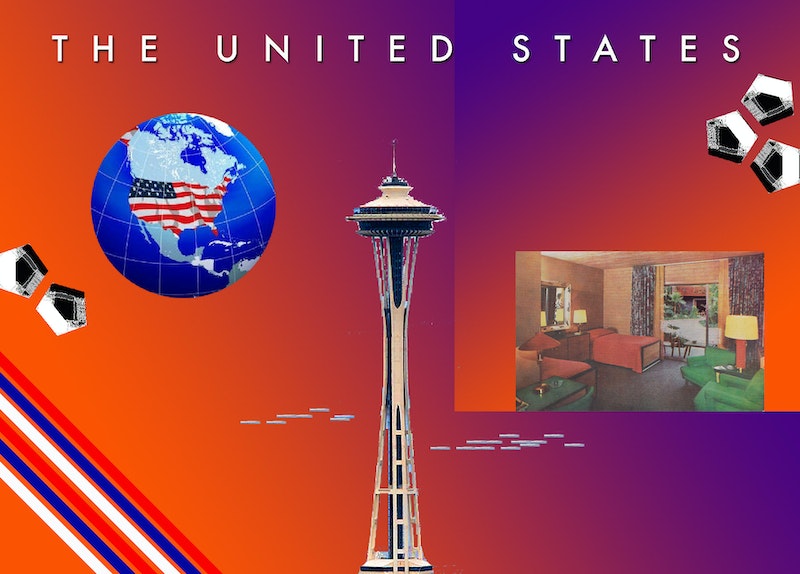 I’ve been struggling for the past week to find a way to introduce the following q&a I did with Sam Strand of Rio Babe International (a new media/fine art/aesthetic/fashion-driven/all-things-Internet collective) and a fantastic visual artist I know from my by-gone days at the University of Michigan.

It’s not that there isn’t much to say—there are too many thoughts brewing in my Internet-addled brain, too many parallels and violent tangents, as the obtuse above paragraph is meant to convey with good intentions.

Based in Oakland, Rio Babe is a bit of a hydra; they’re interested in advertising, DJs, the World Cup, “contemporary cultural phenomena,” graphic design, painting, and so on. Their work is deeply into in now-mundane, everyday assault of advertising. (“Everything is presented by something else that is presented by something else.”) They sell an aesthetic, and they do so by any means necessary. Currently they’re set up at the Hatch Gallery in Oakland, finishing up a show that was anchored on the glorious spectacle surrounding the World Cup.

Rio Babe is a note in the mystic chords of the Internet; in the words of a friend, “I’m picking up what you’re laying down.”

Splice Today: Your website, riobabeinternational.com, is a wonderful mix of media; the "about" page tells me that your goal is to "find a place where visual and social elements can mesh and exist together with minimal offense and maximum exposure." I dig that on a gut level, but am not entirely sure what it means. Can you talk about that vision as it relates to your current set-up at Hatch Gallery?

Rio Babe International: We have so many delicious images in front of our faces nowadays. Our immediate world is surrounded by flash & jazz & pictures that get us purely based on immediate satisfaction. Advertising is really stupid, and severely genius at the same time. We like to get into that. Promotions and the psychology behind why people love to look at certain things is really important to us—no matter how calculated, no matter who is behind it, no matter what is being sold. We study these things, and then try to make something that explores the connection people have to these glossy images, and then mix it with some things that we find to be important, things that we want to look into. We want to get points across without pissing people off, we want people to be almost satisfied with a little bit of uncertainty, and then ask for more. Always ask for more. Never be satisfied. That is important.

We dig the world and how it is. Billboards, bus ads, commercials, corporations, people representing people. We really appreciate all of these things, and the systems that have been created around them. We know that they're terrifying and much too manipulative sometimes, but we know we can get a lot out of how they work, and how/why they were created in the first place.

The World Cup is fucking flowing with these ideas. Everything is presented by something else that is presented by something else. Adidas, Puma, Nike make the uniforms. Coca Cola makes brilliant commercials that work in culture and product and people and place. The World Cup is about tourism, capitalism, competition, but it's just as much about unity and common space, respect, acknowledgment. The World Cup is fucking genius. It is emotional, global, realistic, current, honest, vain and idealistic. So rich.

We decided to make a sort of local "fan fest" that illuminated these points. The installation at Hatch is a balance between a rad spot to watch The World Cup (convene with locals, meet new folks, relax in a hot tub, drink beers/wines), an exhibit that showcases fine art, a celebrity/world cup current event "newsstand" and a brand new space where bits of all cultures can collide to make something sparkling. We want to touch on all of these feelings that the World Cup naturally presents, and throw it into a new context.

We know our designs are vapid at first glance. Seemingly surface. We try to get into that glitz, but include something that says Hey! You're Not Done Here, There Is Always More. More of the same, more meaning, more connection, more story, better story, better art, better ideas. We want our images to be gateway images. We want people to be into celebrities, pop culture, contemporary cultural phenomena, and use us to become interested.

Maximum exposure for us just goes along with our love of advertising technique and promotional ideas. Maximum exposure is our challenge, it makes us work hard, but its mostly mimicry of what already goes on. We want to follow some sort of formula, and then mix it and craft it up down the road. Promotion is important for our "brand," personally, but I think we mostly like to focus on promotion as an art form. We dig people more than anything. And we want to work for people, especially if you have a Real Talent, or we're impressed by a supreme skill of yours. We want to share our love for certain talents, and showcase them to the world. Take our BOYSCOUT line, for example. Its roots are in tradition. The Boy Scouts were one of the first organizations in South Africa to go against apartheid law and allow multiracial gatherings. We take this sincere idea, and bring it to here and now. We add in glam, promotion and pop. We promote HOTTUB and Los Rakas—two Oakland bands that we have severe love, admiration and respect for, and just so happen to think that they have Boy Scout qualities. In the same line, next to them, we promote famous football players, Pieter Hugo and Jay-Z. Jay obviously doesn't need our help, but we promote him in the BOYSCOUT line because he does solid. He gets things done. And putting him next to Los Rakas and HOTTUB is giving reference, a possible credibility to the rookies. We work to place everyone on the same level, and we use celebrity for common ground, and then work from there.

ST: Without trying to pigeonhole you, the vibe I get from Rio Babe is something along the lines of, "You and Kirby are selling a sort of raw aesthetic—a type of essence that binds to visual and pop culture, mass media and grassroots advertising." Is that why your work/art takes the form of posters and business cards, installations and viewing parties? Without meaning to be glib, what's your business plan?

RBI: Rio Babe is a brand constructed by two people. A brand for fashion, for events, souvenirs, social installations, fine art, design and promotion. We use posters, the Internet, handmade design (sign painting, drawing), digital design, clothing and fabric design, video, and photography. We don't really know any other way to do it. How can you have a tank top without a drawing, a video and a party to back it up? We do everything because we can't stop. To get a point across, it is necessary to follow up with different mediums, different presentations, to form a COMPLETE PACKAGE. We want to try to take care of people, to cater to a lot of senses.

Ninety percent of the time we're anxious because there are only two of us. We want to be big. We want a whole team that works on promotion for us. We want a team of designers, of sewers. And someday we’ll figure out how to manage something like that, but for now it's the two of us. We have a very specific idea about what we are creating, how it is affecting people, and we make constant calculations of how people may respond to what we make. If we want to get bigger or expand, we have to make sure this stays in effect. As of now, we have no idea how to do that, so we end up working a shit ton, and making no profit. But it's worth it for now. Definitely.

ST:  In exploring your website and its various corners of wonderful art, I sorta made an association between the aim of your work and the likes of MIA, Jeff Koons and Damien Hirsch—not in terms of "your work-vibe-aesthetic is influenced by them," but in terms of a sort of all-over approach to art, refusing to limit it to canvases and pedestals. What kind of art and artists, past and present, do you admire most?

RBI: We can't talk about Jeff Koons and Damien Hirsch or any other proclaimed artist because it's too boring. MIA is a different story though. She is interesting. She is a brand, she's making a brand. She is a musician, a designer, a businesswoman, a global thing. She's bringing people up with her. She is using mega promotional tools, the power of the Internet, the power of "hip," and vomiting over everything. She is very now, she is very aware, she is very motivated, she is very geared toward the interest of this generation. She is creating a standard that asks people to be thorough. She is requesting that people get good at all things, requesting that we see music, art, culture, the Internet, people, performance, clothing all as the same thing. She asks a lot, and we respect that. We don't want to ask as much as her, though. We want our grandmas to understand what we do. We want there to be an obvious connection between old world and new world. MIA gets angry. She is pissed about some things—which is necessary. That kind of passion is key in some cases. But we don't want to be angry. We don't want to place blame. Total admiration for that babe, though.  She is setting a new standard.