Taking Gimmickry Out Of Art

Or putting more in. I'm not sure which. 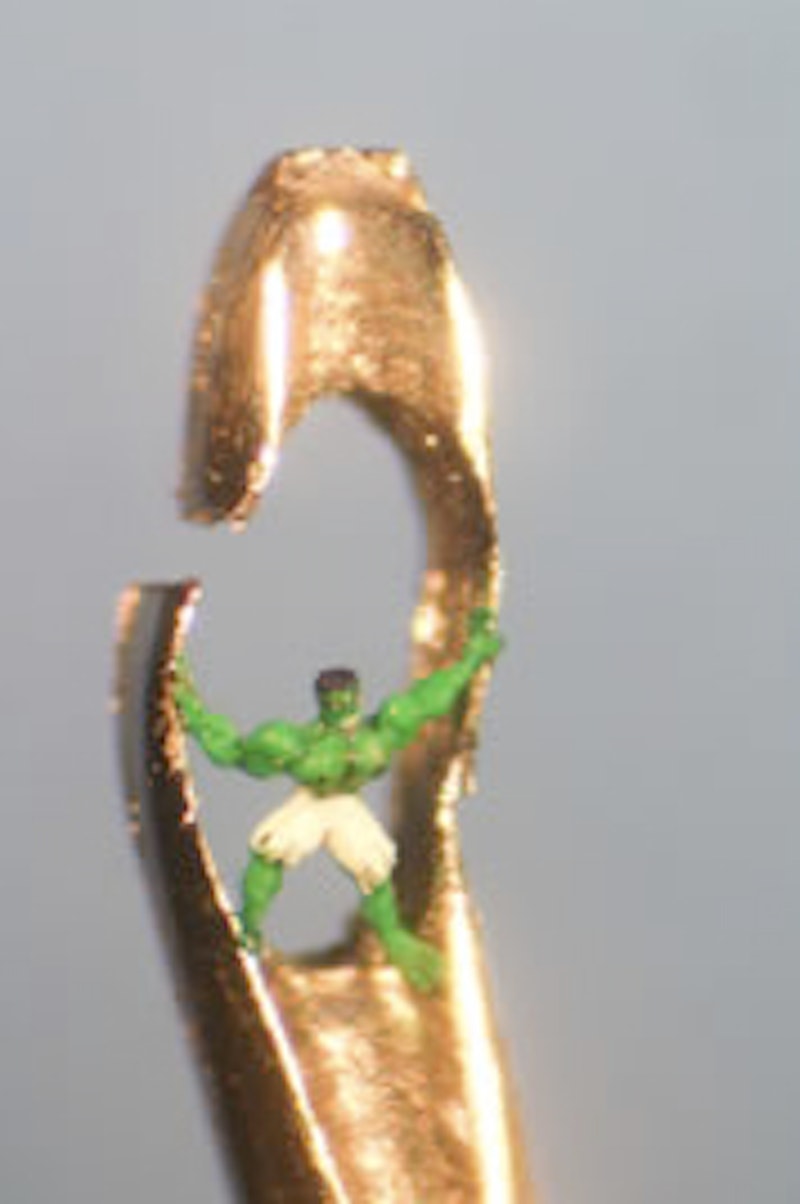 Just as much as I feel that it’s possible to fall in love with someone because of their artwork, I believe that I can deeply hate someone because of the things that they create. There are few more disappointing experiences in this life than meeting an artist who describes themselves as dedicated, or passionate, or at the very worst, “unique,” and forcing yourself through a series of belabored compliments upon seeing their awkward anime re-colors, watercolors of their dog, or a desperately sad failure at something abstract. There’s a difference between Jackson Pollock reacting against figurative painting and you being a lazy asshole, asshole.

During college, I made the acquaintance of a fat, redheaded kid who smelled horrible, but had an incomparably bright disposition. I also befriended his roommate, a lanky guy who was the spitting image of The Re-Animator. They didn’t get along, mostly because Redhead had left a pig heart stuffed with cigarette butts in his bottom dresser drawer over a very hot holiday weekend, but these things are fairly commonplace when you go to a school with a lauded arts program and a low price of admission.

I ran into Redhead at a gallery opening somewhere in historic Ulster County, NY and lamented my displeasure with much of the student art that had made it onto the walls—not as if I was going to debase myself to please the gallery scene anyhow. I was still in a creative phase where I didn’t “get it.” I saw art and it was either nice or not nice, but I’d not yet been willing to plumb whatever intellect stood behind it, because thinking too much about other peoples’ art was for arrogant jerks who couldn’t do any art for themselves. As we stood in front of a big canvas full of short, penciled lines that combined to cascade and spin towards different focal points, I confessed my ignorance. I didn’t know why this work existed, what gave it value, and why someone would have made it.

This is when Redhead said something immensely more valuable than anything that five years at art school had ever taught me.

“Art is just an idea, and it’s an idea that someone takes and pushes until it can’t go any further.”

Of course, the point at which a work is “complete” is still left entirely up to the artist, who will almost invariably fuck it up anyhow, but the thought that good art was a singular idea pursued wholly and completely until it was finished is one that has always guided me.

So, I feel conflicted when I see something like David Ottogalli’s cheap Peep pop art, which might have some kind of appeal if it wasn’t so obvious, or expressed some form of deep psychosis. At its core, it’s the process of using a limited palette to create something, and I definitely don’t take issue with Legos being used this way, so this feeling of revulsion comes with a lot of cognitive dissonance. I feel the same when I see Willard Wigan’s microscopic sculptures, which aren’t beautiful or accurate as much as they are a bit clever, and demonstrate a supreme amount of poise and patience. Both of these are prime examples of one idea beaten into its ultimate submission, and the artists who have managed to capitalize on this premise.

I can’t deny that there’s a certain degree of jealousy involved, but will Wigan or Ottogalli ever be able to expand their repertoires beyond what they’re known for and bring their audiences with them? I’ve taken the David Bowie approach to art and slipped into a new aesthetic anytime a new project called for one, but it’s no way to create the momentum necessary for any kind of fame—so do you need to earn your creative freedom by embracing a cliché and then hoping that it doesn’t overtake you?
Wisdom once again comes from someone much smarter than myself. My friend Beckie was able to summarize this whole mass of creative success and failure better than I ever could:

There’s no equation to solve art or love, so you might as well have a good time while you’re figuring them out.