The Dancing Man is Winning 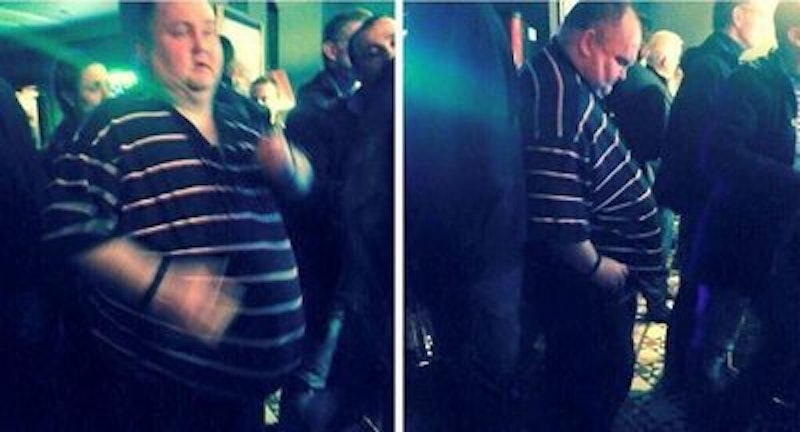 If you're feeling positive about the human race, it's a nice thing. Go with those good vibrations and ride that wave as far as it will take you. But don’t go on the Internet if you wish to maintain your sanguine outlook on the world. Steer clear of this enormous repository of human negativity, just as I’d advise an avowed celibate to avoid the Playboy mansion. The Internet is the playground of the bully. It's the house of fun for every sniveling little sociopath who wants to act out in a way that would get his scrawny ass physically pounded in the real world, where there are actual consequences. Anonymity to this sort of creep is like spinach to Popeye. They can almost feel their muscles start to bulge when they brush the Cheetos crumbs off their keyboard and get ready to type under a screen name.

One characteristic of the Internet sociopath is the glee they take in beholding the pain of others—often people they don't even have any particular animosity towards. Sociopaths lack the quality of empathy, which means they’re unable to understand another person's pain. In other words, they don't have a social conscience. If you have the stomach for it, go to Gawker and read the comments section of a story involving, for example, someone who may have been in a bad accident. If there’s any perceived comic element to the story, you'll be sure to see people who think this is positively hilarious, regardless of the pain the victim suffered. Their joy as they type their "witticisms" to impress their fellow freaks is palpable. These people are sociopaths.

Internet bullying is so rampant that it's impossible to put a daily number on it, but every so often there's a story where the behavior was so egregious—or the person involved is high profile enough—that word gets around. Last week one incident involved former Boston Red Sox pitcher Curt Schilling, who proudly posted on Twitter that his daughter had been admitted to the college of her choice. The trolls came out in force, spewing vitriol against the young girl and even threatening her with rape. But Schilling still has his fastball. The veteran hurler pursued the worst offenders and even got one fired. The troll worked selling tickets for, not surprisingly, the Yankees.

Just when I’m about to fall into total despair, along comes the feel-good tale of the year. I refer to the "Dancing Man" story that's become an Internet sensation. The dancer in question is a gentleman struggling with a weight problem who was nevertheless enjoying himself listening to a live music show a few weeks back. Dancing Man was dancing alone to the music, a solo pleasure to which we’re all entitled. It was Dancing Man's bad luck, however, to be in the vicinity of an empathy-deficient dweeb. This guy took a picture of Dancing Man happily getting his groove on, laughed at him for apparently having the audacity to enjoy himself in public while being overweight, and then took a picture of the shamed Dancing Man. He thought it’d be a great idea to share the misery of a man who had momentarily forgotten some of the challenges he faces, so he anonymously posted the photos on the 4chan bulletin board website with the following narrative: "Spotted this specimen trying to dance the other week. He stopped when he saw us laughing."

The before-and-after photos of Dancing Man will absolutely tear your heart apart. In the first one he's dancing obliviously, losing himself in a way that dancing allows you to do. In the second, he's standing still, hanging his head in embarrassment. He has no idea that his tormentor was not about to stop there, that his fun wouldn't be complete until he posted it on the Internet for everyone else to laugh at. The Dancing Man also has no clue to how his plight will eventually play out, as that would be beyond anyone's imagination.

The story so far sounds like a standard Internet bullying scenario, but it takes a real nice twist here. The camera-wielding goon probably thought the rest of the world shared his sick sensibility, but his post didn't sit well on the Internet. People didn't care for the casual cruelty. An L.A. woman named Cassandra Fairbanks started a Twitter hashtag campaign to find Dancing Man and it worked within 12 hours. It turns out Dancing Man is a resident of London named Sean, and things are looking up for him after his dance fail. Hundreds of women (1727 at last count, and by all accounts very attractive)—Fairbanks' fellow members of the Coconut Oil Friendship Club—are now in the process of organizing a massive dance party for the portly Londoner. Pharrell has expressed an interest in attending, and Moby has volunteered to DJ. The L.A. Memorial Coliseum has offered its space for free. Over $22,000 has already been raised to pay for Dancing Man's party trip to L.A. It is looking like one great time is shaping up for the big fella. Sean has posted a photo of himself with a personal trainer on his new Twitter account, so it appears he's getting in shape for his big night.

So, sometimes there are happy endings to the depredations that some unlucky people are made to suffer in life, and on the Internet. I think I'm looking forward to this dance party almost as much as Sean. Rocking out with 1727 women, now that’s pretty fantastic. And let's not forget about the perpetrator of this whole scheme. The weasel will eventually be outed—I suspect Anonymous will be involved—and he must be punished. I suggest the little shit be strapped into a chair with his eyes pried wide open—like Alex in A Clockwork Orange—and made to watch a video of Dancing Man showcasing his best dance moves in the Coliseum with all those beautiful women.