The Scene of a Space After an Action 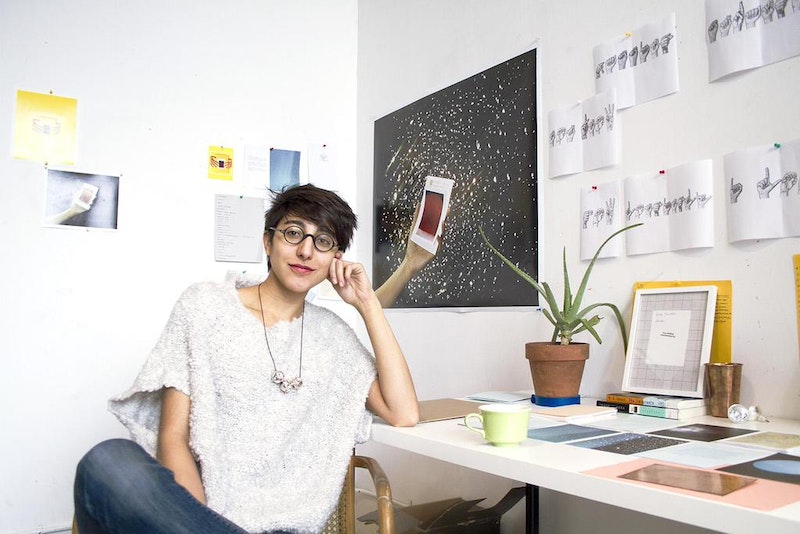 SPLICE TODAY: Hello Magali, how are you doing today?

MAGALI DUZANT: I am doing well, a bit winter-fatigued but not too bad. Spring is on the horizon, I hope.

ST: I last saw you in San Francisco. What brought you to the five boroughs?

MD: Well, I grew up in Queens, went to school in Pittsburgh, traveled for a while and ended up in San Francisco for a few years doing a residency. I moved back here for graduate school.

ST: The thing that really knocks me out about the West Coast is the quality of light out there. Is that something you have noticed as being markedly different between SF and NYC?

MD: Definitely. Nothing is quite like the light in California. It has such a specific temperature and feel, almost perpetually golden. In San Francisco, there is such a great mix between light filtered by fog and warm, beautiful, rich golden light. It always seems to set a mood, it feels cinematic—both 1970s heat and 1930s film noir rolled into one. I think the quality of light or the experience of light really started to play into my work in many ways.

ST: As someone who does not shoot in a studio, I feel that most of the great architectural spaces worth photographing are always impossible to shoot in a pure way. That is, people are constantly invading the frame. Thoughts?

MD: I would agree, but at the same time spaces are made to be inhabited. I've never found myself drawn to architectural photography for perhaps that exact reason. I want to see spaces lived in or interacted with, which doesn't necessarily mean someone has to be there, but their presence.

ST: In your past work I've noticed a consideration of physical space. The essence of photography is based on looking, but in your settings I get a strong sense of narration as well, as if I am looking at a very specific point in that narrative where another character has just exited the frame. Is there any truth to that sentiment?

MD: Yes, when I was focusing more on still photography, I was very much interested in landscape as the scene of a space after an action. I was trying to treat the images as a clue or a hint at something that had occurred, imbued with the resonance of an event but not necessarily the event. California had that effect on me but I think my personality did as well. I'm somewhat of an interior person and at times I mull things over perhaps a bit too much. I like to take account of my surroundings and go through inner dialogues.

ST: Is your approach to making work spontaneous, or is it project and rule oriented? I find that, for myself, I have to throw myself out in the world at random times, if even to derive three shutter clicks over three hours. Sometimes a theme emerges and sometimes it doesn’t.

MD: It ping-pongs back and forth. It is definitely project specific. The Live Streaming Sunset piece has had so much thought put into it and there will be so much more. It came out of a personal experience and started to form with each outing. Sympathetic Magic, in which I had my aura photographed every two weeks over the course of a year, began spontaneously on a whim and quickly formed into a series of rule-based practices. Throughout my work I have a few projects going on at once. Live Stream Sunset is at a point where I am definitely “project managing and expanding” so I am also working on some small, quick book projects and testing out naturally toning and exposing images that balance out a more physical making with something more on the lines of overseeing.

ST: Can you tell me about the Live Streaming Sunset project? What are its origins? Will the project expand or is this a limited engagement?

MD: Live Streaming Sunset is a large-scale public art piece I have been working on for a while now. It is a live streaming sunset tracked from multiple time zones, replacing itself from zone to zone, in essence creating a sun seen in the perpetual act of setting, but never fully going down, never disappearing from the sky. It began as a single streamed sunset filmed and projected live from California to NYC for the 2013 Dumbo Arts Festival. I began to build on it and increase the number of locations so it became a continual, tracked sunset. It grew out of missing California and a certain type of relationship with nature within the city which NY doesn't have, but for me San Francisco definitely did.

Each round of the project takes on a slightly new shape. The latest round, staged at the Fridman Gallery in NYC, ran from Iceland to California with stops in Costa Rica, NYC and Colorado to form a 10-hour setting sun. The piece will run in an expanded form at the end of the year through the generous support of the Queens Council on the Arts, with streams across Asia being projected back to NY in real time. The ultimate goal is for a full 24-hour sunset live streamed from 24 time zones.

ST: Are there projects brewing for the near future? Dream projects in the distant future?

MD: Live Streaming Sunset is a bit all encompassing this year as I plan for a larger run, but I've been tinkering on other things. I am working on a few book projects, two are text-based, one a collection of views of the moon from a diverse range of collaborators and the other is a collection of email spam. I am beginning a studio residency in April and am going to really push this idea of using projectors as exposure units of large wall-sized prints. For the distant future, honestly it's getting live stream sunset up and running in it's full capacity. It's a full-on project and it is going to take some time to get all the pieces together, but it's been off to a good start.

—Check out more of Magali Duzant's work at her official website.