It was a time when Americans still dressed up for weddings and church services. Clues are below. 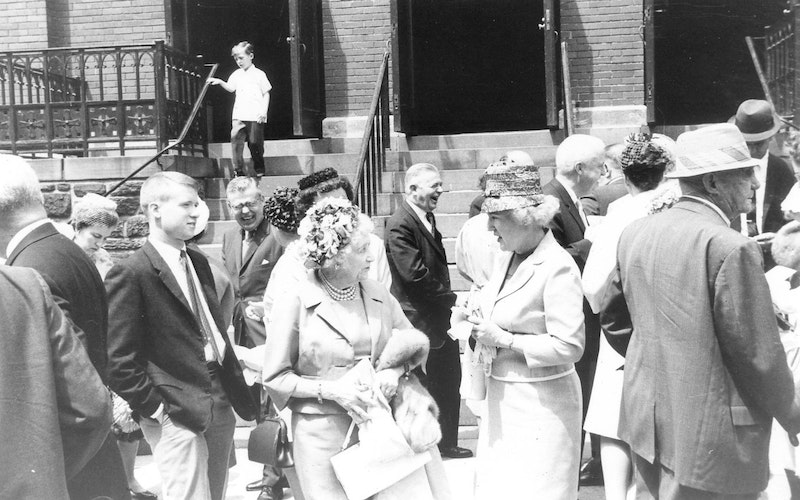 This week’s entry initially stymied me (still does, honestly). Once again plucked from a box of photos inherited when my mom died in 1983, there’s zero description—except the year—of this complex snapshot of what appears to be the aftermath of a wedding. My 17-year-old brother Jeff, with the crewcut and sloppy tie, is gently staring at our mother (in the mile-high hat), who’s convivially gabbing away with the lady in the middle. Jeff probably wished he had a transistor so he could listen to the Yankees game on this spring day. Over the weekend, in consultation with my brother Gary, the Hercule Poirot of Bermuda, we tried to solve the puzzle.

I questioned the idea that the assembled were outside a church (I’d guess in Nassau County, not far from Manhattan) noting that the young fellow at the top didn’t look like he was leaving an exchange of vows. Gary correctly said, “The kid isn’t wearing a tie, but he’s definitely dressed up. Those trousers with the crease and the crisp white shirt are not play clothes.”

Aside from my two relatives, I recognized no one else in the photo, a jolly bunch from the looks of it, which made me wonder where my dad was. Gary and I tossed this around, and figured it was a Saturday afternoon and our father was working at his car wash, and Jeff—always a good sport—drew the short straw, enlisted as Mom’s chaperone. So who was the photographer? A mystery lost to time, but it’s likely Mom brought one of the family cameras and enlisted the services of someone—probably a stranger, she wasn’t shy—to capture a candid (maybe) moment of Jeff, the second-oldest of five sons, and her. It’s doubtful that anyone captured here is still alive—hard to tell about the kid, who might’ve been knocked off in Vietnam, sitting inside a jail cell or, more pleasantly, healthy, wealthy, retired and living lavishly in Florida to escape taxes—but there’s no denying it’s a typical setting from a long-ago United States.

Clues: Port Huron statement was completed; the first Walmart opens in Rogers, Arkansas; heavyweight boxer Sonny Liston knocks out Floyd Patterson in the first round at Chicago’s Comiskey Park; Flea of the Red Hot Chili Peppers is born; Johnny Carson takes over as permanent host of The Tonight Show; John Ford makes his last classic, Godard makes his first; The Beatles finish their fifth and final residency in Hamburg; a 114-day daily newspaper strike takes place in New York City; Michael Curtiz, director of hundreds of films including Casablanca, dies; Helen Gurley Brown’s Sex and the Single Girl is published; and Lawrence of Arabia is the top-grossing film.