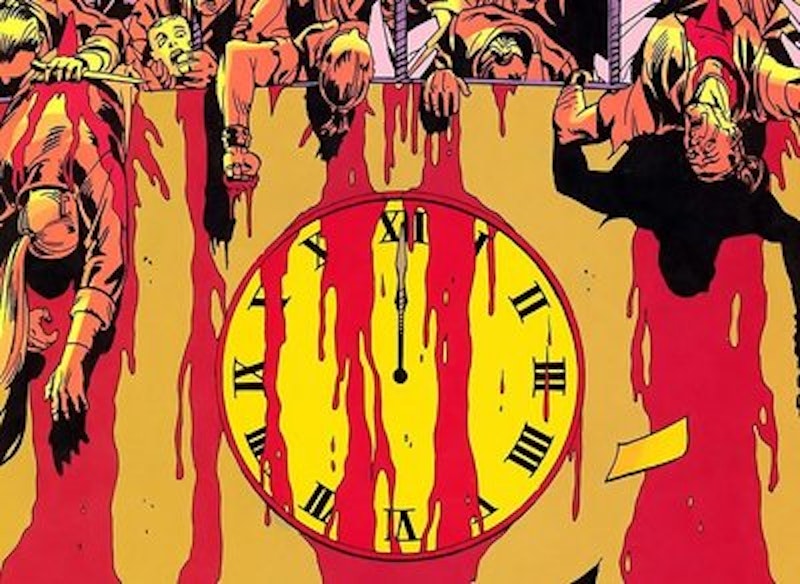 Justice League is a movie about doing the impossible: teaching an inattentive public to differentiate between the DC Comics brand and the Marvel Comics brand—by making people hate the former.

At least the print versions of DC Comics are still going strong: A new Watchmen comic called Doomsday Clock is set just a few days after Superman died—and hits shelves just a few days after he died at the box office. I hope the DC movies prove as responsive to market warning signals as the comics themselves usually are.

Indeed, media changes so quickly these days, and the world is becoming so transparent, that you can watch as all the real-world scandals and crises (both corporate and political) cause huge changes in your favorite fictional universes, right before your eyes.

For starters, thanks to Hillary Clinton, I don’t think I’ll ever see DC Comics’ Earth-2 (a duplicate world imperiled by Nazis, the evil god Darkseid, and a sinister version of the Flash in various versions of DC stories) in quite the same way. Coaxed by Now This News, she recently fantasized about being "on Earth-2, where I am [president].” Those pro-Trump trolls who said we entered an alternate timeline when the election arrived may be right after all.

Even if you’re not a former presidential candidate, these days it’s hard to talk comics for long without veering into some political squabble. The only thing I’ve seen in the past few days harder to watch than Justice League was a video of Ezra Miller bouncing around squealing and giggling after successfully getting his weary-sounding fellow cast member Gal Gadot to condemn “misogynists” in-character. Let’s not work that moment into the Flash movie script.

Let Gadot and Wonder Woman director Patty Jenkins do as they please, though. Remember, they made more money than Justice League on 1/6 the production budget, which should mean something even to the dolts in Hollywood. (Might it also be the script, people?) And why is Chris Terrio, who wrote both the lame Batman v Superman and the lame Justice League, now tapped to write Star Wars IX? Maybe there is no justice.

I’ll say this for DC’s Justice League movie, though: It provided an inadvertent supplement to the Thor: Ragnarok movie that Marvel released a month earlier. No one planned this—and I’m not sure anyone but me has thought of it—but comics writer/artist Jack Kirby’s original plan, in print back in the late-1960s, was to depict Ragnarok, the Norse death of the gods, befalling Asgard, and then follow that with “New Gods” comics in which beings like Steppenwolf (the villain in the Justice League movie) replaced old gods such as Thor.

Marvel didn’t go for it then, so Kirby went over and did his New Gods comics at DC, basically skipping the Ragnarok part. Now, nearly 50 years later in theaters, the New Gods finally appear right on the heels of Ragnarok! Of course, this Ragnarok movie was awesome whereas this New Gods movie was bad, but it’s still nice Kirby’s vision was belatedly, accidentally, sort of fulfilled.

(Justice League was otherwise so un-Kirby-like that it didn’t even dawn on me the energy tunnels Steppenwolf traveled through were supposed to be teleportational “boom tubes” like in the comics. More like snooze tubes, right?)

When superhero film- and comics-makers pay close enough attention to their jobs to coordinate things like a Ragnarok/New Gods sequence of events intentionally, I’m even willing to forgive them for paying surprisingly little attention to the real world.

I notice, for instance, that the aforementioned Doomsday Clock, set circa 1990, features a cameo by a political commentator who identifies himself in a speech balloon as William F. Buckley Jr. but who looks nothing like Buckley. There are multiple possible harmless explanations for this, but I wouldn’t be shocked to learn that the writer, DC Comics head honcho Geoff Johns, knows Buckley was a real person but that the artist and editor do not. Since Buckley plagiarized my column about Howard Stern back in the 1990s, though, I probably shouldn’t mind if he’s now being forgotten—or as they say in comics, removed from continuity.

I tried inviting another real-life political villain, then-New York councilman Dan Halloran, to join a group I assembled to see the first Thor movie back in 2011, thinking that since Halloran claimed to be a neo-pagan who worshipped Odin, he might be interested. He didn’t respond and within a couple years wasn’t going on any movie outings because he was in prison for soliciting bribes—not a surprise to some libertarians, who suspected he wasn’t quite one of us, nor to the more hippie-like of his fellow neo-pagans, one of whom warned me that the Odin-worshippers like Halloran tend to be white supremacists.

We need things like the superhero films to teach rising generations there are better ways than sadism and villainy. And until we have all the real world’s ethical and political dilemmas worked out, these films allow me to obsess over simpler puzzles, such as predicting where the sixth magical Infinity Stone is located before they are all gathered together and wielded by the villain Thanos in next year’s climactic Marvel movie, Infinity War.

The Stones’ secret locations had been slowly spelling out the acronym THANOS, with only the H still missing—yet in last month’s Thor movie it doesn’t seem to have been in the Hammer of Thor, the goddess Hela, nor the god Heimdall (and probably not in the Hurt-Staff that Jeff Goldblum had). So I’m going to guess it’ll be in the Heart-Shaped Herb (or maybe the heart of the vibranium meteor-mineral deposits) of the kingdom of Wakanda in February’s Black Panther.

That will probably bring me more satisfaction than anything likely to happen in a political or corporate office these days.