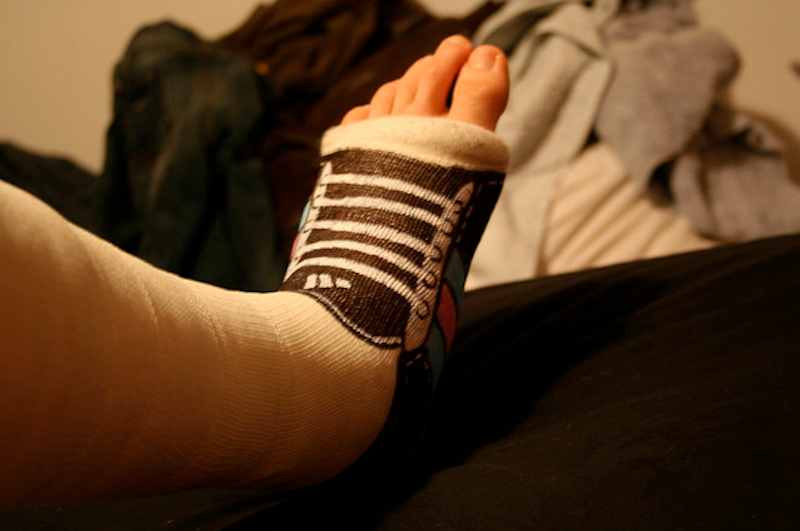 I tore my Achilles tendon three weeks ago playing flag football. I wish I had a cooler story than that. Every time someone asks me how I injured my leg I'm tempted to embellish; chasing a purse-snatcher, rescuing a child from a burning building or struck by an errant tire while working on a pit crew. Any of those would be infinitely more interesting than an injury suffered during a stupid flag football game. On the team of old guys I had to be the old guy who required surgery.

The initial pain of the injury gave way to disbelief when the surgeon told me that I'd be in a cast for eight-10 weeks, and couldn't put any weight on the repaired leg for just as long. Painkillers did a nice job following surgery but they didn't make me feel any better about sitting on the sofa all day while my wife took on the responsibilities of two parents. When my six-year-old son asked if I could help him learn to ride his bike without training wheels I had to tell him, "No buddy. Daddy's hurt, remember?" He was disappointed. Superman had officially lost his cape.

My one-man pity party was interrupted last week as I walked my son home from school. Okay, he was walking; I was rolling along on my knee scooter. A neighbor, whom I’d never spoken to before, "How long do you have to be on that thing?" I gave him the lowdown on my injury and prognosis. He told me that he had the same surgery in June. While I was encouraged to see him walking, my heart sank a bit when I realized he was still in an air cast. Apparently he was injured playing basketball; then continued to play on it for two months before seeking medical assistance. While it was nice to have a brother in Achilles to share rehab stories it was even better to hear someone with a dumber injury story than my own.

My family went to a nearby orchard last Sunday to buy some apples and pick pumpkins. I hobbled along on my crutches; ambling from bench to bench. As I sat watching my kids play I heard someone ask, "How'd you hurt your foot?" Ah, here we go again. I was expecting another person to suggest that I was too old for physical activity should take up something less strenuous like fishing, whittling or thumb wrestling. Nope. I’d found another guy with a surgically repaired Achilles. He tore his Achilles tendon after playing basketball in flip-flops for over an hour. I enjoyed our chat, his encouragement, and the fact that his injury story was definitely dumber than mine.

I felt like an idiot after suffering such a significant and painful injury playing something as innocuous as flag football. What the hell was I doing? I have a family to take care of. Maybe it really was time to be done with such youthful pursuits. But I was just being a guy, doing guy stuff. It could’ve happened to anyone.