Still Kids After All These Years

The Kids In The Hall bring the laughs live in Washington. 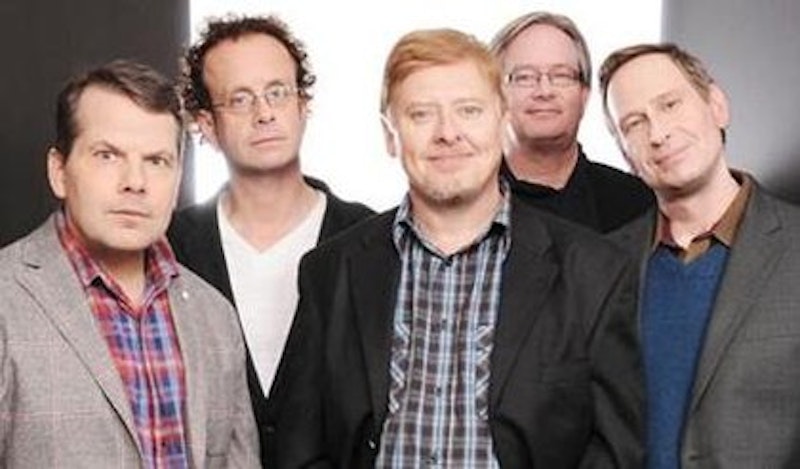 On Saturday night, I got my ticket at will call, walked into D.A.R. Constitution Hall, and was delighted to realize how close my seat was to the stage. I didn’t even realize they were going to be in the area, until about a week earlier, but then the lights went down and there they were, my personal Beatles. Except it was five Canadian guys wearing wedding dresses.

It feels odd to call a comedy troupe my Beatles, given that I’m primarily a music guy, but as I sat waiting for the show to begin, it was hard to think of a band I’d be as excited to see live for the first time right now. While thousands of music fans are pilgrimaging to music festivals this year to see longtime favorites like Outkast or Neutral Milk Hotel for the first time, I was losing my shit over The Kids In The Hall. I’ve logged hundreds of hours watching the show, re-screening every single episode more than I have with any other show besides maybe Seinfeld. Quotes from the show pour out of me even if nobody else who’s seen the show is around to catch them. I refer to cooked oatmeal as “Mr. Stevenson 2.”

Of course, The Kids In The Hall have toured a few times since their eponymous TV series ran its course on HBO in 1995. But I’d missed those shows, and couldn’t believe my luck that I lived just outside one of the five cities they decided to perform in this June. Anticipating the show had motivated me to break out my DVD box set and marathon episodes of the first two seasons all week. In fact, the only bummer about Saturday’s performance was lamenting that I wouldn’t be able to rewind the sketches and watch them over and over like I could at home. I kept trying to memorize lines from the new sketches, but mostly I just tried to stay in the moment and enjoy what was happening.

The “Kids” were a bit older and puffier than when the show went off the air, but actually not as much as I expected. Scott Thompson, who’d been worrisomely gaunt during his 2009 battle with cancer and subsequent chemotherapy, was back to looking like the healthiest member of the troupe. The Kids are in their 50s now, and are mostly playing characters they originated in their 20s and early 30s, but it didn’t matter—those characters were always a range of children, teenagers, adults and senior citizens. If plausibility mattered, they’d have women to play the female characters instead of putting on dresses and wigs.

On the Kids’ last full-scale tour, they performed an almost entirely new show, whether or not the sketches revisited familiar characters or not. For this shorter run, perhaps understandably, there were old favorites with little or no change from the original televised sketches. Mark McKinney’s Chicken Lady always wore on me as the broadest, most cartoonish of the show’s running sketches (somewhat predictably, it was the one KITH character McKinney reprised during his year on Saturday Night Live). But Saturday’s rendition of one of the old Chicken Lady sketches crackled with energy and brought back just how surreal and disturbingly sexual the character is. It also overcame the biggest technical snafu of the night; McKinney’s microphone had a bad signal and static kept buzzing through the PA during a sketch that relied heavily on awkward silences. But the Chicken Lady and her blind date, played by Dave Foley, played through it.

One of the other older sketches featured minor wrinkles in the execution that, in an odd way, made it funnier. When McKinney, as “Nena from Joymakers,” comes to KITH’s recurring corporate workplace setting A.T. & Love to help a bunch of stuffy businessmen throw a surprise party, she finds them surprisingly inept. And as the sketch went on, McKinney felt like a frustrated ringleader just like Nena, waiting for a ringing phone sound effect to arrive at the right time and finally breaking character to say, “I guess I’ll do it myself: ring ring!” When Thompson started in on part of the sketch a little early, McKinney called him out for jumping his cue but kept the sketch moving along.

A couple of other old sketches played out more or less verbatim—the office surprise party, and a riotous closing sing-along of “Running Faggot”—but some of the best parts of the night were new twists on old characters. One of my favorite sketches, in which McKinney and Bruce McCulloch play lawyers both named Gerald, got a great facelift full of hilarious new lines. A group of high-strung waiters at a fancy restaurant, fretting over a dessert, recalled a similar oldie, but the storyline of the sketch was distinctly different. Gavin, Bruce McCulloch’s absurdly talkative kid character, got a new sketch in which he revealed, unsurprisingly, that he’s on the autism spectrum.

Perhaps the best reprise of a familiar character, however, was the inevitably Buddy Cole monologue. Cole has always seemed like Scott Thompson’s raging id brought to life, an outlet for his most outrageous jokes and observations about queer culture. Cole’s had the largest life outside of the show of all of KITH’s characters, with Thompson adapting the character into a Buddy Cole book, a blog, an aborted animated series, and even, earlier this year, a stint as an Olympics correspondent on The Colbert Report. But all of those new forms the character has taken paled in comparison to the sight of Thompson live, riffing irreverently about current hot topics like bullying and transgendered identity.

The troupe’s other great monologue artist, McCulloch, also did a new solo piece, although as usual he did it as himself, not in character. It’s hard to tell how much of McCulloch’s stories are actually autobiographical, even in one where he references his life in comedy while spinning an odd yarn about moving into a new neighborhood and buying a poodle. In some ways McCulloch has the most distinctive comic voice that functions the same way outside Kids In The Hall, in projects like his great album Shame-Based Man or the film Dog Park. It’s a shame that he hasn’t found the proper vehicle to keep using that voice more (a sitcom he created a few years ago, Carpoolers, was canceled by ABC after one season).

The member of Kids In The Hall agree that the funniest is Kevin McDonald, and it’s true that he’s the member who can most easily get a laugh simply by stepping onstage or uttering his first straight-man line of a sketch. His bug-eyed appearance, quavering voice and endearingly odd physicality may help, but on Saturday it was also clear just how good he is at working a crowd. Awkwardly stalking the stage and singing an introductory song about the troupe early in the evening, he attempted to reassure the neophytes who were brought to the show by “your 41-year-old boyfriend who got high and watched us way too much in college.” That line somehow made me self-conscious, even though I’m a decade younger than that and started watching the show in eighth grade. The song ended with a joking promise that “We’ll never retire, until one of us dies… probably Dave,” which gave me hope that my first time seeing the Kids In The Hall won’t be my last.