But maybe ask them first. 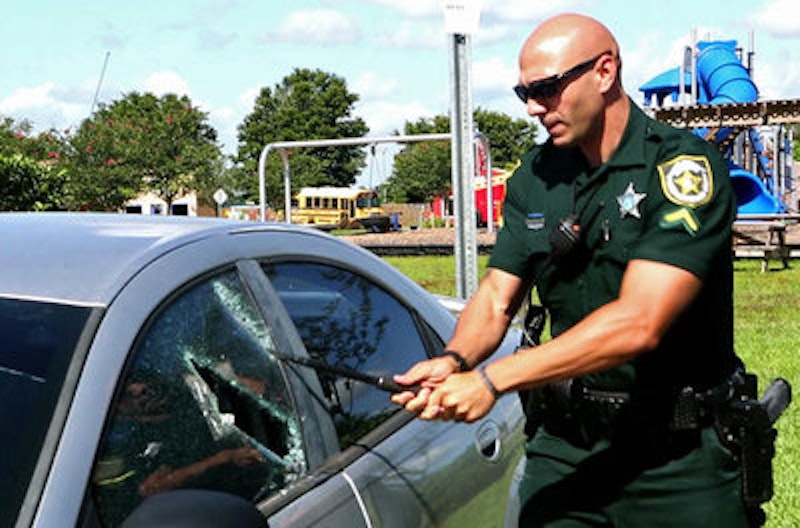 One of the nifty things about kids it that they're people. Sure, an infant is more like a really irritating combination of a pet that doesn't know how to use the litter box and an alarm clock that can't be set correctly. But by the time your pet/clock has reached 10 years old (like my son), it somewhat miraculously functions much like a human being. It tells jokes. ("Why did the chicken cross the road? To get the New York Times. Do you get it? I don't either, I get Smithsonian Magazine.") It thinks conceptual art is funny. It wants to be a thespian. It's got opinions and feelings and human type personality quirks. It is, to all appearance, an individual—somewhat smaller than average, and with poor table manners, maybe, but still.

Most parents, and presumably non-parents, are aware that kids are people. And yet, it seems oddly difficult for adults to act on this information. For example, Dan Kois at Slate recently described an incident in which he was in a parking lot on a hot day, and saw a couple of kids, 12 and nine, sitting in a parked car with the windows open. Kois was uncertain what to do.

"Already I felt conflicted about my response. In general, I worry that my own children/kids these days are overprotected in the name of safety. And since the day a random old lady scolded me for not putting a hat on our infant daughter, I’ve strived not to be one of those busybodies telling other people they’re parenting wrong. Sure, I judge—I’m human!—but I try to keep those judgments to myself.

But there was still something jarring about seeing two kids alone in a car on a hot day. I remembered my one brush with heatstroke, when I didn’t realize how sick I was until I almost passed out in the middle of a Mexican market. A similar lack of recognition on the part of these girls could be fatal, as it is 15-25 times per year in America, and I’d be the passerby who did nothing."

Kois eventually stuck around for a while. When no parent showed up, he went into the Starbucks and got a bottle of water, and put it on the trunk of the car, confusing the kids… and the mom, when she showed up a minute later while Kois was leaving.

So Kois felt he had various options. He could have stuck around till a parent showed up. He could have just left. As many readers told him after his initial discussion of the incident, he could have called the cops—though, given the fact that getting involved with child protective services has a far greater likelihood of being disruptive, horrible and dangerous than a few minutes in a hot car, I think Kois was right to discount that possibility. Remember the #myNYPD hashtag?  The police are not your friendly cuddle-bunnies, and once you call them, they can be hard to send away.

Kois says he was worried that interacting with the kids would be creepy… and in the podcast discussion he elaborates that he was thinking of trying to coax them out of the car and into the shade, which could’ve been misconstrued. He also seems to have yelled to them when he bought the water to ask if they wanted anything to drink.

But rather than approaching kids with the goal of getting them to do what you want them to do, or asking them to acquiesce in your decisions after the fact, why not treat those kids like people? If you saw an adult human sitting in a car with the windows open, and were worried that person would get heat stroke, what would you do? You'd probably ask the adult, "Hey, are you okay? Are you overheated?" And if the person said, "I'm fine," you'd move on, and if they said, "I'm thirsty" you'd see if you could get them water, or help them in some way.

As Kois says, adults can misread their danger, and kids certainly could as well. But the fact remains that people are generally better equipped to figure out what they need than random strangers passing on the street. A 12-year-old is absolutely able to tell you how long a parent has been gone, to relay where the parent is, and inform you when the parent is likely to get back. A nine-year-old can tell you if she is feeling seriously uncomfortable or not.

Kois is worried about walking the line between being an overprotective pushy jerk and a callous indifferent jerk—he's in an ethical quandary. But I think the heart of that quandary, and the reason that it's insoluble, is in large part because the presupposition is that the people involved aren't people. Kids sometimes have crappy judgment—but people in general often have crappy judgment. Nonetheless, whether kid or adult, if you're worried about somebody's safety, the best thing to do before you make possibly life-altering decisions (like calling the police) is to ask what they need and what they want. It's hard to treat people ethically if you don't first treat them as people.