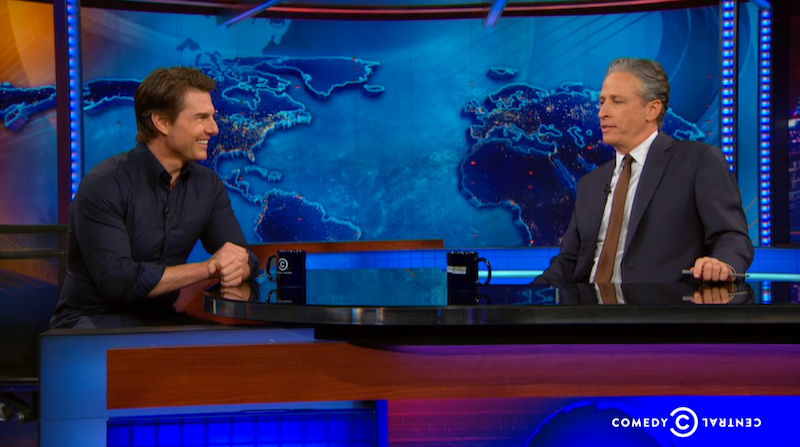 Everybody despises Tom Cruise. He's a mall star and famous as a celebrity who's converted his soul to a parking garage. People look at him and remember how movie stars are fake, they way they looked at Al Gore and remembered about politicians. If Cruise killed himself, people would spend decades pecking over why, just because they found it satisfying. Somebody with a life like his—that streamlined, blueprinted, Dianeticsized thing—ought to be rejected by nature. But for now he's standing next to Jon Stewart, and what the hell.

The two of them motion at each other, refusing to sit down. Arms out, very much Alphonse and Gaston: two great ones deferring. Cruise honors Stewart by taking part, since Cruise has been that big a movie star for that long. (People hate him like the mall, but malls did good business.) Stewart bounces honor back on Cruise, since Stewart is beloved by (or followed by) many of the same people who find Cruise so distasteful.

Why does Stewart honor Cruise? He doesn't give a reason. There's no hearkening back to a great role or standout moment. Stewart just treats Cruise as a big deal, which he is from every standpoint except that of a media fan's self-respect. Even those who don't really object to him find it hard to be grateful that he's there. But Stewart whoops it up for Cruise, lofts his voice when announcing his name. Perhaps they're all buddies at that level. Listen to Ben Stiller and his co-workers on the commentary track to Tropic Thunder. They call him “T.C.” No explanation, just “Yeah, I remember T.C. worked out that dance,” and so on.

The audience manages a volley of shrill, extended screams as host and guest prepare to sit. The screams are female, I suppose, or meant to sound that way. Cruise barely acknowledges them. He’s getting through the interview just like you think he would: watchful and self-contained from behind his badge-like smile and broad chest and reverse-cliff profile. The combined effects of smile, chest and profile, along with his regular-guy head ducks and office banter, add up to a great prow of phoniness, like Cruise was the forward part of something breaking through from a dimension of bullshit. Yet he's very smart, and you can tell. He's one of the few Daily Show guests who knows to lean back. The big teeth and nose, the authoritative ha-ha-ha laughs (barked out in equal links, like sausage), make his presence known in the gulf of space between his profile and Stewart's. But he lets that gulf be. Stewart leans in and performs, Cruise drops remarks as needed.

The two of them apparently have agreed on “gamer” as a trope to tie them together. They drape jokes on it early on in the interview, then at the middle, then at the end. The excuse is that Cruise's new movie (Edge of Tomorrow) is kind of like a computer game. But the theme of the jokes is that a gamer must be a nerd and therefore a virgin, meaning he's like Stewart. Meanwhile, Cruise is the cool guy that the gamer envies. Therefore, Cruise and Stewart can now talk about each other in some sort of personal way. Maybe they need a hook because they don't know each other so well. Possibly they're not buddies, just neighboring residents in the stratosphere.

Body language, hair dye. Stewart extends a sincere plug for Cruise's film. Cruise, shoulders slung back in his chair, ducks his giant smile and slaps his knee. He's graceful even as he's being full of shit, because he knows how to hold his body. He's one of those actors who listen to the coordination experts and wield their instrument from a strategic place near the back of the neck. But Cruise brings a touch of his own, namely his way of breaking his movements down into right-angled lines. A lot of such lines, because his movements are graceful and not jerky, but with few curves among them. Grace usually has some curves to it.

Cruise's hair is a solid brown, and his forelock never budges. The brown has too much gloss to be human. His face looks good, you're surprised that somebody's who's 51 could look like that: clear contours and no sag. On the other hand, he doesn't look young. For inhuman decades he looked like somebody who was not just handsome but of the right age to benefit from handsomeness. Now he doesn't. Lean as it is, his face has given up small strategic areas to thickness. He probably should stop dyeing his hair, and he shouldn't go on stage in just jeans and a shirt, like a college boy. He looks like his best bet is to be distinguished—that age.