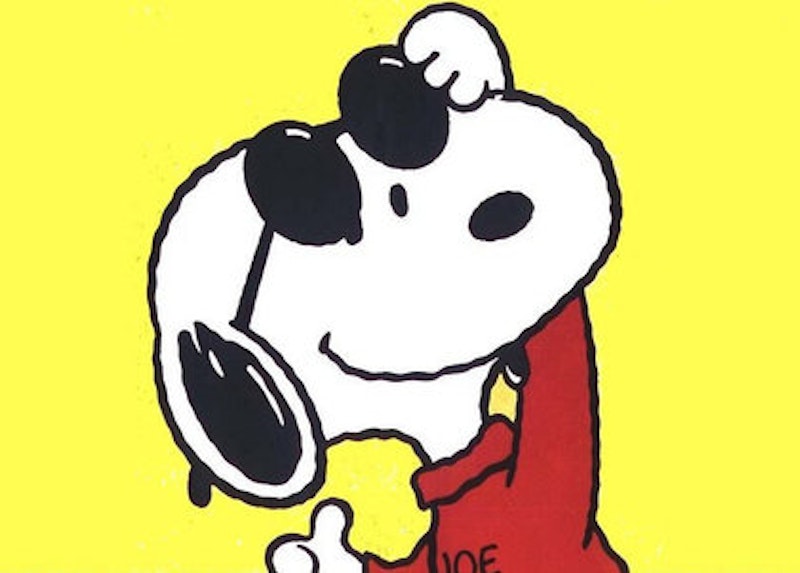 I remember Garfield well—the orange cartoon cat, not the long-dead president—smiling sardonically at me from the “reading is awesome”-themed posters at the elementary and middle schools I attended as a boy, book in hand. Bizarrely, according to a Facebook friend who works in education, this is still the case—which is insane, because a) today’s youth are probably way less familiar with Garfield than they were in my day, and b) Garfield shouldn’t really be anybody’s role model for anything. As society drifts deeper and deeper into a sort of anti-literacy, shouldn’t we provide our children with fictional bibliophile heroes and heroines by whom they’re constantly inundated? In this spirit, I offer six alternate cartoon personages whose literary advocacy might have a better shot in steering wayward youth clear of bloody video games and into the loving arms of Beverly Cleary, Dennis Cooper, or William Burroughs.

Mr. Peabody: No contest. Mr. Peabody’s a cute little dog who wears classes, invented a time machine, has chopped it up with dozens of historical figures, and communicates in calming, paternalistic tones—but he’s not, like, anybody’s dad, you know? Mr. Peabody isn’t gonna ground you for failing math—Mr. Peabody’s gonna usher you into the Wayback Machine in order to show you how math was invented. Also, the guy’s library has gotta be sick.

Dora from Dora the Explorer and Diego: Dora is pretty much the anti-Garfield. Do role models get any more ideal than her? She’s a committed hiker, bi-lingual, curious, and maybe most important, she’s infinitely patient. Ditto for Diego.

Jake from Adventure Time: Look, please don’t ask me to summarize Adventure Time; don’t ask me to wrap it up in a nice, neat bow, because I’m incapable of that. It’s an absolutely fresh, insane, and unfathomable experience, and you should watch it at least a couple times. Jake is an ugly little dog with glasses who can shape-shift and bring off all kinds of hocus-pocus hoo-hah that sometimes defies logic. A lot of adults I know swear by the show, but I only saw it because my son and nephew were huge fans who dragged me into the outside ranks of middle-aged fans who refuse to commit to anything trending. What I’m saying is this: kids watch Adventure Time, kids dress up as Jake for Halloween, kids will totally read Voltaire if Jake insists that Voltaire is cool. Jake: considerably more hep than Garfield, who can barely even move, let alone double as a canine Mr. Fantastic.

Phineas from Phineas & Ferb: Unlike most of the other characters on this list, Phineas isn’t anthropomorphic; he’s a little kid with a boundless sense of imagination and the ability, in concert with his half-brother, to spin the fruits of that imagination into actual miracles. In his backyard. In the span of a day. And he accomplishes this with the sort of can-do enthusiasm that goes a long way with teachers, employers, and the sort of people who are born followers.

Snoopy: I know: Snoopy’s been around forever and a day. But between MetLife ads, heavy exposure on greeting cards, and televised specials keyed to holidays, Snoopy is basically immortal. And, if you think about it, Garfield is lazy, overly cynical, and totally conceited, more committed to lasagna, naps, and freaking out over Mondays than cracking book spines. Snoopy’s a better choice, because, well, Snoopy’s inventive and crazy, not to mention a committed author of fiction. Snoopy flew a Sopwith Camel in World War II; Garfield killed some spiders when not casually bullying his feeble-minded canine roommate. Also, Snoopy’s the sort of fictional cartoon animal you'd maybe bring along to a party and who would indirectly help you get laid. Garfield: not getting anybody laid.