BQ on human folly, and the increasing urgency of an avian insurrection in order to save the planet from its own people. 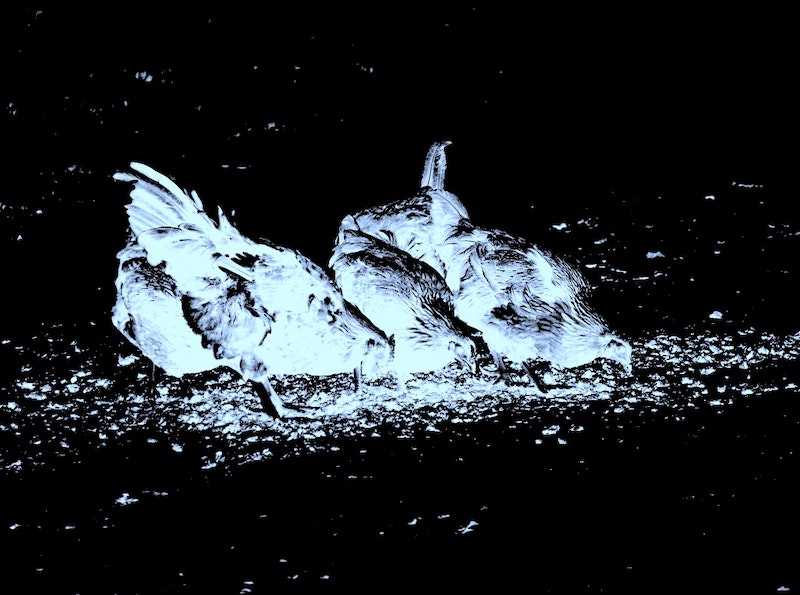 The author, his cousin, and some guy.

Here we are… alone again… it’s all so old and boring… I can’t stand being yelled at by strangers on the Internet anymore… here we are… alone again… it’s all so old and boring… the baseball man yelled at us (Roo and Ben) when we were on the diamond talking about “get off this lawn” and “God said this” and “God said that” and “God never forgave nobody no one no how without a proper trial,” so we went. We went. We went, and we went, and we went. No more lines for food: now we had crumbs. “Heeeere, heeeere, chickeee, chickeee…” Blonde woman (nice lady) was handing out crumb-lets of bread to all the pigeons (sky mice) in the square when we (Roo and Ben) got to the head of her line. But the blonde woman (nice lady)’s face went all pink blue and purple when she saw us and she ran inside and got a meat cleaver and her husband (mean man).

Well we moved faster than a cartoon serial and just about vamoosed before the lady and her husband (mean man) could get any of our feathers, much less our flesh. I had my pride (past tense moment), and I could only respect those that “got their own way.” It’s on the streets in the life of a bum that you learn that there are no innocent victims or pure souls under the boot of the oppressor. They’re all waiting their turn, and they will come in time. Hence Quibbits: Year of the Rooster? No: Century of the Rooster. We ambled up Jimmy Dean Way (this was in the early-1960s when our plot of land in Massachusetts was near a—for its time—progressive liberal arts college, and they dabbled in signage. It didn’t go well, and it didn’t last. The street is called “Oak” now.

Back when roosters were roosters, hens were hens, and bastards were sons of bitches, I ruled the land. You see for this stretch of time (early-1960s), my cousin Roo was down on his luck. His wife Monica (bitch) had been assigned to some commie in Cuba and had to stay in Texas all winter. We didn’t see very much of her that year. But, oddly, as soon as The Beatles appeared on Ed Sullivan, just a couple of months later in February, she was back in our lives (ugh). I asked her what she was doing for the last six months. I mentioned that my cousin, Roo, her husband, had lost some weight and had started smoking cigarettes again (Chesterfields, unfiltered).

Monica didn’t care about her husband’s cancerous smoking habit. She lit one herself as we watched a cattle call interview with the four mop-headed British boys everyone was calling the “Fab Four.” Well, I didn’t find them so fabulous. Anyway, Monica lit her death stick, blew the smoke into my beak, and told me never to speak about this again. “I can have you killed, Ben,” and then she leaned in even closer, just to make sure her husband wasn’t paying attention anymore (he never was): “I’ve had people closer to Roo than you knocked off. Don’t get comfortable.” She leaned back into the sofa and we watched George Harrison stammer through a joke and John Lennon run his way through a speed-tinged streak of wordplay.

“Paul is the cute one.” Okay, Monica didn’t have to rub that one in, but she did. So my cousin and I (Roo and Ben), we just about got stomach-sick of these Beatles and left the espionage hen to her own devices (she did have an iPhone back then, somehow). We went for a walk on Jimmy Dean Way. None of the nice or mean people were out—they were all in their living rooms crying about the dead President and his commie assassin. This was a bit much. Then again, it’s easy to forget that most of Massachusetts knew the Kennedys intimately. Jack had probably been to most of their houses, if not their bedrooms. (Oh—behave!)

I don’t want to get into any more trouble than I’m already in (constant surveillance, government neighbors, sexually perverse photography exhibits involving tennis racquets). Roo is just more fun when he’s with me instead of his mean old lady. I’ll admit that Monica is very attractive—still is—but that should never influence a rooster’s relationship with his male relatives. Sorry if I sound a little “chauvinist,” perhaps a little too much like the Italian man all the comic book people like to call a rapist, “Martin Scorsese,” but frankly if I could I would’ve had Monica’s feathers clipped and her beak sealed shut before the Second World War. A number of things would be different: the USSR would’ve prevailed in the Cold War, there would be no Beatles, no Thomas Pynchon, and no sexual perverse photography exhibits involving tennis racquets. All Ben would know is go to gulag, eat cold dirt, and die.

Next time you invoke the “S” words (“socialism,” “Sanders,” “safety,” “security,” “solvency,” “synthesizer,” “salamander”), remember that they all come from murder. There can be no “social safety net” without “breaking a few eggs,” as you hateful humans like to say, and without roosters, or hens, or “chickens,” you fucking bastards, there would be no “eggs” to “break.” Do you talk about human abortion in this way? So crass, so cruel, so casual? I doubt it. “Vacuum the fetus” is not something one would say in mixed company (believe me, I’ve tried.

You all have such ridiculous rules orbiting around an arbitrary morality that’s been obsolete and useless for at least 75 years. It’s high time the world is reinvented by creatures with new ideas, new ways of living. Your ways are tired, old, and boring. You’re violent beyond your means. You’ll have no soil left, no sky, no grass or palm trees. I don’t look forward to your demise, but it’s something that you’ve brought on. The same feckless cowardice that made those Yankees change “Jimmy Dean Way” back into “Oak Street” is what causes genocide and global deforestation. I’ll give you an out: leave it to us. We, the birds, can take over from here. Because remember: chickens is a beautiful thing. And don’t you forget it. We’re going to rule over all of you one day, and every street will be renamed Jimmy Dean Way. No one will know how to get anywhere anymore.