Sex and the City Reboot

When it comes to the Coronavirus, are you a Carrie, Miranda, Samantha, or Charlotte? 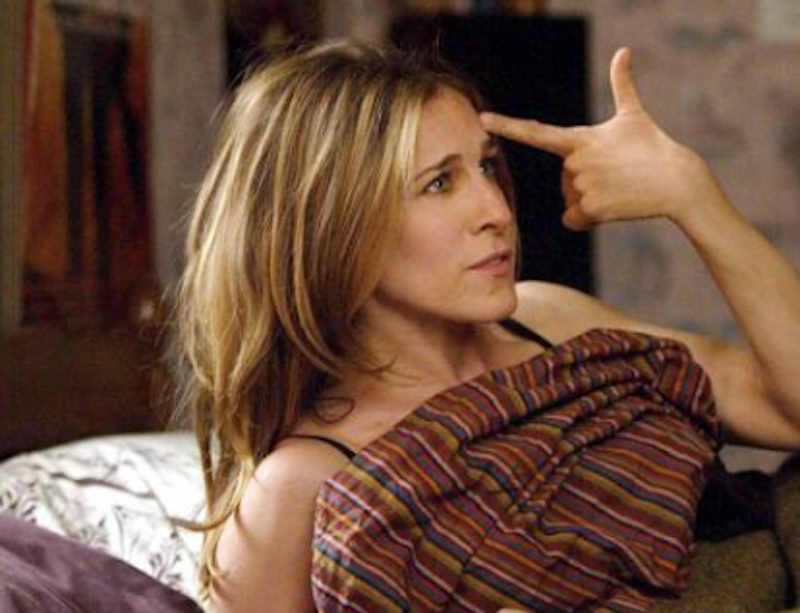 It’s a special kind of pang when you sleep with a man for the first time and the next day he fails to call and say, “Start prepping for the coronavirus!” I’ve spent the week going to and from the supermarket and drugstore stocking up on supplies (they’re out of hand sanitizer!), reading CDC and WHO updates, and waiting for him to call. On the following Sunday when he still hadn’t reached out, I tried to stay positive: maybe he likes me and wants to call, but his lungs have filled with fluid and he’s lost consciousness.

“A life-threatening pandemic really makes you think about what’s important,” Charlotte said when I told her my fears—that Mr. Big was either dead or just not that into me. As I went about duct-taping the air-vents in my apartment, I thought of Mr. Big—his hair, his mouth, his body against mine—and the fact that it was Miranda who’d told me to start stockpiling food and not him.

It’s one thing not to call on Valentine’s Day if you’ve only just started seeing each other, but quite another not to at least warn you to “get prepared now before there’s a run on the supermarkets!” I couldn’t help but wonder: is he stockpiling canned goods with someone else?

This week has been hard on all the girls. Miranda bailed on Sunday brunch after hearing of a suspected coronavirus case in Brooklyn. “You’re gonna need a month’s supply of toilet paper and coffee,” she told all of us over email, which is how I knew what to do. “Act now! It’s spreading!”

Meanwhile, Samantha refused to shake the hand of every man she had sex with this week, worried they might be infected and not know it, as some people are asymptomatic carriers, according to the regular updates Miranda sends.

At first Samantha dismissed the whole thing, insisting she wouldn’t let some virus interfere with her sex life. But then Miranda got Samantha worrying when she sent her one of Chris Martinson’s YouTube videos saying to expect a run on the shops. The panic has already begun in Hawaii, California, and Washington, he said, showing photos of a mobbed Costco. You’ll need canned goods, medical supplies, and anything else you use on a regular basis, he said.

That’s when Samantha ran out to the Pleasure Chest, worried there might be a run on vibrators and lube. “Ladies, if I’m gonna go out, I’m going out coming!” she told us over FaceTime. I also had a strong reaction to the video and immediately bought five new pairs of Manolo Blahniks. Don’t worry, I washed my feet immediately after trying them on.

The pandemic has probably hit Charlotte hardest of all. “I don’t think I’d mind the apocalypse if only I had someone to share it with. All my married friends are going to the Hamptons to avoid infection, while I’m stuck in my apartment by myself for a month. “I don’t want to die alone!” Charlotte cried.

Miranda waved her hand. “Married or single, most of us will die in quarantine. Have you got your supplies?”

“No. I know you told me to start stockpiling last month, but part of me feels like if I do, I’m giving up on finding a husband within the next two weeks. Men don’t like a woman to be too self-sufficient. They like to feel needed, like, ‘Hey, when people start stabbing each other in the streets for canned beans, we can hole up at my place. I have masks for us both!’ Having more beans and masks than a man is emasculating,” she whispered.

Miranda says Charlotte is stuck in the middle ages. “This isn’t the plague, Charlotte, where women need men to bring out the bodies. This is the 21stcentury when a woman can take herself to the hospital when her lungs begin to fail. Personally, I’m thankful for being single; having another person around only increases your chance of exposure. And I can do without some paternalistic idiot telling me this is no more serious than the seasonal flu. This guy I dated last month was so smug about the whole thing. Would you believe he called me hysterical? I can’t wait for him to start coughing. I’ll be like, see, you should’ve called me for a second date instead of that blonde cocktail waitress who’s also dead now thanks to you.”

“I don’t know what to do,” Charlotte said in a panic, “My biological clock is ticking as fast as this virus is spreading, and I just can’t afford to stop dating for a month!”

As for me, I just read an article on my computer about a new case in California and then accidentally rubbed my eyes so now I’m worried about getting a computer virus. It’s all too much. It’s been a full week since I’ve heard from Mr. Big. I’m dying to call him, as he just got back from a business trip to Seoul and due to his age and cigar habit he’s in the high risk group, but I don’t want to seem like I’m more into our relationship than he is. It’s hard to find the balance between asking if someone has been quarantined and seeming too eager. I mean, we only slept together once. Even if he’s dead, is it any of my business?

Mr. Big is as commitment phobic as Miranda is Covid-19. Me, I don’t know what I’m more afraid of: Dying or Mr. Big not calling me for a second date. I mean, I know what to do about Covid-19—wash hands regularly, try not to touch my eyes, nose, or mouth, avoid gatherings in enclosed spaces—but I still don’t know how to guard against heartbreak.

While I wait by the phone, I continue watching the news, half-dreading/half-hoping he might be a newly reported case. At least that would explain his silence. After a long Sunday of reading coronavirus Updates—community spread in Northern California, new cases in Rhode Island, two fatalities in Washington state—and waiting for Mr. Big to call, I realized something: Pandemic or not, I’d say yes if he asked me to join him in self-imposed isolation for 30 days. I know it was only one date, but sometimes you just know, you know?

Miranda’s not at all worried about dying alone, as long as there’s no supply chain interruption with Netflix. “My biggest fear is losing WiFi.” Charlotte meanwhile has decided to try Internet dating. “Not meeting them in person is actually very efficient. I’m going on five video-chat dates per night!” And while Samantha’s chief concern is running out of batteries, me, I’m worried about Mr. Big: Even if we do both survive the coronavirus, will our relationship?