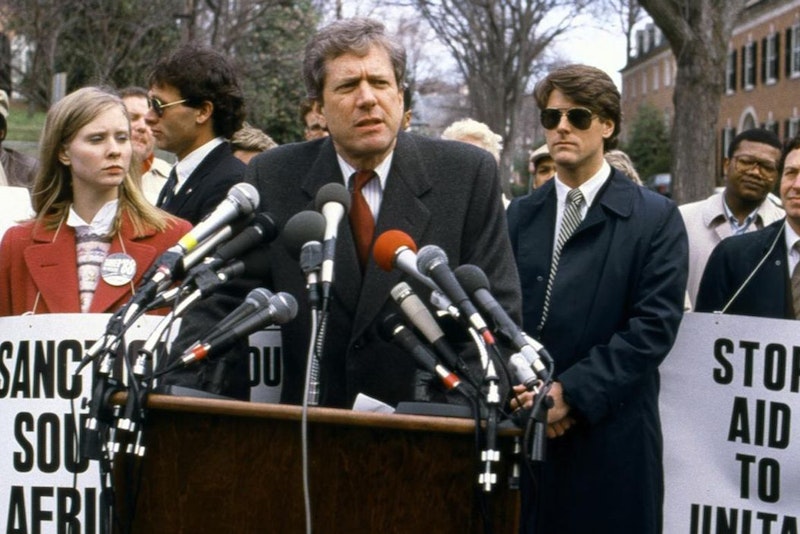 Ebola feels like a world away. When Barack Obama managed to contain a very contagious and very fatal epidemic from becoming a pandemic in the fall of 2014, Donald Trump was tweeting his advice. Pre-2016 presidential politics have gone out the window along with most of the satire that played too nice with satanic politicians. Like The Daily Show and its spinoffs, I figured Robert Altman and Garry Trudeau's HBO miniseries Tanner '88 and Tanner on Tanner would be wildly out of date and useless for any insight into contemporary politics. It's amazing how fast The Daily Show deflated. Tucker Carlson was right to question Jon Stewart going soft on candidate John Kerry in 2004, beginning an interview with, “How are you holding up?” The Daily Show’s integrity collapsed at the start of the 2010s with the Rally to Restore Sanity, a pitiful attempt to mock the much larger and actually vibrant Tea Party movement. Ironic college liberal condescension toward flyover citizens ruled by their guns and their God led to Sarah Palin—whomp whomp. By 2010, there was no righteous indignation left in Jon Stewart, and his colleague Stephen Colbert has since proven himself as clueless as the pundits he used to mock brilliantly on The Colbert Report.

I didn’t expect to like Robert Altman’s Tanner ’88 as much as I did—any Altman is worth watching, but for years I figured it deflated like The Daily Show, The Colbert Report, or D.A. Pennebaker’s The War Room, which now serves as an excellent example of the moral rot and hypocrisy at the heart of the Democratic Party. Altman and Trudeau’s series, aired on HBO throughout the 1988 campaign, barely mentions Michael Dukakis or any of the other candidates. Michael Murphy plays Jack Tanner, a weird but basically nice guy unequipped for retail politics. Al Gore, Joe Biden, and Bob Dole make cameos, but that’s it. This isn’t a star-fucking exercise like the White House Correspondents Dinner. Tanner ’88 remains relevant because its primary critique is of the media—specifically, a political media with too much influence pushing candidates for superficial or nefarious reasons. Those who rewrite history and lament the days when Democrats and Republicans could have a beer together are wrong—ideological enemies can only be friends to a point. They certainly can’t sleep together.

Jack Tanner struggles to break through in a crowded field, and has terrible interpersonal skills for a politician. He’s perpetually confused and cautious, nervous to the point of self-sabotage, always avoiding a dark past we never learn much about (his father doesn’t speak to him, his campaign manager T.J. played by the wonderful Pamela Reed may be a former lover, and when he finally gets some momentum via a hidden camera ad by Deke, he almost fires him). His daughter Alex (Cynthia Nixon) is arguably one of the most interesting and overlooked characters in all of Altman’s work. In Tanner ’88, and especially in Tanner on Tanner, she breaks out as a true eccentric—like her father—surrounded by well-played and well-written but nonetheless archetypes like the tough as nails boss (T.J.), the wonk (Emile), the perv (Deke), and the ditz usually played by Shelley Duval (Andrea), among others.

Alex is a workaholic control freak who, despite being a college student, pulls off several coups for her father’s campaign, helping take it all the way to the convention. In between there are the typical road show antics like comms directors sleeping with bass players, buses breaking down on the side of the road, an assassination attempt, and eventually delegate trading, a scenario that seemed much more likely when I watched Tanner a few weeks ago than it does now. Alex is an extrovert but she’s also sensitive and thin-skinned, and often breaks down and overreacts and always exaggerates (Nixon, in character, compares “her dad’s” assassination attempt to JFK and RFK). The film within a film in Tanner on Tanner, the documentary My Candidate, is a milquetoast mess and the audience hates it. She cries in front of all of them, pushed forward only by Robert Redford, in the audience wearing a Hawaiian shirt and small glasses. Later, when denied an interview with nominee John Kerry by former colleague T.J. on the floor of the 2004 convention, she storms off in tears.

These series, about five hours of material, come closer than anything else to the alchemy of Altman’s 1970s work. Short Cuts is a great movie with a lot of actors, but most of them never interact. We rove over Los Angeles, as if in that pesticide helicopter, poking in windows and doors on private lives and a few affairs and accidental meetings. Tanner ’88 not only has the busy, dense feel of Nashville and McCabe & Mrs. Miller, it has the bulletin edge of everything he made from MASH through Buffalo Bill and His Indians, or Sitting Bull’s History Lesson. Thirty-two (and 16) years later, these works are not sunk by sarcasm and a tone of pabulum and easy jokes and ineffective earnest messages.

These episodes are about how the media doesn’t care about the people and how much influence they have over them. They’re as contemptible as the politicians they cover. The politicians Tanner interacts with are also cardboard cutouts meant to resemble human beings but behaving like no such thing. Tanner walks slowly with Bruce Babbitt along the water, buttressed by Secret Service, and in the context of a light satire that mixes fiction with reality, the absurd absence of reality in the actual politicians.

Tanner is an interesting character. Babbitt isn’t. But he hams it up, in his own way. Babbitt isn’t a whore like Ronald Reagan or Bill Clinton, but he plays the part of the reserved sage politico giving advice to someone who still has a shot at elected office. Besides holding up in its media critique, these two Tanner series are the last great ensemble work Altman did before he died in 2006. Yes, there were many movies, some better (The Player, Short Cuts, Cookie’s Fortune, The Company) than others (The Gingerbread Man, Kansas City, A Prairie Home Companion) in between.

But in the 16 years that separated the series, not much changed in presidential politics. Geopolitical events, obviously; disruption in print and television, certainly. But an event like the "Dean scream” is exactly the same as Biden lifting a Neil Kinnock speech and saying, “I’ve done dumb things and I’ll do more dumb things in the future” before dropping out. The gravity of presidential politics wasn’t elevated after 9/11. It took Donald Trump winning for people to take it seriously all of the time. The Tanner series both say: stop watching so much TV, it’s lying to you. No wonder the cameos are limited.