The beloved sitcom tells us to be happy for death. We shouldn't be. 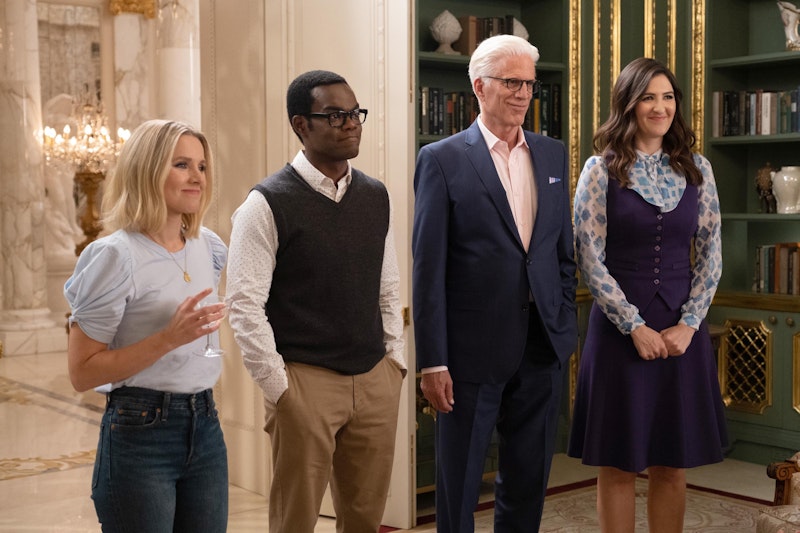 Pop culture likes to sell death. Eternal life in science fiction and fantasy is almost always portrayed as boring, tedious, corrupting, or all three. The limits on life, we're told, are a blessing. That's supposed to be a profound message. But really it's a sign that we're afraid to imagine what a fuller life would mean.

The final season of The Good Place elaborates the usual celebration of termination with unusual explicitness. As longtime watchers of the series know, it’s set in the afterlife. Self-centered Phoenix asshole Eleanor Shelstrop (Kristin Bell) transforms, over four seasons of being dead, into an altruistic world saver. With the help of friends including her moral philosopher boyfriend Chidi Anagonye (William Jackson Harper) and reformed demon Michael (Ted Danson), she reworks the afterlife from an unjust place in which everyone goes to hell into a system of ethical improvement in which everyone eventually learns to be a better person and goes to the good place—heaven.

The last episodes of the fourth and final season deal with reforming that good place. It turns out that living in bliss and contentment for eternity is really boring; everyone in the good place is an enervated and miserable zombie. So Eleanor and her band of do-gooders get to work, and decide to give everyone in the good place the option of going through a door into non-existence at any time. The possibility of an end—aka suicide—perks the inhabitants right up. The season finale is an extended coda in which the main characters one by one choose to terminate their never-ending lives of love, learning, and pleasure.

The plot is obviously a meta-commentary on the series itself. Fans want the series to go on forever. But sometimes it's better to stop before you run out of ideas. Saying goodbye to beloved characters hurts, but it's necessary lest they cease to be beloved. Death is in part just a metaphor for cancellation.

Cancellation, though, is also a metaphor for death. The need to end a show before it turns sour becomes an argument that you need to end a life before it goes bad. Heaven’s an eternal round of visiting with loved ones, going on trips, revisiting past glories, and learning new things. But even that becomes a grind if extended too long, the show assures us. Chidi, who loves to read and study heavy volumes of moral philosophy, eventually runs through them all and starts reading crap like The Da Vinci Code. Tahani (Jameela Jamil), who was estranged from her parents in life, reconciles with them—but eventually gets sick of hearing them say, "I love you." Perfect fulfillment is a drag.

It's true that watching happy people be happy forever without conflict is a difficult premise for a television series; The Good Place has become much less watchable as its characters become paragons of virtue. But would happiness actually be a horrible thing to experience or live though? Eternity is a very long time, but you generally live life day by day, and if you're eternally young and surrounded by loved ones with an endless supply of new things to learn and new skills to acquire and new people to meet and learn from and love—that doesn't sound like a nightmare. Sure, eventually I'd learn Spanish and the banjo and read every Peanuts comic in order. But by the time I was done with that, there'd be new things to read and learn and do. I'm not going to run out.

The Good Place's perfect imperfect afterlife looks a lot like retirement. And there are a lot of people who fear retirement, because they're worried they'll be bored, won't have friends, or won't have anything to do. Capitalism, and the grind of getting a living, is so ubiquitous and all-encompassing that people have difficulty seeing any other way to live. Labor shapes not just how we spend our days, but what we can imagine. Freedom and possibility are so overwhelmingly different from how most of us live that they seem like a threat. Fear and anxiety are woven into our sense of selves in such a way that the thought of waking up every day without them sends us into paroxysms of fear and anxiety. Without my misery, am I even me?

One way to answer that is to say that misery makes us who we are, and that if we didn't have it, we'd have to manufacture it. Limitations and death give us meaning, and the more quiet strain of Christian philosophy is right when it says we should be grateful for the unpleasantness imposed on us by the world, whether that's a short lifespan or a lifetime of struggling to make ends meet. Hardship is for the best in the best of all possible worlds.

Or, an alternate answer is that misery is wrong, and the arbitrary hemming in of happiness imposed by nature or our peers is not good for us. "Your life is better when it's not too large" is presented as wisdom. But it's just another excuse. Human beings aren't sitcoms. It's not a relief when they end.