Keep your phones off in the club, posers. 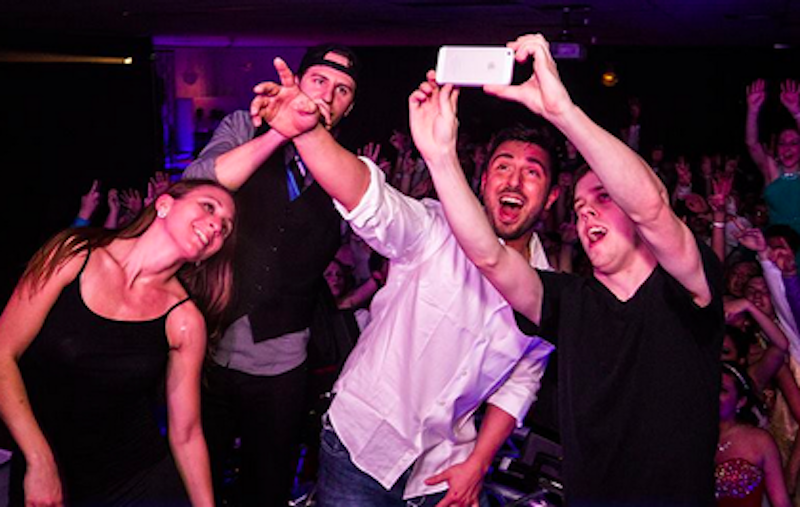 Nothing kills my buzz faster than being in a nightclub next to some poser assholes taking selfies on the dance floor, especially when they cut the flash on because duh it’s supposed to be dark in a club. I’m all, can you not? Before “selfies” were a thing I took plenty of pictures of myself in nightclubs, like when The Simple Life was still on the air, and my friends and I were always thirsty to be photographed by the party photographer because if s/he didn’t photograph you then you weren’t really there, were you?

I still take photos some nightclubs, but when I do they’re always discreet, I never use flash, they’re never selfies or pictures of other people, and I take a maximum of two pics over the course of the whole evening. What people don’t realize is that taking pictures and videos with their phones at the club is ruining their night as well as completely killing everyone else’s vibe, too.

People use their phones on dance floors because like all performance, nightlife disappears when the sun comes up. In the digital age everything evaporates so quickly, or goes up into the cloud, meaning people are hungry for a way to preserve their most meaningful experiences. Who cares if you were there if you don’t post a Facebook status telling people you are there? Were you really there if you don’t upload a photo as proof?

On a more practical level, though, having your phone out gives you an excuse to be alone at a club—a crutch to entertain yourself by the wall if you’re too shy to talk to people.

Nightlife is supposed to be about escape, fantasy and being removed from the real world. You’re supposed to let the music transport you someplace more exciting than the everyday. Even more than that, though, nightlife is also about story telling—the stories we tell about who hit on us, or what outfits we saw, or what we did, or how much we drank, or how good the DJ was, or how high we were, or who we had sex with in a bathroom, or how big this guy’s dick was you grinded on. You know, that type of stuff.

Many clubs in D.C. and New York have tried a “no photos” policy, but nobody really takes those rules seriously because having a good Saturday night often means being able to take photos.  On the contrary, Berlin nightclubs are notorious for their anti-photography policies, reminding clubgoers that taking pictures inside the venue is strictly prohibited. Like seriously, you will be kicked out if you get caught snapping pics. At the door bouncers will ask if you have a camera and tell you not to take pictures, not even with your iPhone. Some places take a more indirect approach, posting signage around the club that photography is prohibited. And if those warnings weren’t strenuous enough, some clubs include the no photos ban on their wrist stamps so you are reminded not to do it every time you think about getting your phone out.

I recently got back to London after spending a month in Berlin, and the most striking thing about reacclimating to the London club scene is that absolutely everyone takes photos. At an East London rave last weekend someone used a flash next to me and I was completely blinded for a few minutes. I’ve had to stop dancing more than once because someone made a half circle to take a group photo. Idiots.

You club differently when you focus less on your cellphone and more on the people around you. You focus more on dancing, flirting, connecting with the crowd, and being in the moment. You stay completely within the experience.

At a certain level you have to wonder why people are going out at all if they’re going to be staring at their smartphone the whole time.