Says Here George Takei Is Like the Dalai Lama

Old Star Trek actor bestows something or other on masses. 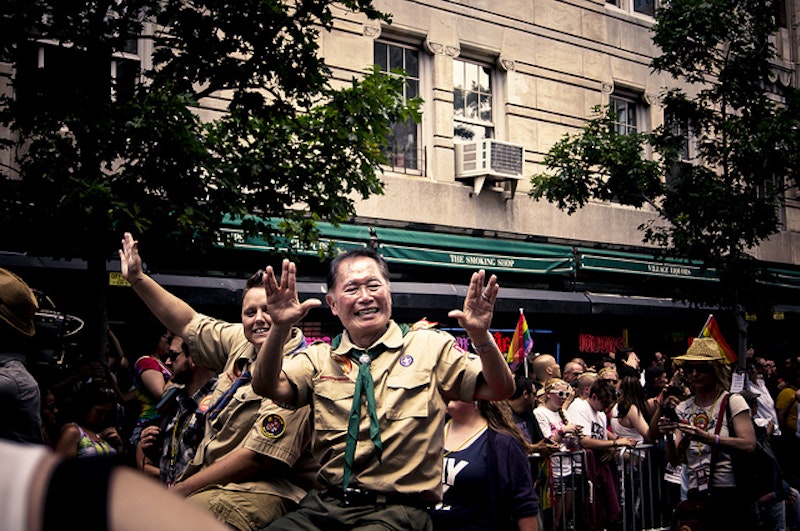 “Shortly after I began following George, I started to think of him as a sort of Dalai Lama of popular culture because of the comfort he seems to give his fans.”

He's just a jolly gentleman of advanced age; skin papery, smile stretched wide. To think about him is to feel good about yourself, like a dab touched to your reddened skin. It's a moment when you don't feel like some private membrane is itchy; it's a moment when you feel like you're right, things tell you you're right. Like when the calendar turns up an affirmation that makes sense. You know this is the sort of person you're supposed to like, and you do like him.

The Dalai Lama belongs to this group. So does George Takei. With the Dalai Lama the feel-good has to do with Olympic-style meditation and his political martyrdom and his niche as stand-in for some heavy thing that has the weight of religion but smells a lot better, for that overhanging brocade knit from herbal tea and Sunday morning intentions and mistaken by many for Tibetan Buddhism. (He is also the head of actual Tibetan Buddhism, which counts too.)

With George Takei, the feel-good has to do with gay marriage and the Japanese internment. Behind both lie this idea: It's not our world anymore and we'd better get used to it. That is, not our world if you're white and hetero. America is multicultural now and we're quadruple- or quintuple-gendered, sextuple-gendered. Only pedants keep track. The rest of us just know the old graphs have lost their tops or sides or something.

We also know that we've committed crimes and brute deeds and figured they were okay because the majority can pull any sort of shit and declare it in-bounds. And we know that pronouns don't go where they used to, and that they'll keep bouncing around each other in a he/she dance until genitals, anatomy, sexual preference and sexual behavior have found a finite number of combinations. Dimly, we know we'll be buried before that happens.

Then George Takei grins like a robin and we're reminded that the new order is just people being people. We like the good old man, and we know we're okay by the new order and its shape. Its rules, to be quite frank. Liking him is a small mental habit that keeps the psyche feeling lined up with the big rules in life, the things that make you a decent person and not some shit.

He's a vain fellow—it's one thing that stands out from his autobiography (To the Stars, 1994). He's not so much an actor as somebody who wants to lift his chin and beam and have people act like it's sunshine. Now his moment has arrived: we just want reassurance, he just wants gratitude. The Dalai Lama wants Tibet out from China and he wants spiritual things, which are attractive but also a lift; to get the full value out of doting on him, one has to feel the glamour of keeping your psyche fresh by sitting still on floorboards. George Takei is an easier fix, the smile-face side of the moments during The Daily Show when everybody gets to laugh at closeted Marcus Bachmann and his swishy dancing. The Dalai Lama is someone who's been mistaken for a spiritual trophy and has to play the part. George Takei has lucked into his role as human tchotchke and considers it glory.