You can eat steak and tofu. 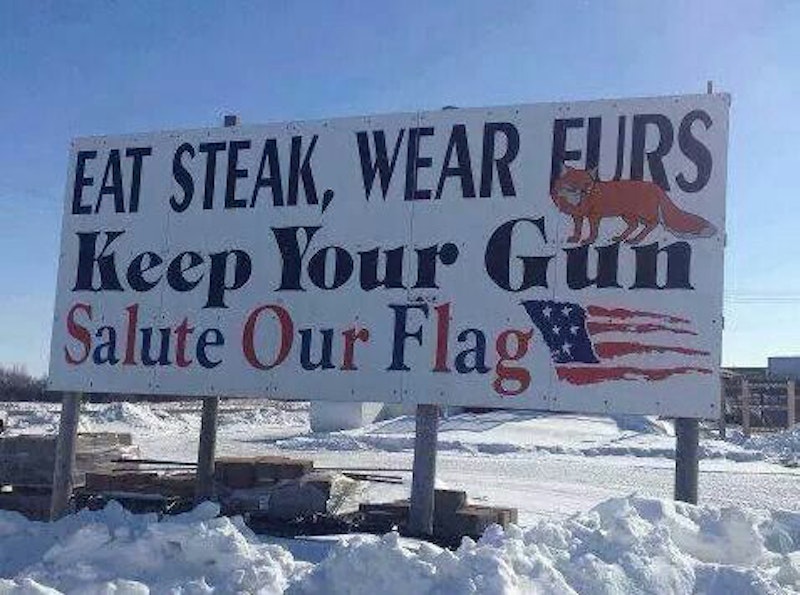 While driving down a Minnesota highway I notice a semi-trailer parked in a field. Painted sky blue and adorned with both an American flag and an eagle in attack position—talons extended—the side of the truck holds a message. It reads:

“Eat your steak. Wear your furs. It's the American way.”

I often think of a lyric in John Mayer’s song “Belief” whenever I come across messages like this. He sings, "Is there anyone who ever remembers changing their mind from the paint on a sign?" Not surprisingly, the people most likely to be impacted by messages like this are already in agreement. But, what that impact might be poses an interesting question.

The authors apparently feel their freedom to eat a steak or wear animal skin is emblematic of freedom in general. They’ve chosen to co-opt the meaning of "American."

Signs like these, however, underscore unnecessary divisions rather than illustrate ideals. Any group claiming "American" for dubious purposes doesn't help build unity, peace, or prosperity. These messages convince no one on the "other side," but do reinforce a subtle "us" versus "them" mentality. As I think about this sign and its message, I try to find a way to relate. I don't like a lot of meat, but do enjoy a good steak occasionally. I don't want to wear fur—though I did own a fur coat at one time, handed down from my grandmother. Still I know this sign isn't for me: I don't believe an insidious, deliberate plot is afoot to remove my freedoms.

Then again, why would I? I'm part of a group with economic and social dominance. I'm white, college-educated, and live in the suburbs. When new laws, regulations, or social norms emerge they rarely have a direct, detrimental effect on my day-to-day life. I adapt easily because adaptation is easier than protest. When I act it's because of empathy for others, not self-preservation.

It's that same empathy that gives me pause now. When people make signs like these, when they do more than talk with neighbors at kids’ baseball games about the messed-up nature of this or that new development, that signals something. It says, "I'm afraid." And that's not a "they" problem; it's a "we" problem.

Most issues we face are complex with economic, social, political, moral, and health implications. A billboard, a tweet, a Facebook post, or a 30-second sound bite won’t give us the information we need to make smart choices about the foods we eat or clothes we wear, let alone much more serious matters. We have to invest energy to investigate, and that’s not easy. It’s particularly difficult in a world where tweets and sound bites, by their very nature, keep us distracted, incite emotion, and produce the illusion of knowledge where none exists.

Tristan Harris, former Google designer and founder of the Center for Humane Technology spoke on the 2017 TED stage. He said, “Outrage is a really good way… of getting your attention, because we don't choose outrage. It happens to us.” This is a thorny problem. But as a first step, we could stop reinforcing the divisions between us both online and on the side of the road.

And to that end, I suggest a different message for the semi-trailer billboard of the future:

“Eat your steak or your tofu. Wear your furs or your organic cotton. It's the American way to support freedom of both choice and information.”