Catch me if you can, food police. 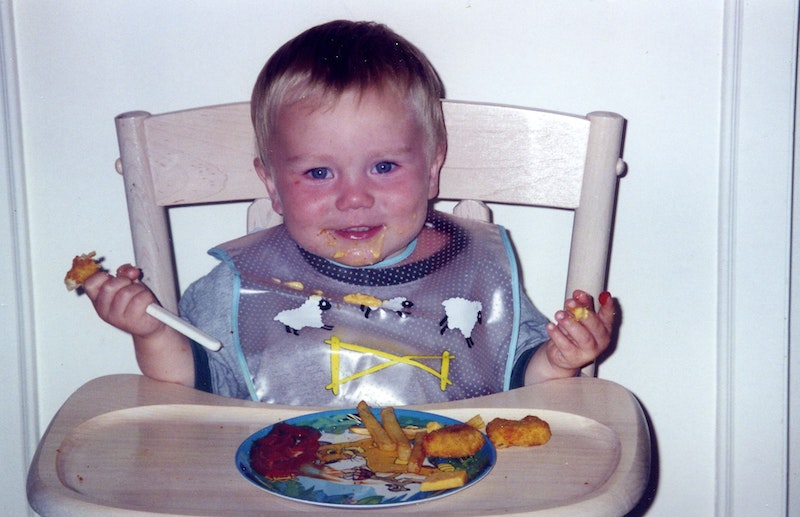 How long before the statute of limitations runs out for feeding your child greasy frozen food? Given the government-sanctioned restrictions on freedom of choice in New York City, I wouldn’t be surprised if my wife and I are still culpable for this offense. Look at the picture above of our son Booker—in 1996, happy as a clam eating chicken nuggets and fries, with plenty of sugar-infused ketchup on the side—and you get the gist. Not that I have bad dreams of some city official—today’s approximation of a truant officer or dog catcher—banging down our door in Baltimore and applying the cuffs, but it gives me the willies thinking about how American culture has changed in less than two decades. You hear stories about child services kidnappings every day.

Calorie counts on restaurant offerings are okay—I ignore them—and the days of complaining about smoking bans in bars seem quaint, as if anyone was going to stop the movement to treat puffers like pariahs. As Booker and his brother Nicky are now adults, 21 and 22 respectively, and make their own culinary decisions, the food police can’t nab us, but I wonder how the parents of toddlers cope with the new rules. I’m grateful there was no nearby Whole Foods in Tribeca when we lived there—it was Food Emporium on Greenwich St. all the time—since God knows what organic this or that exorbitantly-priced baby food would’ve made it into the refrigerator. When the boys were small, their diet wasn’t all that different from mine back in the late-50s: quick over-cooked frozen fish sticks, tater tots, chicken, lots of visits to the McDonald’s down the street, sweetened cereals and plenty of Coke, Sprite and Pepsi. True, juice boxes were a staple, but I’ve no idea how much sugar they contain and if they’re now on a list of banned foods.

Like most kids, Nicky and Booker were picky eaters. Nick hated the smell of tuna fish sandwiches (which still baffles me) and explained his aversion to milk by claiming he was lactose intolerant, “except for ice cream.” Booker had a broader palate—he loved any kind of nasty Campbell’s soup, and drooled when gravy was served—but had a mantra that carries to this day: “No mustard or pickles.” Naturally, peanut butter and jelly sandwiches were a hit—frowned-upon Skippy’s was the spread of choice—as were hot dogs from street vendors, Swanson’s TV dinners, or pizza from a scuzzy Ray’s around the corner. And arrest me now: we allowed the kids to eat candy bars.

Has the regressive tax on “sugary drinks” taken effect yet in New York City? I can’t follow the back-and-forth, but it’s certainly punishment for those residents who live on very tight budgets. The inequity of that proposed tax is staggering: if the government’s going to dun you a couple of cents for buying a Coke, why not the same treatment for Starbucks? After all, just this morning I was on line to buy a black iced coffee, and the hefty woman ahead of me ordered a “vente” caramel frappuccino with extra whipped cream, essentially an a.m. dessert that had to bust her recommended calorie count for the day. Likewise, if plebian soft drinks are taxed, what about Ben & Jerry’s ice cream? I’m not a conspiracy nut (save JFK’s assassination), but is it a stretch that both Starbucks and Ben & Jerry’s will forever be exempt because of the owner’s liberal politics?