A lousy baseball season winds down. 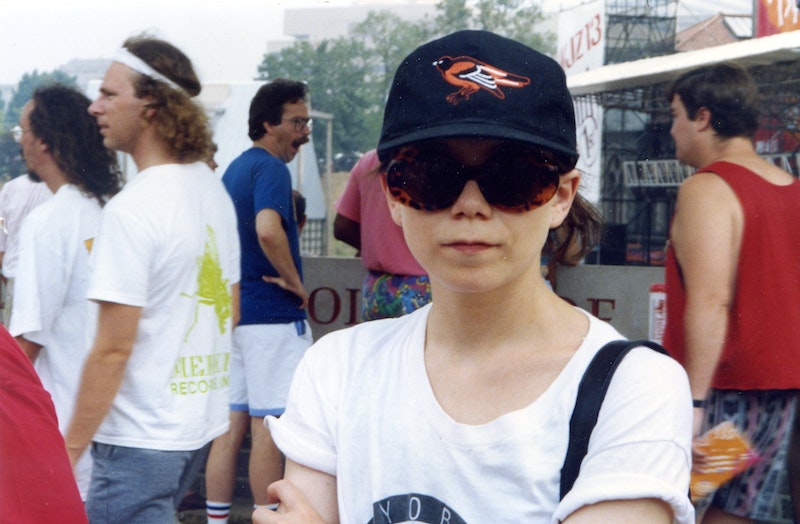 No idea at all when this photo of my wife Melissa was snapped (pre-iPhone), but the suspicion is that it was back when the Orioles were really, really crummy and the crowds at Camden Yards were sparse, save for Opening Day and when the Red Sox or Yankees came to town. Could’ve been from a trip down from NYC to visit friends in Baltimore, or maybe after we moved to the city in 2003. It doesn’t really matter, at least this season, since Melissa’s expression conveys what a lot of O’s fans feel with Buck Showalter’s team treading water, a longshot to snag one of the American League wild cards.

The Orioles’ fate is, unlike most locals (including Melissa and our son Nicky), of little consequence to this Boston fan. (Although I’m curious how the O’s will replace free agents Chris Davis and Matt Wieters; considering how averse GM Dan Duquette and owner Peter Angelos are to big splashes in the off-season, it’s not promising.) Jiminy, what a hash Sox owner John Henry (evasive as ever, but seemingly more disinterested in the franchise as the glow of three World Series titles under his regime wears off) and his minions have made of the team this year. Sure, there was improbable WS win two years ago, sandwiched between two cellar finishes and yet another when the games stop for also-rans in five weeks or so.

There was some positive news earlier this month: over-his-head GM Ben Cherington was shown the door in favor of Dave Dombrowski, his recently-fired counterpart in Detroit. My son Booker, who doesn’t really trust the decision-making of old-school executives over the age of 35 (with the exception of Billy Beane), is skeptical. I’ve got an open mind, especially if Dombrowski ditches the roster-clogging Hanley Ramirez, re-builds a disastrous bullpen and acquires a top-shelf pitcher via free agency or a trade. I’m discounting the reports that Ramirez, one of the worst fielders in baseball, will make the switch to first base: the bet here is that Dombrowski is just auditioning the lug for a fire-sale trade.

The big news out of Boston this week was the shocking dismissal of longtime Sox broadcaster Don Orsillo, who, along with Jerry Remy, is one of the best, and funniest, in the business. (Booker and I are biased, of course, but with the MLB cable package that shows every game that’s playing, we’ve seen horrible combos for other teams.) The ostensible reason for the move was that ratings on NESN, the Sox station that Henry has an 80 percent stake in, were down, so someone had to take the fall. In fact, the numbers would be worse without the Orsillo/Remy tandem, which entertains the audience even when the team stinks worse than the urinals at Fenway Park. It’s said that a NESN higher-up didn’t care for Orsillo, but I think Henry’s insufferable minority partner Tom Werner (who has a TV background) was responsible.

I’ll leave to my son to sort out the nitty-gritty of the Sox’s plans for 2016—frankly, at 21, and steeped in advanced sabermetrics, I’d trust him more than Henry and co. at this point—and end on a note that both Sox and O’s fans can agree on: the hope that the Yankees, currently the wild card leader, suffer a month-long losing streak and are shut out of October baseball. It’ll make the playoffs so much more palatable.