Why Is Muppet Violence Funny?

Because we've decided it is. 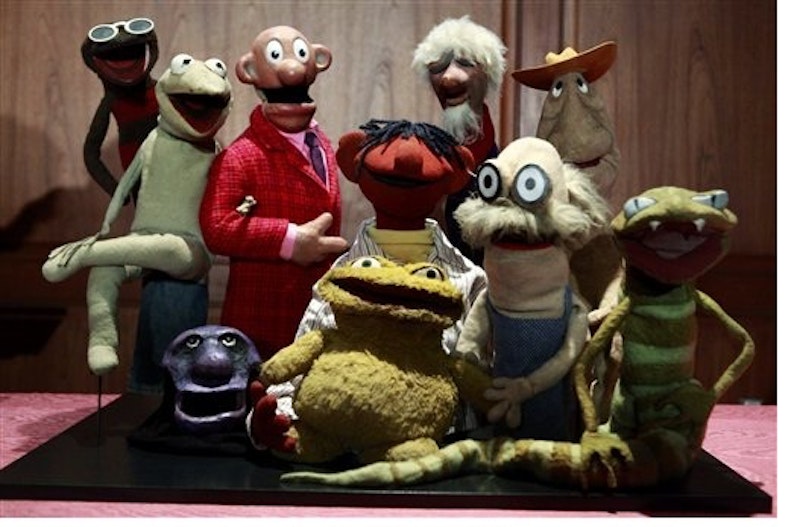 This was the reaction of many to my piece earlier this week at New Republic in which I wrote about the fact that Miss Piggy could be seen as a female domestic abuser. As  author Tiffany Reisz told me on Twitter, "Muppets aren't human, they're muppets, and don't, experience pain/suffering/gravity/logic the way humans do. You can literally twist them into pretzels." Jonathan Chait didn't even bother to make an argument; he just pointed and laughed. Muppets; who can take them seriously?

Muppets aren't real; as I said in the original piece, "This is a Muppet pig and a Muppet frog we're talking about;" no actual puppets were harmed when Piggy karate-chopped the frog. But then, no one is actually ever harmed or raped on Game of Thrones either. Miss Piggy is no more or less real than Hamlet. It's true Kermit doesn't experience any real pain or suffering, but neither do the Jews in the death camps in Schindler's List, or the slaves in 12 Years a Slave. Representations are representations. Art isn't life; you can't torture fictions.

The issue isn't that muppets are fake, because all fictions are fake. Instead, it’s that the muppets treat violence as a joke. Schindler's List purports to be connected to some version of reality and reference, if not to reproduce real trauma. The Muppets is a comedy or a cartoon. It's meant to be taken lightly and laughed at. Miss Piggy hits Kermit and he flies off the stage, but next scene he's back, waving his arms, with no contusions. Gonzo gets shot out of a canon, but he's back ready to have a giant weight dropped on him as soon as he can bend his beak into shape. The show itself signals viewers that its violence is not to be taken seriously, because its violence is treated as a joke, and has no consequences.

In contrast, if you can stomach it, try watching Peter Jackson's 1989 Meet the Feebles. The film features muppet characters—but the fact that muppets don't experience pain, gravity or logic doesn't undercut the film's violence, gore or grossness. On the contrary, Meet the Feebles is probably the single most disturbing movie I've ever seen. Watching cuddly critters being blown away in a welter of blood, or seeing their faces ooze pus from the running sores of a venereal disease, or watching a kitty-cat fellate a giant walrus… it's all somehow exponentially more upsetting than watching even the most ghoulish horror film. I'd watch Hostel or Funny Games again in a second, but even 25 years later, the thought of re-watching Meet the Feebles makes me queasy.

Meet the Feebles is so horrifying precisely because it violates conventions. Muppets are supposed to be funny and cute; giving them blood and guts and viscera makes you see violence where violence shouldn't be. It's not so much the gore that's disturbing, but the violation of genre conventions which forces you to suddenly pay attention to the bloody bits you'd been cued to ignore.

This doesn't just happen with Muppets. Consider James Bond films, or really any action-adventure spy thriller, in which the good guy zips around mowing the enemy down by the dozens. Or think about The Avengers, in which large sections of New York are destroyed, and the death toll has to be in the hundreds at a bare minimum. No dead bodies are shown, though, and no one sees the film as particularly bloodthirsty. But Quentin Tarantino kills 10 people or so in Reservoir Dogs, and he's perceived as a hideously violent filmmaker. Murdering someone onscreen is fine, as long as you don't make the audience think about it too hard.

This isn't to say that all fictional violence should force you to think about it too hard. Everyone can agree that Meet the Feebles shouldn’t be some sort of entertainment standard. And who wants to deny their child the pleasure of seeing Gonzo shot out of that canon, or the Coyote falling off the cliff? Slapstick is funny, and no one is really hurt.

Still, if fiction doesn't actually harm anyone, it tells us something about the real world, in which, sometimes, people are harmed. The Muppets and Meet the Feebles together show that violence is only disturbing when it's labeled as disturbing. Conventions, genres, and social cues tell us when violence is supposed to matter, and when it's not. So, for example, when women are raped by strangers, we consider that a horrible crime; when women are raped by their spouses, it is often invisible; when men are raped in prison, it's a joke. Or again we see domestic violence against women as serious, dangerous, and worthy of comment, while domestic violence against men is funny or shrugged away.

You shouldn't feel guilty for giggling at those Piggy/Kermit clips. But it's worth thinking about how only certain violence counts as violence, and about which conventions we're in thrall to when we flinch, or when we don't.