Towards an ethics of selfies. 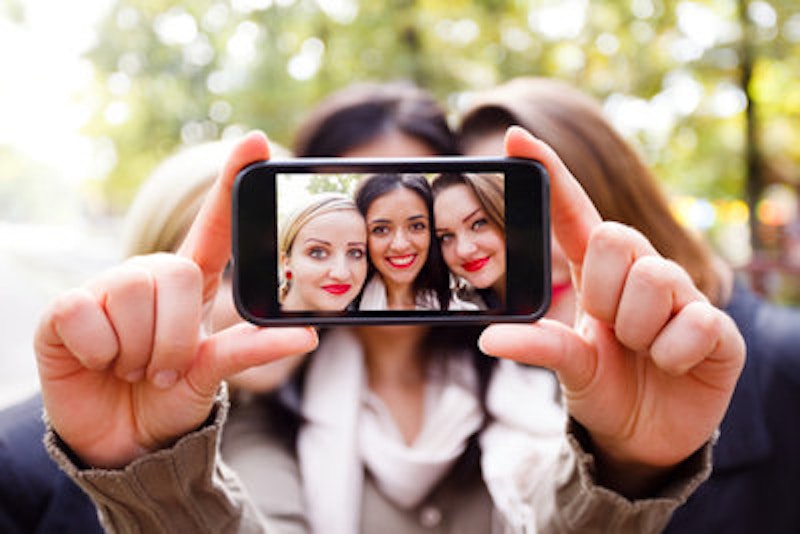 Thanksgiving was held at my father’s house in Baltimore. I snapped some pictures with my iPhone, posting them on Facebook to mark the occasion: the aunts and uncles on my father’s side, with my grandmother; my aunt with her first-born grandson; a random, un-posed assemblage of attendees who didn’t realize they were being photographed. There’re also images of the celebration at my mother’s house, earlier that day: the dining room table, cleared and set; my step-father and her in close-up. Her reaction to all of it was immediate: “It’s nice, but honey, you’re not in any of these pictures.”

This was true. No one had asked me to take a photograph with them, and I hadn’t extended an offer. Maybe it was some combination of ego, anti-vanity, and indifference; I don’t think of myself as especially handsome and find most selfie culture gauche. It’s a complicated thing, because I want others to care about what I share on my Facebook wall—like most people, presumably—but paradoxically I’m rarely inclined to shoot and post the selfies that inevitably collect the greatest number of “Likes.” Thinking about all of this, it occurred to me that, without realizing it, I’d cobbled together a vague, personal “ethics of digital photography.”

Pictures of Nature, Signs, Random Objects That Seem Interesting: Upon acquiring my first smart phone I was fairly indiscriminate about this, which was likely a symptom of excitement at the prospect of easy, 24/7 photography. There comes a point, though, when no one needs 20 pictures of moon phases or shadowy doorways or snow-caked fields. The norm now is to capture the drastic or unusual, and to only share if I feel especially compelled.

Pictures of Myself, Alone: I’ve done this just a few times on impulse. Right now, my Facebook profile shot features the boy and me—and likely won’t change until the next time I see him.

Pictures of Myself, With Close Friends and Family: On this one I’m a bit torn; it depends on the circumstances. Consider my close, local friends, who I see every few months: there’s no reason for us to take pictures together any more often than every few years, unless it’s someone else’s idea of an afterthought. Then consider the friends I’m just getting back into contact with, or the friends who live far away. That’s different, because the unspoken assumption is that while we may see one another again in the near future, it’s a roll of the dice. So when Sarah came out from New Mexico, my cousin Kevin dropped in from Hawaii, and when I caught up with Elitsa in Chestertown, taking and posting couple shots felt necessary as a historical marker, even as those shots didn’t actually define the experience of being reunited.

Pictures of Myself with Personal Heroes I Meet In Real Life: In the past year, I’ve been fortunate enough to meet and converse with musicians I’ve long admired in a variety of settings: at Ende Tymes, at a Black Pus show, at Be Free Floating. The urge for a photograph simmered, but I shoved it away to live in the moment. How wonderful, to talk, compare notes, commiserate about difficulties encountered to that very point in time, without the forced artificiality of a photograph to commemorate it. Now and again a friend will post a picture of him or herself with a person of note. I’ll experience a pang of admiration and be thrilled that it exists, until I consider the image from the celebrity or quasi-celebrity’s perspective, which is: people probably stop that person for pictures all day long, and the person very patiently and dutifully acquiesces before forgetting about the encounter, which must be deeply soul-destroying in an insidious way.