Bill Burr Is a Tortured Soul

That's why I'm Sorry You Feel That Way is funny. 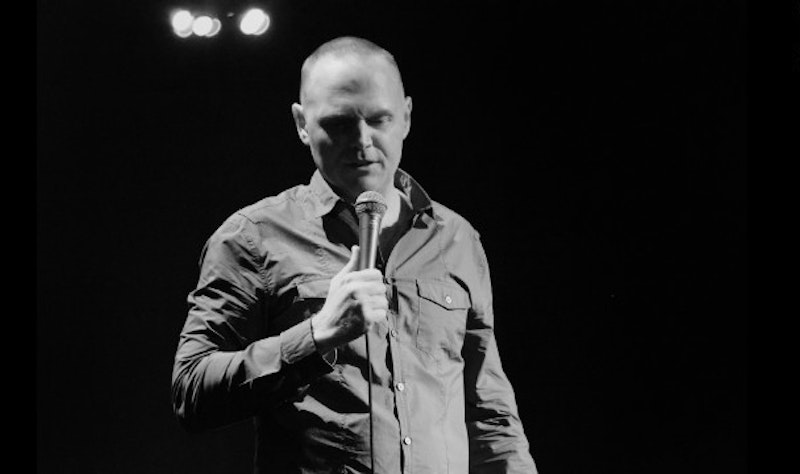 Bill Burr is perpetually irate. That's his thing, and as he hops about with rage, he acts out the anger of the white man who watches his order dying around him. It used to be that the blacks were coming up, but now he's worked out an accommodation. What gets him are the weaklings. Strength isn't taught any more. You're supposed to be a pussy, and he despises this outcome, despises it from the point of view of someone who is no tower of strength or claims to be. He's a scrawny, yowling little creature, and he knows what it's like to be scared. But you stand against it, that's all. You despise the fear and hold it in so that everyone else can get on with being strong. This plane may be coming down; don't scare anybody.

His latest concert show is called I'm Sorry You Feel That Way. It's in black and white, and he's as funny as ever. Of course, I like him every time out; others may prefer small doses. The little bald man from Irish Boston hates “the Church” (by which he includes Southern fundamentalism), and he hates his girlfriend—sorry, wife. There has always been a falsetto-voiced creature who had some claim to managing his existence. Now she's lodged on his neck. He knows life is over when you have kids; it's burdened, at least, if you have one of these women. But he doesn't hate her that much. He's an understanding sort, and he talks out his dilemmas with us. He does it loudly, but in the end he's reconciled.

For somebody who's noisy and working class and male, Bill Burr is adept at seeing from a distance. Irony is how he experiences the world. When he gets down to brass tacks, he's looking at them as if they were very small indeed. What he hates about racism, and anti-racism, is the shit you have to wait out, the bits and routines that you know to death and that will never go away. They'll be sitting there in your ear, like your damn girlfriend—sorry, wife. You are your own person, an independent being, only if you know that life is wired this way, wired toward stupidity. Even smartness comes out as dumbness, and it gets talked at you and becomes a blight. After all, yes, racism is bad, and you shouldn't drink yourself to death. But then there's the repellent nah-nah-nah of lecturing. Horrible, but not wrong. You have to listen to it. But you can't let it lord itself over you. You find that awkward jigsaw line of freedom where a soul can exist.

The soul isn't happy about this. The tortured thing has to yelp out the ground rules that justify contorting itself this way. It has to yelp them out over and over. It yips about rage and justice, and it indulges wild dreams in which any humanitarian impulse gets flipped around into a chance for the ego to swagger. Adopt a kid? Get one who's older than the kids your friends have been bringing up. Then you can tell your friends how they have no idea what's ahead of them. This thought would never have occurred to me, so I can't classify it under “funny because it's true.” It's funny because it's him. That bit is the voice of a man's soul as reality bites deep into his psychic flesh. That's good comedy, and thank you, Bill Burr.