Notes From the Tour Van

Trekking through the southwest. 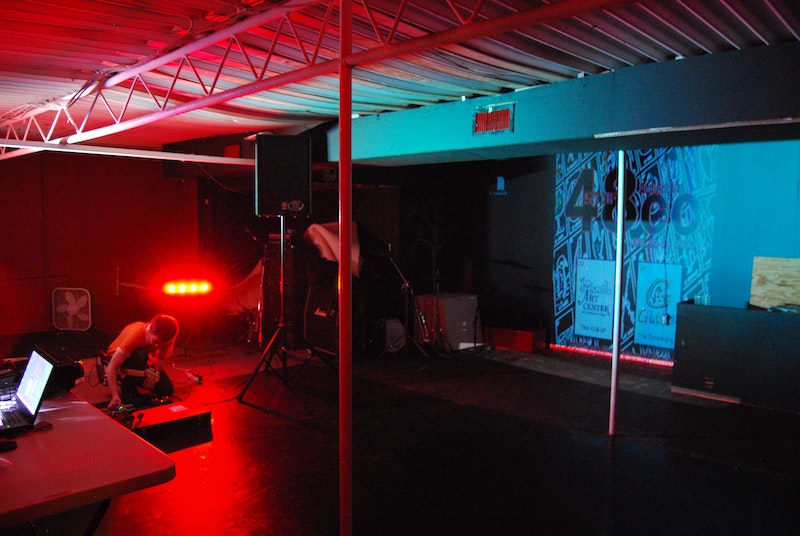 There’s not much you can observe about touring America that hasn’t already been pulverized to bits. Modest Mouse made a concept album about the cancerous spread of strip malls, shopping centers, and omnipresent logos and brands—10 years ago, with The Lonesome Crowded West. What’s there to say in 2012, except that that our country has gotten even more mall-fucked, as Isaac Brock would say. Touring is still an experience you can’t get any other way, and for someone with a short attention span, a fetish for novelty, and a healthy curiosity, it’s the most enjoyable way to work and keep yourself busy. It’s a constant stream of new places, meeting people, first impressions, expectations dashed, met, and exceeded. Moments (good and bad) from a recent tour of the Southwest:

—Walking around Westchester in overcast afternoon LA and realizing the Missing Persons were right.

—Seeing Rock of Ages with relatives and marinating in its pure cheese. I enjoyed it immensely despite hating all the bands it celebrates—Poison, Journey, Night Ranger, REO Speedwagon, Foreigner, Extreme, etc. I want more musicals, but what if the grunge/alt rock version is next? You know it is.

—Seeing the Arclight in Hollywood for the first time and pining for equally opulent movie houses to pop up on the East Coast.

—Getting hit on by a 45-year-old former Valley Girl, current Valley Ma’am who looked like Debbie Harry stuck in a time warp.

—Getting hit on by methheads in a Louisiana truck stop bathroom.

—Passing through a police checkpoint very close to the border near El Paso and having drug dogs sniff down the car. Adrenaline spiked, to the say the least.

—Playing at Long Wongs in Tempe AZ, realizing we had to leave immediately after the show and drive nonstop for 15 hours to make our show the next night in Austin.

—Buying this sweet ceramic paisley frog ashtray/keyholder near El Paso. It was accidentally thrown away or lost not long after. I will find you again someday, froggy.

—You never expect to play with a band you’ll love, but we were lucky enough to be on the same bill as Seattle’s The Hoot Hoots, your new favorite band. It’s always inspiring to see a great band win over a crowd and hold them in the palm of their hand.

—Listening to Nirvana’s MTV Unplugged in New York while driving through the desert in Texas and looking at all the beautiful foothills.

—Driving into coastal Corpus Christi right as the sun was setting. Seeing how derelict and rough the city was, watching multiple people throw Whataburger cups out their car windows.

—Torchys Tacos in Austin. Me after facing a brisket and fried avocado taco. “Damn tacos buenos.” When you can’t get good Mexican anywhere near Baltimore (Holy Frijoles doesn’t count, it’s the methadone of Mexican food), places like Torchys and La Playa in Corpus Christi make me want to jump up and down. After Torchys, I did, and almost lost the brisket.

—Tri-tip at a barbeque in LA. Again, my face when.

—Finally eating at In-N-Out Burger for the first time after waiting almost eight years. It was inevitable but I was pretty disappointed. You hear reports from regulars that it’s as if they sprinkle crack into the animal sauce—the Double-Double only made me think of what a better Rofo burger could be. Soggy as fuck fries, as well.

—Playing to more roaches than humans in Austin at the Club 1808 (on the only block in all of Austin that resembles Baltimore’s Greenmount Ave, albeit friendlier).

—Eating the best barbeque of my life at Howard’s in Corpus Christi and being treated like a good ole boy.

—Looking for Sherriff Arpaio’s squad car in Phoenix and leaving the city disappointed I didn’t get the chance to spit on it.

—Getting stuck in traffic during rush hour in Houston and watching with horror as five or six guards drove over a large grassy median downhill and onto a marginally less busy service road.

—Asking to use the bathroom in a smelly Chinese restaurant in Tennessee and the staff telling me to fuck off.

—Meeting fans and some great people: Mike from New York, Mischa from Austin, Julia and her parents from Corpus Christi, the Hoot Hoots, and the metalhead who tried to sell me liquid LSD.

—Not getting to play or visit New Orleans because of a mismanaged route.

—Playing at a straight edge venue on the water in Corpus Christi and making a baby in the audience laugh.

—Driving through a sandstorm near Palm Desert while listening to Earth’s Hibernaculum. What a perfect way to listen to that record: a spaghetti western drone never sounded so appropriate.

—Sleeping and christening an empty house in Corpus Christi and calming the ghosts with Everybody Knows This is Nowhere, Song Cycle, the first Big Star record, and U.F.O.’s Obsession. They didn’t bother us after that.

—Throwing up behind a Sheetz from exhaustion.

—Driving 27 hours in two days, and traveling all through the day, the night, and into the next morning, to make a Sunday show at the Ottobar in Baltimore. Once the sun came up around five a.m., I felt truly zombified.

—Waffle House. That is all.

—Seeing Baltimore on the horizon and arriving home at seven in the morning, blazing through downtown against no traffic, and finally collapsing into bed.

—Playing before Nick Zammuto’s new band (Zammuto) hours later at the Ottobar to friends and family.