For all the quick-paced spectacular transmogrifications the animation shows us, The Midnight Gospel simply doesn’t have enough going on. 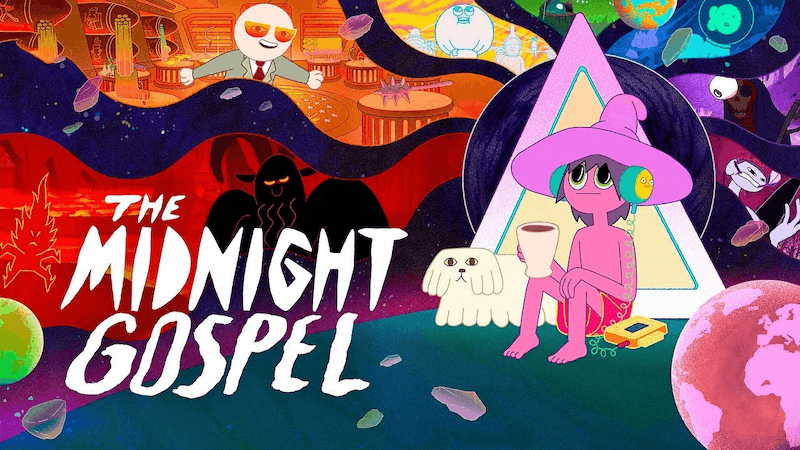 It’s no accident that Netflix released The Midnight Gospel on April 20. An animated show by Pendleton Ward, creator of Adventure Time, it takes segments of actor-comic Duncan Trussell’s podcast The Duncan Trussell Family Hour and fits them into a weird and vaguely science-fictional setting. Discussions about occultism, meditation and Buddhism are accompanied by rudimentary quest-plots and bright colorful cartoons. Fascinated with ideas of consciousness and magic, The Midnight Gospel plays with levels of reality and the art frequently refers to occult and psychedelic imagery.

So of course the show began streaming on 4/20. Know your audience.

The narrative follows Clancy, a young man who recently moved to a surreal land called the Chromatic Ribbon. He’s got a small home that includes a universe simulator, a talking computer that can create worlds inside itself. When Clancy sticks his head into the simulator, his consciousness takes the form of an avatar he selects. Clancy wanders the simulated worlds, finding interview subjects and usually accompanies them on some kind of quest as they talk. Over the course of the first season of eight half-hour episodes, we learn a bit about Clancy, as well as the simulator and the Chromatic Ribbon, and get a kind of narrative arc about Clancy’s development as a person.

The interviews Clancy conducts inside the simulator are clips from Trussell’s podcast—Trussell’s also the voice of Clancy—and the disjunction between the adventures and the pre-recorded conversation give the show its distinctive feel. As Clancy and his subject wander haunted forests and underground hellscapes the room tone of the audio never changes, the discussion loose and unstressed and always sounding as though recorded in a studio.

The animation’s choppy, an unfortunate choice that feels like an affectation, if one you get used to over time. But the visual designs are engaging: cartoony, flat, brightly-colored shapes, all of them mutable, shifting around with little warning as though Ward was transcribing his dreams. There are an increasing variety of graphic approaches as the series goes along, and every episode gives us a different world, all of them filled with different symbols. If the imagery were realistic it would be overwhelming and distract from the conversations—though that might be good.

The great problem with the show is that the podcast interviews aren’t especially profound. They’re about profound subjects, life and death and what comes after, and magic and drugs and the nature of consciousness. But they’re handled in the most banal way possible. I don’t know what Trussell’s podcast is like on its own, but in The Midnight Gospel Clancy isn’t a penetrating interviewer, doesn’t bring out unexpected insights, and isn’t engaging as a personality.

As a character on his own, Clancy’s not particularly intelligent, and irresponsible to the point of viciousness. At one point he almost destroys the simulator because he’s not only too lazy to read a manual, but too uninterested in the world outside his head to do basic maintenance when the machine itself tells him it’s necessary. Most of the conversations Clancy has have to do with himself; with the nature of ego, with how to live inside his own head.

You also notice the strange shape of the universe simulator he enters, a roughly teardrop-shaped orifice into which he sticks his head. A number of commentators have seen it as a vaginal image, Clancy returning to the womb, but after a few episodes it seems more like a pair of buttocks: by proxy, Clancy’s sticking his head up his ass.

Having a more consistent satire of Clancy would’ve been a good idea. Ward’s inventive in finding ways to illustrate the themes of the various discussions—a talk about the effect of drugs and escaping the body accompanies a running battle against zombies, for instance. A talk about the healing power of forgiveness is illustrated by a quest through a dark medieval fantasy world. If Ward’s trying to bring out what he finds interesting in the show, he partially succeeds: the contrast of talk and adventure works.

But Ward leans too much on traditional psychedelic imagery—what you find in old underground comix and late-1960s music posters. That style tried to capture the experience of altered consciousness by creating a new visual vocabulary. It was new in a way The Midnight Gospel isn’t; Ward remixes images from kids’ cartoons, fantasy paperbacks, various occult traditions and any number of other places, but it doesn’t feel like a creative or wholly individual attempt to capture a psychedelic state.

That may be too much to ask for. The animation is fast-paced and unpredictable, and does generate some wonderful moments. But the story doesn’t hold up; the show doesn’t look critically at the podcast at its heart, and the main character’s actively uninteresting. There’s an absence of wisdom, so what should be an emotional moment at the end of the season is less powerful than it would’ve been in its original form—the show gives Trussell’s interview a narrative context that makes it unreal and manipulative. For all the quick-paced spectacular transmogrifications the animation shows us, The Midnight Gospel simply doesn’t have enough going on.