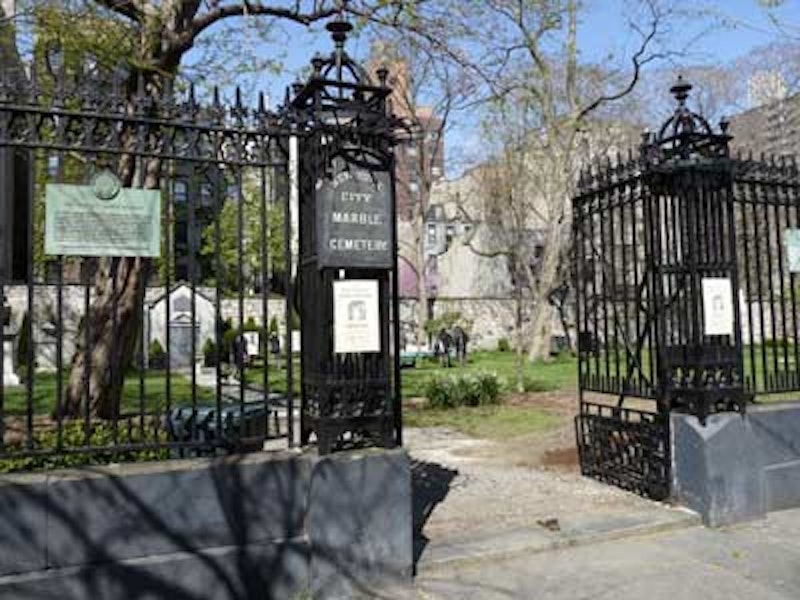 The “other” local Marble cemetery is located via a more conventional entranceway on East 2nd Street between 1st and 2nd Avenues, though the New York City Marble Cemetery (as opposed to the New York Marble Cemetery entered via 2nd Avenue) is open to the public less frequently than the NYMC. It’s interesting that the NYMC literature I acquired on my visit claims that Perkins Nichols built both cemeteries, but that NYCMC was “founded” in 1831 by a consortium consisting of wealthy New Yorkers Evert Bancker, Samuel Whittemore, Garret Storm, Henry Booraem and Thomas A. Emmet, without mentioning Nichols’ name. Land was purchased from a Samuel Cowdrey.

Apparently in that now-remote era, 2nd Avenue was due to become a fashionable road lined on both sides with expensive housing and expensive emporia. Instead, an el was eventually built on the avenue north of East 23rd Street and 2nd Avenue was thrown into shadows punctuated by flaming sparks and belching smoke from the overhead tracks. Fifth Avenue, leading north from Washington Square, stole the glory. By the 1890s the NYCMC was faced by tenement housing on East 2nd Street and many of the families with members interred here decided to reinter them upstate, away from the hoi polloi. However, others held firm and instituted a trust that has helped maintain the NYCMC to this day. At length, it was declared a NYC Landmark in 1969. 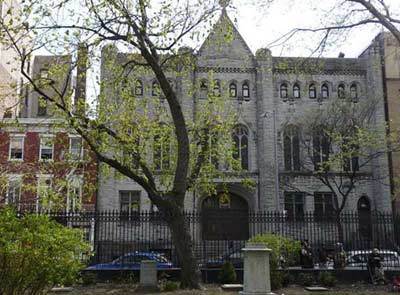 The NYCMC is faced on 59 East 2nd Street by the Romanesque Russian Orthodox Cathedral of Holy Virgin Protection, constructed in 1867 as Mt. Olivet Memorial Church, constructed by Joshua Cady, the architect behind the uptown Museum of Natural History and the first Metropolitan Opera House at Broadway and West 39th, now demolished. The Russian Orthodox Church obtained the building in 1943.

The NYCMC is also under the baleful glance of #67 East 2nd (the 6-story walkup in the center) where, NY Songlines‘ Jim Naureckas reports, domestic terrorist Sam Melville made his hideout in 1969 after bombing the US Draft Induction Center on Whitehall Street, Criminal Courts Building at 100 Centre Street, the RCA Building, the General Motors Building and the Chase Manhattan Bank and other places, all without killing anyone, not for lack of trying. He was sent to upstate Attica and died in the prison riots there in September 1971, which he helped instigate. 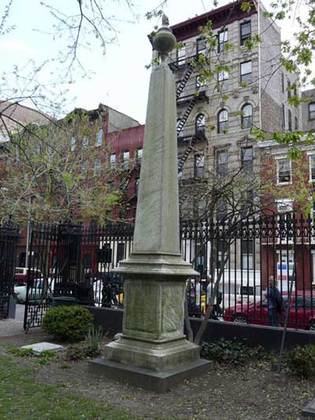 You can’t miss Stephen Allen (1767-1852), the 55th NYC mayor from 1821 to 1824 and a sailmaking entrepreneur before entering politics; his vault is marked by a large tapering shaft topped by a globe just to the left of the cemetery entrance on East 2nd Street. Allen street in the Lower East Side is named for him.

After leaving office, Allen headed a committee for finding new sources of drinkable water for the city, which led to the construction of the Croton Aqueduct. He became a state senator and raised funds for the construction of the first Tammany Hall on West 14th Street. He died tragically aboard the steamship Henry Clay in 1852 during an ill-advised race with another vessel, during which it caught fire and crashed on the Hudson River. 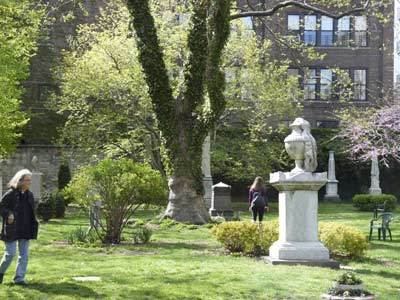 Much like the New York Marble Cemetery, the NYCMC burials are in vaults about ten feet below ground and are accessed by opening stone slabs buried beneath. Unlike the NYMC, the NYCMC faces East 2nd on one side and thus there isn’t a stone wall for marble monuments to be displayed. Thus you will see them arrayed on the cemetery field, and many families have chosen to erect substantial monuments.

This cemetery in the past was the final  resting place of President James Monroe from his death in 1831 until  1858, when the State of Virginia requested his remains be reburied in Richmond. The cemetery can claim three NYC mayors, Marinus Willett (from 1807-1808), Isaac Varian (1849-1851) and Stephen Allen (see below). NYC Public Library founder James Lenox (of Lenox Avenue fame); John Lloyd Stephens, archeologist and Mayan expert; James Henry Roosevelt, founder of Roosevelt Hospital; and several other Roosevelt family members, are buried in NYCMC. 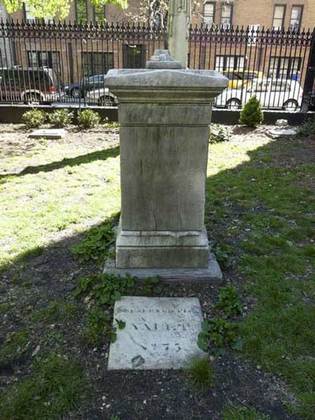 Preserved Fish (1766-1846), was a prominent shipping merchant. He was a member of the prominent political Fish family in New York, whose perhaps most famous member was Hamilton Fish (1806-1893) who became the 16th Governor of New York, a United States Senator and United States Secretary of State. Preserved Fish, however, was born in Portsmouth, RI, son of a father who gave him his name. It is not a pun or a play on words, as it is pronounced in three syllables, “pre-SER-vid” and implies “preserved in God’s sight or God’s grace.”  His monument can be found on the west end, or 2nd Avenue end, of the cemetery in the middle.

Kevin Walsh is the webmaster of the award-winning website Forgotten NY,  and the author of the books Forgotten New York and also, with the Greater Astoria Historical Society, Forgotten Queens.