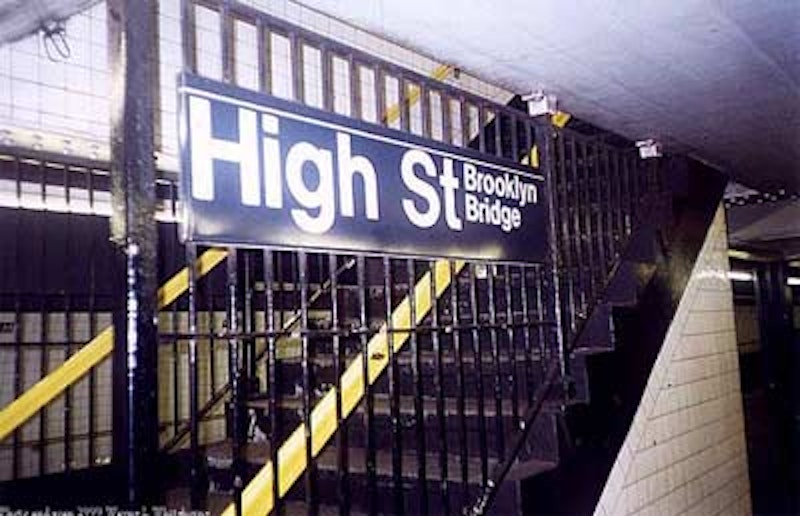 When it was opened on February 11th, 1933 as part of the new Independent Subway System, the High Street station on today’s A and C lines, the first or last station in Brooklyn depending on your direction, was indeed located on High Street. When the east-west street was laid out in the 1820s it ran continuously from Fulton Street, which wound circuitously to the Fulton Ferry on the East River, east to Navy Street, which bordered then and now on the Brooklyn Navy Yard. However, no east-west street in downtown Brooklyn has been sacrificed to real estate and transit concerns more than High Street. Its first interruption came in the mid-1900s, the 20th Century’s first decade, when a section between Jay and Bridge Streets was demapped and became part of the Brooklyn plaza of the Manhattan Bridge.

In the 1940s and 1950s, all of High Street between Bridge and Navy Streets came off the map, demolished to make way for the Brooklyn-Queens Expressway and the Farragut Houses. Today, only one block of High Street remains between Pearl and Jay.

Toward its western end, High Street served as a terminus for el trains traveling to and from Manhattan via the Brooklyn Bridge at the massive Sands Street terminal shed. As early as the 1930s, a large park was under construction between Fulton and Washington, taking out High Street’s western end. 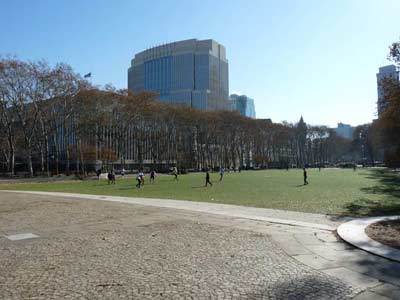 Downtown Brooklyn’s aspect utterly changed, and Fulton Street lost much of its old personality, when entire blocks just east of it were razed between 1950 and 1960 to make way for Samuel Parkes Cadman Plaza, named for a Methodist minister and leader of the Central Congregational Church in Brooklyn from 1901 till his death. The Plaza served to add a lot of green space to downtown Brooklyn, which had been dominated by the Fulton Street El until 1942.

The soccer pitch seen here is the most “parklike” section of Cadman Plaza, and sits just south of one of the plaza’s major memorial works: The Brooklyn War Memorial. 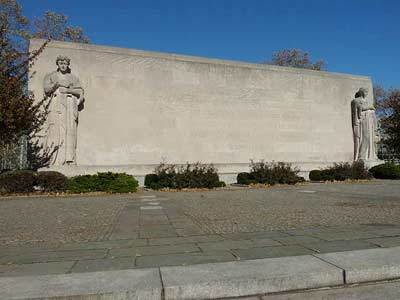 This is a massive, granite and limestone monument dedicated to World War II casualties designed by Stuart Constable, Gilmore D. Clarke and W. Earle Andrews, with allegorical depictions of family and bravery by sculptor Charles Keck, who passed away the same year they were unveiled, in 1951. It was part of a 5-borough plan by Parks Commissioner Robert Moses to construct five WWII monuments in each borough, but only Brooklyn’s was completed. Brooklyn’s war memorial was originally planned to be even more massive, with a central auditorium flanked by two wings, but it was scaled down for materials and money shortages.

The real artifact, though, isn’t the memorial itself but what’s under it. Today the memorial contains administration offices and rest rooms in the basement. But there’s something of real interest… 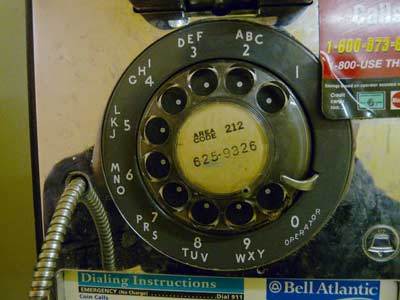 Adjacent to the men’s room, there’s a pay phone, but it’s not just any pay phone. This is one of the last rotary dial public pay phones in existence in New York City. Undoubtedly there are rotary dial phones in phone booths clinging to life in private residences, restaurants and bars; the NYC Public Library on 5th Avenue still has wood phone booths, though I have not checked for rotary dials, and Tekserve, an Apple computer repair place on West 23rd near 6th Avenue, also has a wood payphone booth.

This specimen is so old it still has a 212 area code on its dial, and an affixed Bell Atlantic logo. Bell Atlantic existed between 1984, when it was formed after the breakup of the AT&T/Bell system monopoly, and 2000, when it merged with GTE to become Verizon.

Rotary dial phones have been in existence since 1892, when a patent for the dial was obtained by an undertaker named Almon Brown Strowger. However, the rotary dial didn’t assume its present shape until a variety with holes for fingers was introduced in 1904 and finally saw widespread distribution in 1919. The dial was phased out beginning in the 1960s when pushbutton dialing was introduced. The first TouchTone phone appeared at the Seattle World’s Fair in 1962. 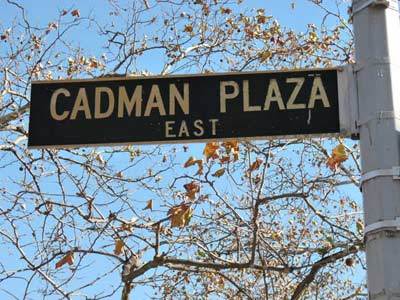 In addition, just outside the park on a Cadman Plaza East lamppost is affixed one of Brooklyn’s last remaining color-coded vinyl/metal street signs, which first appeared in 1964; the Department of Transportation commenced a phaseout in 1984 and converted to green signs in most areas. In the 1950s, Washington Street between Johnson and Prospect Streets was renamed Cadman Plaza East.

Kevin Walsh is the webmaster of the award-winning website Forgotten NY,  and the author of the books Forgotten New York and also, with the Greater Astoria Historical Society, Forgotten Queens.