A simple "1-5" survey wouldn't do the American medical system's incompetence justice, and this coming from someone who's lucky enough to have insurance. 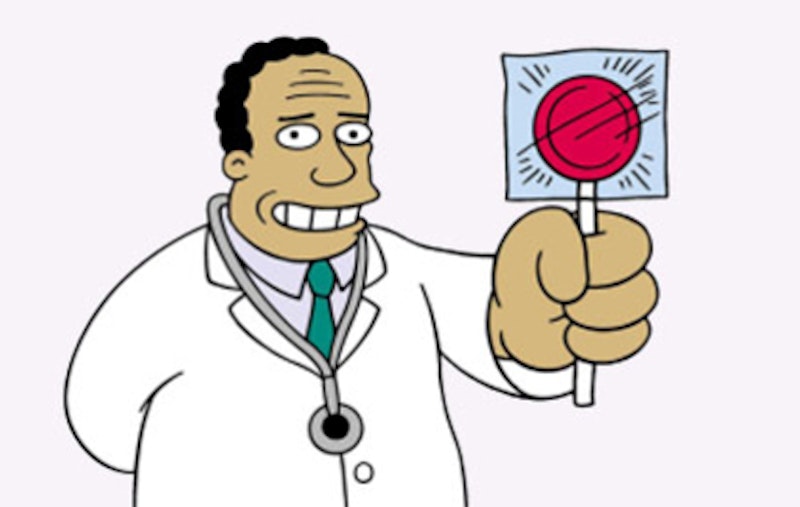 I received a voicemail message the other day from the hospital where I was a patient a week earlier. Let’s call it National Hospital as a courtesy. The message said, “Hello Demian. This is National Hospital calling to ask if you would please fill out a survey that will be coming to you in the mail shortly, rating us on your stay here. We hope you will give us a five, since that is the service that we strive to achieve here.” Well, National Hospital, I have no intention of filling out your survey, but here’s your review.

When I got the message, I was speeding down I-83, heading for the Rite Aid near my apartment to pick up medication. Normally, this wouldn’t have been a big deal if it had been cold or sore throat vaccines I was after, but on this particular day, it was essential to take the medication at noon and I was four hours late. This was after waiting from nine a.m. to three p.m. for a callback from the doctor who was supposed to tell me whether or not to continue the medication.

I had picked up the prescription from this particular Rite Aid a few days earlier, but still had three doses left on my prescription of seven. The employees had no idea what I was talking about when I mentioned this, and had apparently lost either my paperwork or my medicine as I was losing my mind. They directed me to “the next closest Rite Aid” which was a half hour away.

Now four-and-a-half hours late for taking my meds, the doctor finally got around to answering the four voicemail messages I had left him through the course of the day. He confirmed that, yes, I did need to take my medicine four-and-a-half hours ago, and as a bonus, my blood work from the day before had mysteriously vanished.

I raced to the Rite Aid, trolled through a traffic jam, got lost, and ended up finally getting my prescription at five-thirty. It was a small syringe, similar to an Epi Pen, injected in the stomach. As someone who normally has a paralyzing fear of needles it usually took me at least 10 minutes to work up the courage to perform this task, but now I was so jacked up with adrenaline that I got into my car, blasted the radio and just did it without even a wince.

But very little of that story has to do with National Hospital. About two weeks ago, I noticed a pain in my upper calf. As an avid runner, I assumed it was simply muscular and left it alone for a while. A few days later I could barely walk, stricken with searing bursts of pain every time my foot touched the ground. I hobbled over to the hospital, assuming I had pulled or torn a tendon.

They wheeled me down into the bowels of the hospital basement, propped me on a bed and began performing a sonogram on my leg. The doctor moved the sensor up the calf from the ankle, and when it finally came to the area where I was feeling pain, he uttered two simple words and I knew I wasn’t going to be going home anytime soon. “Holy shit.”

I had a sizable blood clot in a small vein in my leg. So they wheeled me back upstairs, hooked me up to an IV of Heparin and started running all sorts of tests, poking me with needles, drawing blood, taking measurements, injecting, inspecting, and all other sorts of horrible, uncomfortable procedures, I sat back and wondered how it happened.

As I soon learned, they were in a similar predicament. One of the three doctors handed me a sheet of paper on what they believed to be my condition. It had a list of several criteria that would result in blood clotting, absolutely none of which applied to me. I wasn’t old, I was active, didn’t smoke, hadn’t gone on any long trips, had no history of blood clots in my family, and wasn’t taking birth control.

So I was laid up in a hospital bed next to a guy I called Cancer John for three days while they continued running their tests all day from six a.m. until about 10 p.m., each result coming back negative. One of the doctors said, “You’re a mystery, Demian. You’re baffling us.” Great.

The clot didn’t even really bother me. What ticked me off were the goings-on of the place where I was stuck for those three long days. Maybe it was my bizarre condition, or maybe it was the way the hospital was run, but I’ve never seen such disorganization between the nurses. The IV would stop working randomly, issuing series of painfully annoying beeps for up to an hour before a nurse would come to fix it. Each time I asked for something, whether it was a glass of water or a Tylenol, it would take a minimum of 30 minutes to arrive. Individual nurses’ shifts changed constantly and so did the way I was treated. Blood tests were irregular and sporadic and each nurse would tell me to do different things or keep my leg in different positions. One nurse said she needed a urine test on the first day, right before her shift ended, and the jar remained untouched for the duration of my visit.

In fairness, these inconveniences were minor, but what got to me was the feeling of utter helplessness. I couldn’t leave the room or do anything for myself. I was a prisoner to the rules and regulations of National Hospital.

For example, when a friend heard about what had happened, she got on a Greyhound bus from New York City to visit. She arrived in the waiting room at seven in the morning the next day, but visiting hours didn’t start until 11. She kicked up a fuss to no prevail and I did my best to sweet-talk the nurses into letting her come up early.

In response, my nurse of the hour said, “Listen. This is our time. We have to do certain things with you in the time until 11. Your sister (I had to fib) is going to have to wait.” I didn’t see that nurse again all day and my friend was stuck sitting in the waiting room for four hours.

I’m out now and starting to get back into a normal routine, but the doctors still don’t have a clue about what’s wrong. I’m on two forms of blood thinners; Coumadin in pill form and the Arixtra injections, and I’m starting to notice the threats that surround me. I was advised to be careful with knives, to use only electric razors. Each pile of broken glass, every sharp corner or crack in the sidewalk is a health hazard. It’s a life of constant paranoia, but at least it’s better than being holed up with Cancer John. But anyway, there’s your review, National Hospital. I hope we don’t meet again anytime soon.