These days, the only real difference between 22 and 40 is a spouse or two. A look at why we become adults so quickly. 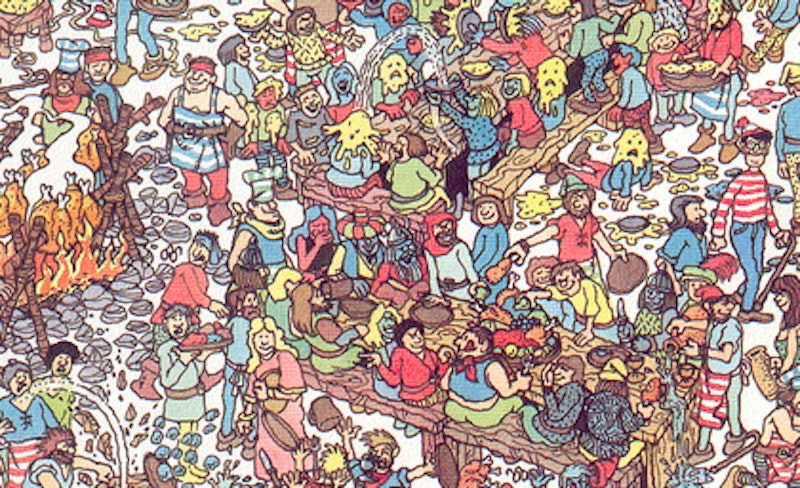 One of the oddest results of blackout drinking is what may be referred to as The Waldo Effect. These symptoms appear a few days, weeks, or maybe even months after the initial blackout period. Not everyone may experience the Effect, as it’s quite dependent on your social and social networking habits, but those who do can find it a bit jarring.

The onset begins innocently enough: you hop on Facebook to do a little strolling through Acquaintance Lane. Maybe you’ll play Scrabulous. Maybe you heard someone got engaged. Maybe you’re just making sure that your ex is still 25 pounds heavier than when you dated. The endgame, though, is always the same with The Waldo Effect. It transpires like so:

You’re sifting through some stranger’s photo album, most likely the sorority sister of that hot girl in your stats class or maybe the weird artsy guy from creative writing with the moderately clever profile. Either way, you’re peeking at “SENIOR YEAR CRAZYNESS 2008! LAST DANCE 4EVR!”—a riveting collection of blurry shots from the local watering hole—when you notice something strange.

At first, you almost click right past photo 17 looking for more random attractive people, but something stops your itchy finger. It’s you, staring right at the camera, just behind the group hug foreground. You have no recollection of even being at the bar and definitely don’t remember seeing that random person. But there you are, like Waldo at the amusement park.

This person, this borderline stranger, has captured an image of you that you don’t remember. You appear only at the whim of this unfamiliar camera. You’re looking into a mirror with someone else’s eyes in a way so devoid of context that you may actually be looking at your real self. Nobody knows who they really are to the outside world. But that’s the cool thing about growing up—you start to get an idea.

At 14, or really anywhere from 12 to 21, the question isn’t what you do; it’s who you are. It’s always possible that I was just a wacko, neurotic head case of a kid, but I used to stay up thinking about it. Am I a good driver? Am I good at sex? Am I nerd? Am I cool? Am I religious? Am I smart?

You hope to know the answers to these questions or can do something to influence the outcome, but mostly you have to just wait. You take your first driving lesson. You lose your virginity. You go to your first party. You give up on God. You give yourself to God. You start to find answers through life experiences.

Sometimes you rely on others for the answers. It’s friends saying they don’t think you’re going to kill them with your driving. It’s that noise she made the fourth time. It’s acceptance from the football players. Or maybe you don’t care what other people think and just do your thing, and find out who you are on your terms. You grow up.

As Americans, we grow up pretty fast compared with the rest of the Western world. This may appear a bit odd considering Europe’s disaffected youths are hanging out in the bars by the time they’re 16 or the fact that all 18- to 21-year-olds in Israel serve in the military.

Talking to an ex-soldier, a few months younger than I am, I couldn’t help but shake the feeling that he was a lot younger than those few months. This was a kid who had been shot and blown up in the 2006 war with Lebanon. He had seen more than most do at our age. Yet, I got the feeling he was just starting out, still trying to find out who he was and what he wanted to be. He may have war stories, but I have a college degree.

Just like many Europeans or Australians, Israelis spend their mid-20s traveling around the world for months at a time. They have little direction or assets, only quick cash jobs to pay for their time abroad and a desire to just screw around. People everywhere else couldn’t believe that my friends had jobs at places like Microsoft or Citigroup by 22, or that I was a bit weird for not having solid plans.

Yeah, some people take a year off or so, but that’s it. More than a year is fairly unacceptable in America. You grow up. Other people think we’re nuts for doing this. As I sit around, pondering what to do with myself at my parents’ place, sometimes I almost agree. Before I got home, I was convinced I wasn’t ready for reality. I’m only 22, right?

The thing is, though, I might actually be ready. We aren’t a generation of little kids running around pretending to be grownups at 22. If you look at the bars of twentysomething America—in places like the Manhattan’s East Village or Lincoln Park, Chicago or Adams Morgan, DC—you’ll find that 22 through 30 mix together pretty seamlessly. The same goes in offices around the country. You’ll probably be working with people around your age, but you won’t be looked down upon for your youth - only your low status on the totem pole.

However, this puzzles me. We’re so much more ready to be real people than the youth of other nations. To tackle this issue, I pulled out my handy metaphorical magnifying glass and pored over the differences in American society versus what we’ll call “European society” to keep it simple, though it obviously applies to more than just Europe.

What do we have that might cause us to grow up faster? Perhaps it’s a culture of fast food and competitive, liberal marketplaces? No way, otherwise the British would be right there with us, and they’re some of the biggest lackadaisical perpetrators.

It has to be something culturally unique to America, as well as something other countries probably think is a bit crazy. The key to understanding the American 22-year-old adult is simple: it’s our colleges. One of our minor flaws as a people is the fact that we like to condense everything. If you can do it in a year, we want to do it in a month. And, honestly, our college experience, which other people find absolutely fascinating and somewhat frightening, is just using four years to do what most people do in a decade. You drink like you have nothing to lose. You go abroad for four months and tell yourself that you’ve seen the world. You have no responsibility. You work transient jobs to help pay for your lifestyle.

You do learn, of course, but we’re a multi-tasking people. You figure out how to be a grownup while you get your sillies out. Our institutions fill students with mottos about providing more than just information from books, but also instructions on how to be a fine citizen. I am ready to go out into the world and be something because I go forth with the know-how that can only come from an old-fashioned American institution. I am ready to take on the whole world with my innovation, my intelligence, and my flip-cup skills.