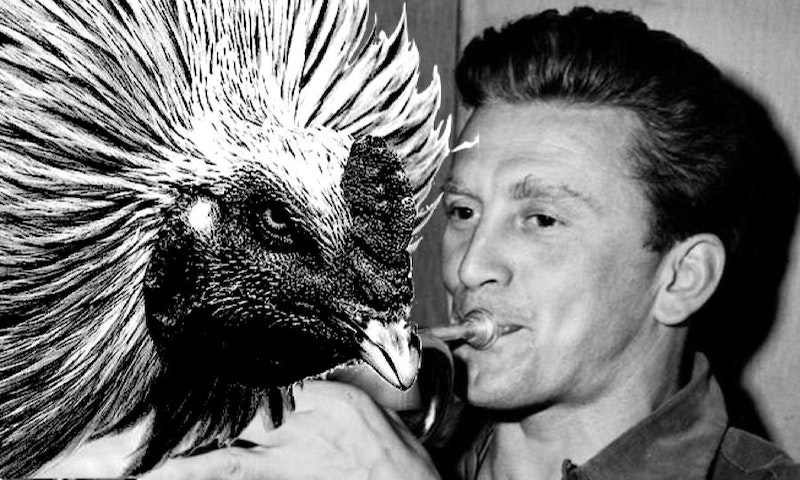 I don’t write these words lightly. I don’t disparage the dead—at least, I try not to make a habit of it. Kirk Douglas described himself as a “son of a bitch” in one of his many books (did you know he wrote novels? Me neither. I concur with his self-assessment. Very nasty man. Douglas lived to be 103, dying in February of this year, but I only knew him in the middle of the last century. Jazz was happening, it was appearing in movies, Black people other than Stepin Fetchit were gaining prime supporting roles. Juano Hernandez was one such man, and I was fortunate enough to work with him on the films Young Man with a Horn, The Breaking Point, Kiss Me Deadly, The Pawnbroker, and They Call Me Mister Tibbs! “Quietly magnificent,” The New York Times once called him, praising his performance in The Breaking Point, but I don’t want to talk about Juano today. I loved Juano, and he deserves his rest.

I want to talk about Kirk.

This was pitched to me as a pickup gig. I played percussion in some of the hipper spots in the Village in the late-1940s and got tipped off on a picture being shot in Hollywood at the time called Young Man with a Horn. Of course it would all be shot on the Warner Brothers lot in Hollywood, but there was a small second unit grabbing material outside of the club I was working at one day. They were fussy, too straight for the scene, but quick and efficient: good workers. I walked up and asked one of them for a cigarette.

“Sup, b.” This wasn’t a man, it was a woman cameramaker—or filmmaker, rather. I still get confused by the memory. She wore big glasses and moved quickly behind the lens, corralling in a manic, restless spirit while “on the job.” Even as she smoked with me, on her break, she was looking at clouds and how the light was passing over buildings. “We may hit Manhattan Henge, Rooster. Mr. Curtiz said he would be especially proud—“ I perked up. “I’m Bennington, not Rooster—“ The woman put two fingers to my beak, two fingers clutching a lit cigarette. “—proud of us if we shot the Manhattan Henge.” I knew when this phenomenon occurred and knew she and her company were S.O.L. But I was too afraid to say anything.

I never saw her again, and never got her name. Many people—men, women, various marsupials—have reminded me of her in the years since. But I gather she was a journeyman—er, rather, journey person of the road, not of her profession. I doubt she stayed in filmmaking long. Then again, who knows, maybe she had a brilliant career under a male pseudonym, but as far as I can tell, no women worked below the line on Michael Curtiz’s 1950 film Young Man with a Horn, starring Kirk Douglas. He did things to me.

I don’t know if I can talk about it… the money is a big incentive, certainly, but do I want to dredge up these sick memories?… these memories of obeisance? degradation?… for which I received nothing?… it doesn’t feel too good, dear reader… something must be getting to me, because now the room is spinning and I can’t remember if I told Monica to—

No. I’m not Rooster. I’m Bennington. I have to face this on my own.

It was the middle of the night. Shooting was nearly complete, and I’d hitched a train to Hollywood the night after I saw the cameraperson of female traits. I made it in time for the wrap party, and Kirk was drunk. Drunk…no, he was obliterated. And rude. And violent. And mean. He grabbed me as soon as he saw me. “EEEEEEE—-EEEEEEP! CHICK-EEE-CHICK-EEE-CHICKEEEEEEEEE!” He ran around the set—a ritzy club I’d never be allowed to play in much less eat at—holding me by my legs with total disregard for my safety. I was banging into this table, knocking over that piano, permanently blinding in one eye this gaffer, it was just nuts. I think I banged my head, too. Didn’t feel right again until I smoked pot for the first time.

Kirk was reckless, Mr. Curtiz had already gone home to prepare for his next movie, and everybody else was at the heel of the star. Kirk was difficult; everyone knew that. So what if he was running around the set drunk holding a “chicken” by its legs? At least he wasn’t raping Natalie Wood (allegedly).

But at some point everyone left. And Kirk did make his move. This was the 1950s, so I wasn’t necessarily opposed to the idea, and Kirk was nothing if not the statue of virility, but I don’t fuck drunks. Hard rule of mine. But I think he misunderstood. When I went for his dick, he grabbed his prop trumpet and started banging it everywhere, missing me completely, and by the time I got the hint and he found me I’d flown away. I heard him screaming that awful slur “CHICKEN CHICKEN CHICKEN!” over and over but paid no mind. I was back in New York in three days.

There was no furor, no retribution, no one to file a complaint with. This was 1949… by the time the film came out in 1950, I was already onto my next beat: poetry. I was horrible at it. But I was never a particularly good percussion player, either. You really don’t have to learn anything in depth—if you’re smart enough (I am), it would be wise to live as a jack-of-all-trades, master of… to be determined? You have to keep people guessing. I was too naive, too blithe a spirit in the middle of the 20th century to stay in Hollywood. I could’ve become a film star, but I didn’t want to compromise my soul, my essence. I’m an artist.

Kirk Douglas blackballed me—I mean blacklisted. Kind of ironic, given his history with the rehabilitation of Dalton Trumbo’s reputation. But Spartacus would come 10 years later, and by then I was seven revolutions beyond, guzzling LSD in government facilities and reading about Lenin. I’ll tell you all about that some other time, but now I have to go home. My wife Monica is waiting for me.