In which our intrepid columnist buys a disappointing Trader Joe’s product but doesn’t cry about it like some Wall Street fat cat. 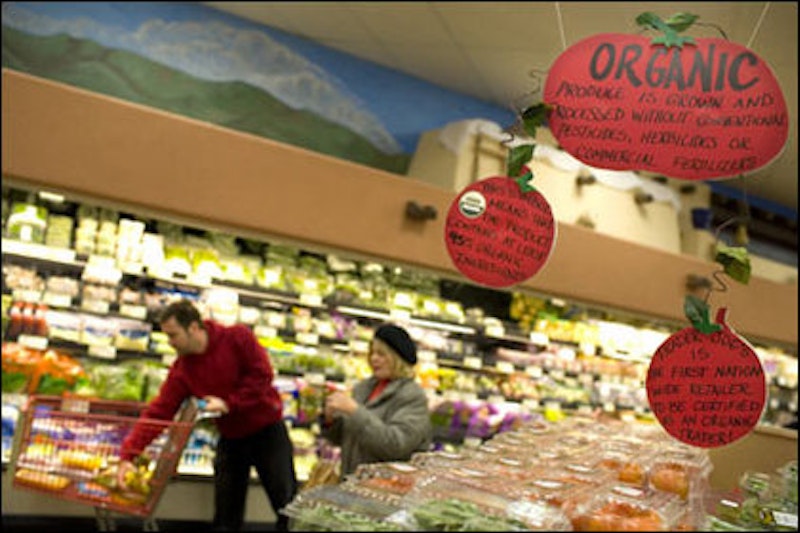 Now look, I’m not a financial expert or anything, but I heard all about this “Bear Stearns” company that went broke because they played this “Hedge Fund” casino-type game, businesswise, which is where giant companies hire guys they think are financial geniuses to play the stock markets and all those other markets, and what they do is constantly juggle bets against themselves or something like that with billions of dollars in all directions at the same time so these rich motherfuckers who have so much money they gotta keep it moving or they're gonna lose it don’t get too deep in any one game and watch all their dough evaporate. Or something.

I totally don’t understand this “Hedge Fund” on the micro or macroeconomics tips, and usually I would go and look at some crap on the Internet, but you know, this time, I am not inclined to go looking at Google or Wikipedia or any of that shit because it’s all too much like, I dunno, math or some shit that would basically just make my head hurt when it could be regarding, like, more pleasant things, you know, like snack food and stuff.

It’s exciting to seek out, purchase, and consume new kinds of snack food, you know? I am a snack food enthusiast, if you will. I even just like the word “snack,” you know? Snack. Plus it’s a noun and a verb, which is fun for you English Majors, eh? It’s totally Good Times to experiment with novel snack foods, man, in moderation, of course, yes? Like the other day I went to this grocery store called “Trader Joe’s,” which is a national chain where you can get deals on food items and also buy like, things to eat which are responsible to the Earth; organically and free-trade stuff like that which you can stick in your food-hole, but I’m there for the deals, see?

Like peanut butter, seriously, this place sells some kickass peanut butter in both crunchy and smoothy, and it’s “natural” or whatever, but I don’t care, because it tastes good. But also, the snack food, man, are you an aficionado? Ohh, they had bags of these sawed-off nubs of pretzel with different stuff inside, and I dunno, I guess I was suffering from a specific Vitamin Deficiency that could only be cured by exposure to massive doses of Peanut in Butter form, so I found myself captivated by these ones that had peanut butter inside of ‘em, the pretzels. But they didn’t look all salt-licky like the “Combos” snack product, which is a completely kickass snack food, however, in my snacky-opinion, only when it is a cheese-type filled Combo, such as the Nacho.

I couldn’t tell if these non-Combo pretzel-deals were stuffed with the smooth or the crunchy PB, but I figured smooth, right? Easier to shove into the pretzel? So now I’m totally in Supermarket Sweep mode, and I grabbed a bag of these Asian-type little shiny glutinous-rice sticks wrapped in seaweed, and a bag of “Blood Oranges” which in my mind qualify as a snack because they are brightly colored and don’t look like normal boring fruit. And also some sorta cereal that is a knockoff of the popular “Honey Bunches of Oats” stuff, total Snack.

Then I went to a normal grocery store, I forget why, but I saw a display of Passover stuff, and there were bags of Manischewitz potato chips, and I went for a bag of the crinkle-cut ones because I know most kinds of potato chips are Kosher, but I figured I would, in the interests of World Peace and the unity of all beings, enjoy what appeared to be a Passover snack food.

Anyway, the little rice-sticks were fucking horrible. Complete waste of my snack dollar, big time. But I didn’t go crying to the fucking Government to like, give me back my money because I crapped out in my little snack Hedge Fund, see?  Why the fuck does some other big-money company get to buy this fucking Bear Stearns for two bucks or whatever just because the Bear took a big shit in the Wall Street? Look, I don’t have to understand anything to have an opinion, Okay? Jesus Christ, J.P. Morgan? Are they gonna buy the guy who decides the Interest Rate too? Do they even have to? This “hedge fund” shit is like all these old black-and-white movies about when the Stock Market crashed, Great Depression-Recession and all that, and these guys with striped suits and cigars took headers out the windows of their skyscrapers because they thought they were fucking geniuses who could run fucking Wall Street, you know?

Now I certainly don’t wanna see any messes on the sidewalk, but no Rich Guys are gonna get hurt by this, I bet. Yeah, it’s gonna be all “employees” and like that who're gonna get it right in the neck. Or the Stock Option, I guess. I sure am glad I don't have any Stock Options, man. They would totally be all Enron-Bear Stearns, you know? So the goddamn banks or whatever the fuck kind of Machines come up with these house loans that are killing everybody with these adjustable balloon things and all of a sudden the interest is up your ass because you didn’t caveat emptor, and the “Hedge Fund” guys drill their little proboscis into errbody’s wallet, little people, average American, and then the whole thing craps out and me and my goddamn Tax Dollars At Work gotta spread some cash around so some other fucking Gigantic Money Company can buy the played-out Company at a low-low Discount Price and I still haven’t seen Dollar one of my goddamn fucking Stimulus Package!

“Hedge Fund” is the same as “hedge your bets,” and that’s fucking gambling, man, and bullshit on all these fucking do-overs, you know? I didn't get my money back last time I went to fucking Vegas. And that includes those fucking Primary elections in Florida and whatever other state they Primary’d in and now they want do-overs, man, cut that shit out and Move On dot org, you know? And where did all that money go from the Hedge, hah? When you go to a casino to piss away some cash For Amusemmment Only, you know the House Always Wins, but at least you know the who the House is, right? Now John and Jane Taxpayer gotta cover this bet, and that’s like Communism or something, which at this point would be fine with me if it would mean I get free snacks.