On Spring Break, it’s not just girls who gain confidence from looking hot, but guys too. If you want to solve the problem of college kids gone wild, you have to include both men and women in the equation. 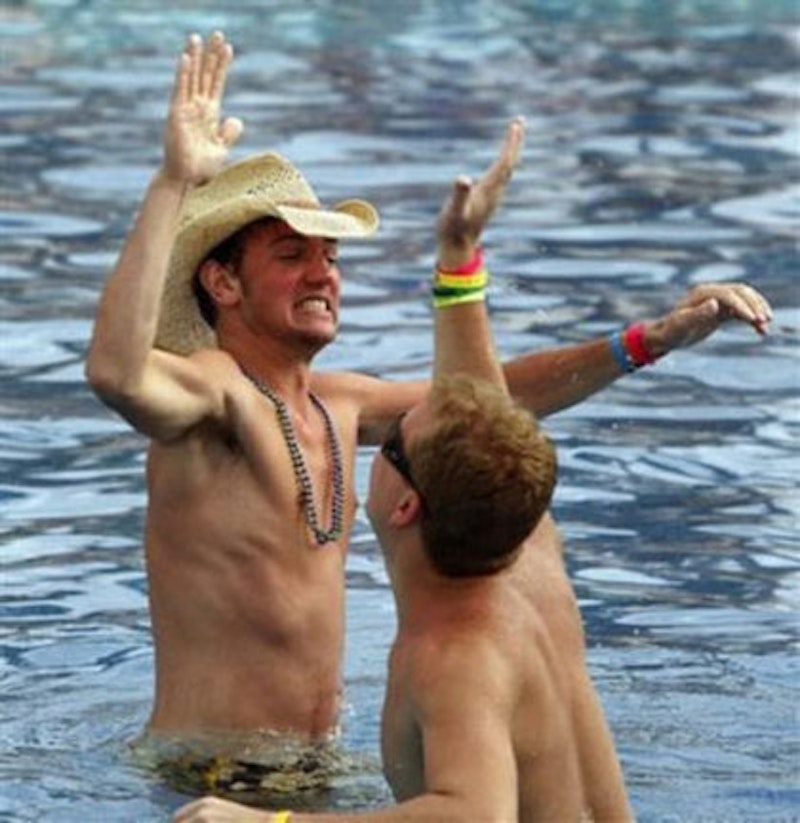 March is a good month to be young and in college. Between St. Patrick’s Day revelry, Spring Break siestas and nearly non-stop NCAA basketball for the better part of the month, it’s a chance to just kick back and relax, forget about the rigors of academic life and get so hammered that you barely remember who you are in the morning. But while all this drunken debauchery might make for a good time, it isn’t exactly safe, it’s certainly not classy and, for Los Angeles Times columnist Meghan Daum, it shows that young women still define their self-worth in unhealthy ways.

Based on reports she received while visiting Cancun a few years back, Daum concludes that young women are not simply celebrating their youth, freedom and a respite from the hard work of a winter semester, but rather adhering to the age-old belief that a woman’s confidence should derive from her beauty and sex appeal rather than her intelligence or personality. “One word I heard again and again, oddly, was ‘confidence,’” she writes. According to Daum, young women saw Spring Break as an opportunity to display their hotness and viewed such an accomplishment as “the largest factor in the equation of their self-worth.”

While such reports are not especially uplifting coming from the young women who will soon be leaders in the cultural and political spheres of our society, they are also not, as Daum points out, all that surprising. They are on Spring Break, after all. If someone were to ask me what I wanted to do with my life while I was sipping a margarita and lying out to tan, I’d be far more inclined to answer “that hot guy over there,” than “develop an economically viable alternative energy source that will reverse the damaging effects of global warming.” In the context of relaxation and academic escape, I wouldn’t be looking to define myself, or my future, in terms of my intellectual capabilities. I'd be more worried about not having a clean shirt to wear to the club that night than whether or not the guy grinding against me on the dance floor knew that I'm on pace to graduate with honors.

But all the same, Daum has a good point: women have come too far to value their worth only in terms of their sexuality, no matter what the context. It is not her implication of women that offends me, but her total exclusion of men. It takes two people to create a regrettable one-night stand and while young women should be responsible for their own decision-making, inebriated or otherwise, men should also be expected to practice good judgment. If women are encouraged to behave like the classic good girl, coyly hiding their sexuality, then men should have to revert back to role of knight in shining armor, shepherding intoxicated females to safety and looking out for their general well-being. The fact of the matter is, male or female, Spring Breakers are young, drunk and horny. There’s no real difference in the way they behave, and there’s no real difference in what the ritual means for their self-esteem. Daum is 100 percent correct that young women prepare for Spring Break like they would a final exam. They spend hours at the gym and in tanning booths and waxing salons. What Daum fails to point out, however, is that men do the exact same thing (maybe minus the waxing).

Being female, I don’t have any insight into the inner workings of the male brain, but I did spend two years of college living in a house with six guys and I assure you, concern about hotness is not a female phenomenon. If the number of women on elliptical machines and treadmills doubles in the two weeks before Spring Break, the number of men in the weight room surely swells equally. Even the guys that I lived with—who were otherwise content to be total couch potatoes and ordered a late night pizza special so often that they referred to it by an abbreviated name—suddenly became daily gym rats, trudging through the February snow and bitter cold to pump iron as Spring Break approached. And I distinctly remember one serious debate about whether or not it was okay for a guy to go tanning in preparation for his vacation. They weren’t frilly guys, or preppy guys or even part of a frat. They were just regular guys who, like girls, cared about their physical appearance and wanted to look their best when dressed in far less clothing than they had worn in months.

I’ll admit that the out-of-control binge drinking and hyper-sexuality of Spring Break is not the most admirable part of the college experience. We should be seriously exploring why this behavior is so prominent and how we might promote a more responsible and reasonable party culture. But we cannot simply point the finger at wild girls and berate them for equating sexuality with power. For every woman that lets a man lick tequila shots off her body, there has to be a man who does the licking.  And for every girl standing in front of a mirror in some Puerto Vallarta hotel room worrying if her hair looks okay, there’s a guy in the next room over, doing the exact same thing.