Breaking down the ups and downs of everyone's favorite thrill ride. From The Whitworthian. 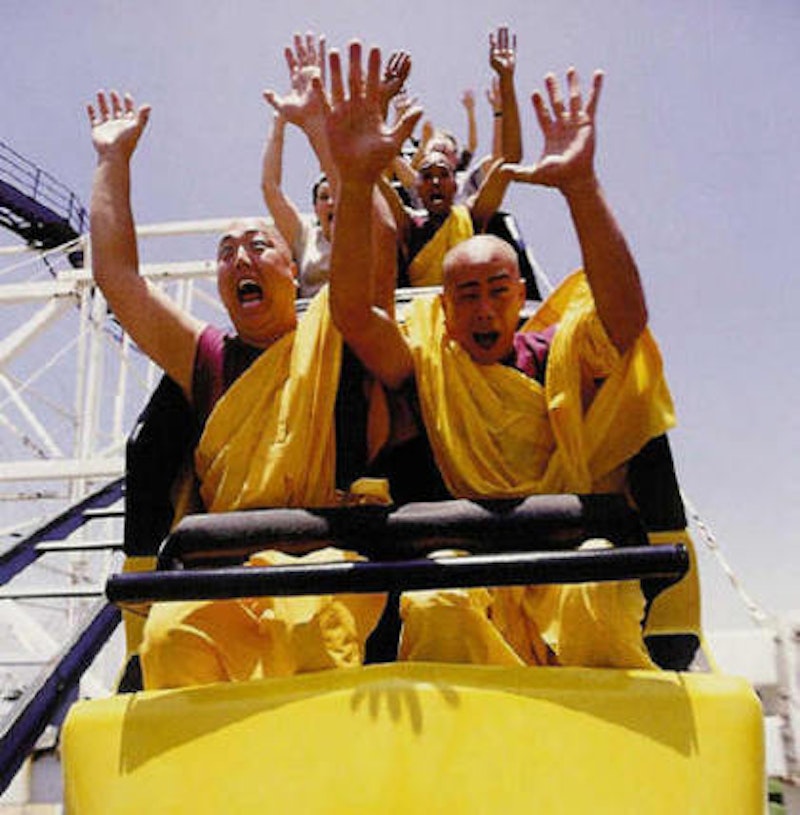 Unlike most people, I don't like fear. I find it scary. I'm not the type to play daredevil games like "Chicken" or "Russian Roulette" or "Bloody Knuckles" or "Risk: Lord of the Rings Edition." Some like to frolic on the wild side. Scaling the outside of Warren Hall naked! Blindfolded underground street racing, driving with only their knees! Naked! Punching Dick Mandeville in the face and then running away as fast and naked as they can!

I like excitement too, but I prefer the ribald excitement of reading a good book or listening to a Podcast I disagree with. Clothed.

So a lot of the gut-tumbling, g-force gratuitousness of the American Amusement park doesn't appeal to me. Oh, I'll take a whirl on the Tilt-a-Whirl or Whack the occasional Mole if it gets uppity enough. But generally, I spend most of my time signaling, yielding and apologizing in the bumper cars.

Amusement parks are iconic. The deep-fried Cotton Candy, the soggy Corndawgs,™ the Midway games where you get to knock over stuff with a gun - you don't get much more American Dream than that.

But generally, the prize for most attractive attraction goes to the ever-winding loops and swoops of the rollercoaster.

Riding a rollercoaster is like an emotional rollercoaster. As you sit down, strap in, put on the foam restraints and don Water Wings in case of a water landing, you feel pretty confident.

Then the requisite 17-year-old with acne slurs through the obligatory safety message with a weary monotone. "Welcome to the exciting death-defying thrill ride of 'The Flaming Guillotine.' 'The Flaming Guillotine' is considering a 'Loco' class attraction and as such should not be experienced by little babies, the old, the sleepy, your sick, your poor, your huddled masses or anyone who was caught crying, recently, at that part in 'Land Before Time' where Littlefoot's mom dies. Pregnant women should not ride this ride, because their baby will come out looking, permanently, like Alice Cooper. CarnyCorp is not held legally responsible for any failure of mechanics, hearts, or bowels. Enjoy the ride. It may be your last."

Your stomach begins to churn as the coaster starts rolling, chains pulling it slowly, ominously, upward.

Uh-oh. We're building up a lot of 'potential energy.' With this many 'megajoules' were going to come crashing down with the 'velocity' of a thousand gravitons.

So this is it. This is how I die. Not with a bang, but with a zoom-boom-splat. And I never told her I loved her. I mean, I DIDN'T love her, but that sure would have been hecka poignant.

Maybe I chose the wrong religion! Maybe the dude with all the arms is the true Messiah ...ohcrapohcrapohcrap.

You know those pictures automatically snapped during the ride they sell in the gift shop for 30 bucks? In my case, they usually show my face, frozen in contorted horror, as an abstract mashup of the dude from Edvard Munch's "The Scream" and Ren from "Ren and Stimpy."

If you look closely, you can even see what remains of my stomach, trailing three seats behind.

Not every amusement park, of course, cares about instilling sheer terror. Theme parks are more concerned with the merchandising opportunities. Good theme parks always have a theme based around licensed cartoon characters, like Ziggy, or the Charmin bear, or Mr. Yuk. Everything - the rides, the food, the toilets, the pickpockets - all center on this theme. The themiest theme park in all of ThemeTown, of course, is a world founded by Walt Disney: Disneyland.

Walt Disney, of course, was a cartoonist driven to insanity after a steamboat accident left him horribly scarred. The increasingly paranoid Disney tasked his engineers to create an unassailable stronghold deep in the heart of Southern California.

Perched like a gargoyle high atop his twisted fortress, the Cinderella Princess Castle, Disney surrounded himself with elaborate snares - crocodile-infested rivers, canyons booby-trapped with dynamite, 3D Michael Jacksons, and most fiendish of all, long lines and outrageous ticket prices.

Worse, in the labyrinthine system of tunnels under the park, the mad genius bred a race of disfigured foam people to do his bidding. Most of these abominations appeared as animals with grotesque and exaggerated features, clad mockingly in the clothes of humans.

To this day, if you come to Disneyland you may spot one of these poor creatures venturing timidly into daylight.

They will stare at you, with those mercilessly unblinking eyes. And not say a word.

Disney now lies frozen at the peak of the Matterhorn, waiting to return when the world needs his unique mixture of talent and anti-Semitism once more.

The Whitworthian sent me on a fact-finding mission to Disneyland when I was 10. I fact-found these facts:

2. Mr. Toad's Wild Ride is a perfect first lesson in Calvinism. You can twist the Steering Wheel of Free Will all you want, trying to avoid the Brick Walls of despair and the Weasels of Tribulation but you can't escape the Track of Predestination.

3. The Pirates of the Caribbean ride parallels the movie franchise almost perfectly: It starts out pretty awesome and goes gradually downhill from there. Also, there's pirates.

4. Space Mountain typifies Disney's penchant for irony. Isn't the entire point of space, by definition, the lack of mountains? Space Mountain is kept pitch black to prevent "Space Cadets" from seeing all the "Space Vomit" splotching the "Space Floor."

Oh, you may not be fazed by most amusement park rides.

You may plummet 500 feet on the "Free Fall Esophagus" without a flinch, or brave the centrifugal chaos of the "Spinning Luge of Terror" without a twitch.

But it's not until you're trapped in a tiny boat in a dark room surrounded by Dutch robo-children mindlessly chanting the same words over and over and over again that you truly know the meaning of fear.