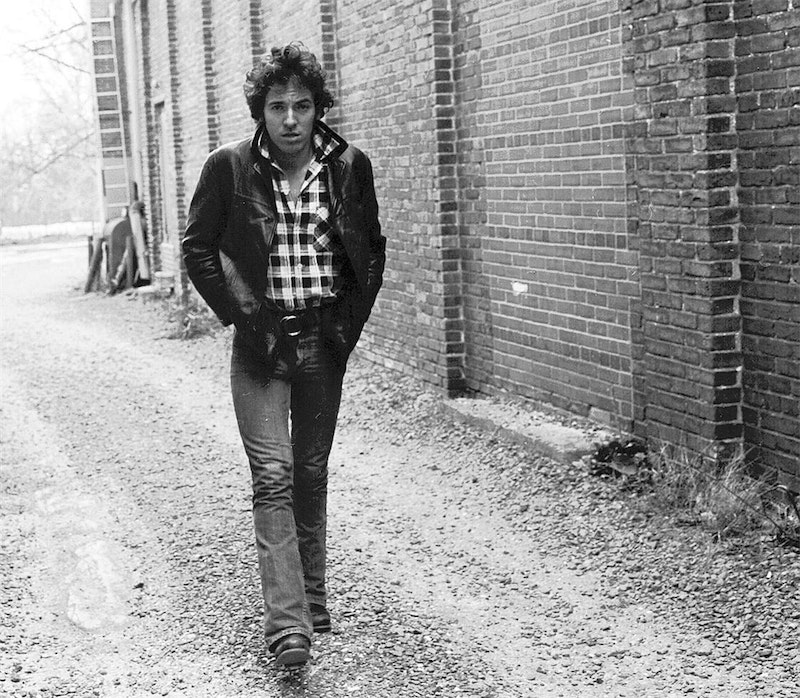 Last week I read a well-meaning but awful essay in The New York Times by Sarfraz Manzoor, co-writer of the current film Blinded by the Light, which is based on his memoir Greetings from Bury Park. Manzoor, who grew up in Britain in the Thatcher 1970s and 80s, an immigrant from Pakistan who regularly suffered discrimination, says his hopes were placed in America, “an idea and ideal.” His most significant inspiration was Bruce Springsteen.

He writes: “I was introduced to Springsteen’s music in the fall of 1987 by a Sikh friend at sixth form, the college British students attended between high school and university. He claimed that Springsteen was the direct line to all that was true in the world. Once I started listening, it was confirmed as nothing but the truth… In Springsteen’s music I saw America as a land of hope and dreams. It was a nation that had its challenges but it was a generous-hearted place. If Britain would not accept me, I would be reborn in the U.S.A.”

Manzoor’s is a success story, of the kind that immigrants have shared for 150 years, and still do, despite America’s sickening Nativism that’s infected a majority of the country, with Trump as a cheerleader. However, in his zeal for hope, Manzoor projected what he wanted from Springsteen’s catalog of songs. (Springsteen, as an outwardly modest and generous man—if usually cloistered within his New Jersey estate—would never claim he had a “direct line to all that was true in the world.”

Manzoor’s misreading of Springsteen’s songs is acute: after the ebullient early records, especially the anthems “Born to Run” and “Promised Land,” Springsteen went darker and darker about America. While he accumulated wealth, he wrote about citizens whose dreams were shattered. Who wants to be the narrator in 1980's “The River”? A teen who knocked up his girlfriend, went to work in construction, but his hours were cut down and wife “Mary acts like she don’t care.”

And there’s the bleak “Glory Days” from Springsteen’s biggest breakout album Born in the U.S.A. He writes about washed-up and down-on-their-luck middle-aged friends he remembers from high school when they were star athletes and pretty girls who turned up their noses at their inferiors. It’s not an uncommon theme, but how Manzoor derived inspiration from these broken-down Americans who sit at a bar and tell the same “boring stories of glory days” is beyond me.

The final stanza of 1987’s beautifully-written “Brilliant Disguise,” about a cheating spouse, is another example of Manzoor mistaking what he thinks he’s looking for. “Tonight our bed is cold/I’m lost in the darkness of our love/God have mercy on the man/Who doubts what he’s sure of.”

One more: Springsteen’s 1980 “Atlantic City,” from the very bleak Nebraska, is another standout from his collection of songs, but again, its bleakness is overwhelming. “Now I been lookin’ for a job but it’s hard to find/Down here it’s just winners and losers and don’t get caught on the wrong side of that line/Well I’m tired of comin’ out on the losin’ end/So honey last night I met this guy and I’m gonna do a little favor for him.”

If Springsteen’s songs lifted the spirits of young Manzoor, marooned in an unforgiving England, more power to him, but his misinterpretation of Springsteen’s “hope and dreams” is naive.

The term “Trump Derangement Syndrome” is moldier than six-month old Wonder Bread by now, yet it’s still an accurate diagnosis for those who wake up angry every day that the incumbent president remains in office. One example is Noah Berlatsky—a longtime contributor to Splice Today and a rotating number of other sites—who ventures outside of his Chicago home and has to scurry back for all the fascists/Nazis he sees on the streets. Noah’s a self-described neurotic—there are worse maladies—who whips himself into a fury on almost a daily basis at Twitter. It’s fortunate he has a supportive wife and son or otherwise he’d be in a straitjacket.

Consider this whopper from September 7th: “All of the left media is going to be closed down by the 2020 election.” He’s referring in particular to the recent closing of ThinkProgress (at least the unionized employees) and Pacific Standard, and in general, I believe, of some kind of government violation of the First Amendment. Perhaps he was in a reverie, and his mind went back in time to the Woodrow Wilson administration. As Noah writes frequently on Twitter, “idk.”

I’m picking on Noah because I know him—at least in a remote way; we’ve never met—and he’s so excitable (and also acts as one of 10,000 hall monitors on Twitter, telling objectionable people to “reexamine” their lives, and whatever the current version the old standby, “delete your account” is) but he has legions of comrades in the fight against Trump’s Fascist State.

Yet the fact that a journalist who’s published three or four times a week really believes “all left media will be closed down by the 2016 election” is remarkable. It’s true that media in general—left, right, or as St. John McCain might’ve said, vegetarian—is in the toilet and the industry hasn’t shown many signs of revival (although The New York Times Company’s trading value has skyrocketed since Trump’s election.) But does Noah and his ilk really believe that The Atlantic, Harper’s, The New York Times (although he’d regard the paper that publishes Paul Krugman, Gail Collins, Maureen Dowd, David Leonhardt, Jamelle Bouie, Michelle Goldberg, Charles Blow and other lefty blowhards, is center-right), the scattershot Washington Post, The Nation (which refuses to die), Vox, The New Yorker, Mother Jones, New York (which, although a politically lefty/culturally upscale combo, still tries to scam subscribers; I just received another letter saying, “LAST NOTICE,” even though my sub isn’t up for six months), CNN, MSNBC and the ghost of Walter Cronkite will all cease to exist by November of next year?

That hallucination, in a nutshell, is textbook Trump Derangement Syndrome.