Chernobyl and the Radioactivity of Soviet Communism

Did Craig Mazin, Ted Cruz's roommate at Princeton, deduce the evils of communism by looking at it? 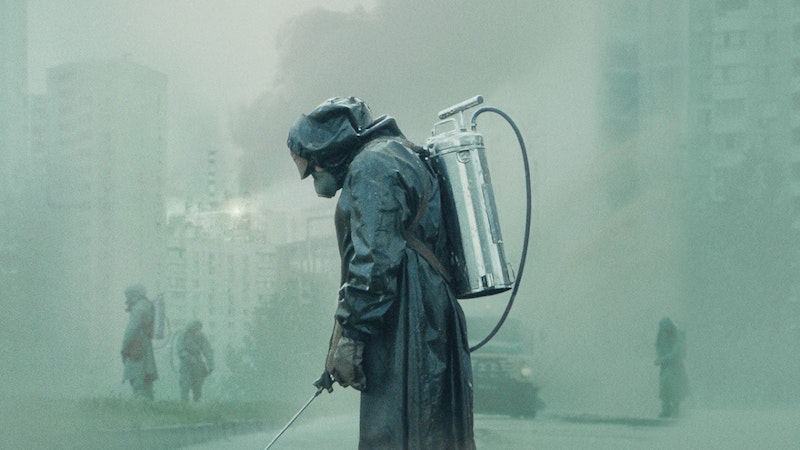 Among the miscellanea inside Princeton’s Firestone Library, among the discarded possessions of alumni such as Bill Bradley and Brooke Shields, between the former’s shoelaces and the latter’s Calvin Klein jeans, on the same gunmetal shelf—beneath a cloud cover of asbestos and artificial light—lies a Quaker inside a Cuban.

Sewn inside the virgin whiteness of that muslin is the face of Benjamin Franklin.

Does that cloth explain Craig Mazin’s script for HBO’s Chernobyl?

Did Mazin, who was Cruz’s freshman-year roommate at Princeton, deduce the evils of communism by looking at it?

Is radiation the reason why it’s white, despite more than a half-century of wear but no tear, despite a boat ride from Cuba to Florida, followed by a two-day bus trip to Texas, despite the excretions—and exertions—of Cruz père, is that talisman tainted with plutonium?

Mazin’s Chernobyl is the most thorough indictment of communism since the events it dramatizes. More eloquent than the speeches of Cruz fils. More powerful than Ted Cruz, who was born amidst the plains and oil fields of a provincial but providential state: Alberta, Canada.

By inverting Ronald Reagan’s fantasy about sharing a trip aboard Marine One with Mikhail Gorbachev, wherein the president would point to the private homes “with little backyard swimming pools” and automobiles in the driveways as proof of the greatness of America, Mazin changes the flight path between the White House and Camp David.

He takes us inside a Soviet Naval helicopter, heading toward a column of burning graphite. In less than 85 seconds, he reduces an empire of 11 time zones, from the ruins of Central Europe to the rivers between Russia and Red China, into a drama about the life and death of a superpower. In less than 90 seconds, we see the incompatibility—the combustibility—between the laws of physics and the metaphysics of communism, between a scientist’s plea for the pilot to reverse course and a politician’s order to stay the course, between shouting at the scientist and threatening to shoot the pilot.

In this battle between reason and faith, where the worst sin is not to question God but to challenge the chain of command, where it is more dangerous for a faithful servant of godless communism to get his way, where, to avoid a short but agonizing death, the pilot finds religion and listens to the scientist, in this battle lies the god that failed.

This scene between Valery Legasov (Jared Harris) and Boris Shcherbina (Stellan Skarsgård) is dramatic. That Shcherbina comes to his senses, that he reveals himself to be a cynic in communist clothing, that the color of his uniform matches the mood of his countrymen, that uniformity of appearance is a disguise for almost universal contempt for the Kremlin, is the overarching theme of this five-episode miniseries.

We see the evil of banality, not the banality of evil, where a former shoemaker overrules the conclusions of a nuclear physicist. We see how one man, a Goebbels with the waistline of Göring, controls the news by censoring all the news that is fit to print.

We see a simulacrum of Soviet life, the misery of central planning and the tyranny of urban planners. We see the apartment complexes that house Chernobyl’s workers: behemoths of Brutalist architecture, not unlike the housing projects (since razed) in Chicago and the South Bronx. We see the corruption of Louis Sullivan’s maxim that form follows function. We see the deliberate severing of form and function, thereby preventing a spiritual union between the two.

The forms we see condition residents to function a certain way: to obey.

The forms reflect a Marxist approach toward humanity, as if all that matters is matter; as if we can manipulate any kind of matter, except nuclear matter; as if we can darken and stain a great man’s words with a bureaucrat’s blueprints; as if we can shape buildings to shape peoples—the Poles, the Czechs, the Russians, the Ukrainians—to operate like machines; as if no one can stop the gears, wheels, and levers of the entire apparatus known as the Union of Soviet Socialist Republics (USSR).